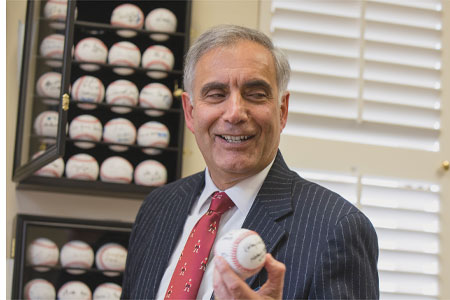 USC President Harris Pastides has quite a collection of autographed baseballs — signed by scholars, entertainers and other distinguished guests to campus in the past 10 years.

Maybe you got it as a kid leaning over the fence during batting practice and shouting out your favorite ballplayer’s name, maybe you got it later in life when you happened to meet that favorite ballplayer from childhood and handed him a Sharpie — for dedicated baseball fans, it’s not that unusual to have picked up an autograph or two over the years.

That’s certainly true for University of South Carolina President Harris Pastides. Growing up in New York City, he listened religiously to Yankee games on his transistor radio, watched Mickey Mantle and future Gamecock head coach Bobby Richardson on a black-and-white TV and took in one glorious game a year at Yankee Stadium with his parents, both immigrants from Cyprus.

“Baseball was the main way I assimilated, being a bilingual kid,” says Pastides, who marks a decade as president in 2018. “It was a great equalizer because I was a pretty good short stop on the little league team. It went from being teased to, ‘Hey, I want Harris on my team.’ ”

Years later, when the Gamecocks won their first of two College World Series titles in 2010, Pastides’ lifelong love affair with the American pastime became the subject of conversation — and the handful of autographs he collected as a child sparked an unusual idea.

“People would ask me about our baseball team — including visiting dignitaries, authors, musicians, Nobel laureates,” says Pastides. “I thought it would be nice, as a reflection of the distinguished people who come here, to ask them to sign a ball rather than a piece of paper. What I immediately noticed was that they were happy to oblige.”

And the collection continues to grow, each ball going into one of several cases mounted to the wall of his office in the Osborne Administration Building.

“When dignitaries visit the university, it’s a great way to remind them that we’re a base­­ball school,” Pastides explains. “‘Would you mind signing a baseball?’”

“For many people, just holding the baseball has a sentimental value,” Pastides says. “It’s something they haven’t done for many years, probably since they were a child. Bernard
Shaw, the famous correspondent, wrote, ‘Let us never lose the little boy moments.’ He
had one of those guttural, ‘This makes me feel like a kid again’ moments.”

How and where someone signs a baseball can also be telling, according to Pastides — and not everybody opts for the stretch of cowhide where the space narrows between the seams.

I thought it would be nice, as a reflection of the distinguished people who come here, to ask them to sign a ball rather than a piece of paper. What I immediately noticed was that they were happy to oblige.

“Some people know,” says Pastides. “Jeb Bush immediately knew where the sweet spot is. Condoleeza Rice, who is a great sports fan, signed it there. And Barack Obama — he did it perfectly. But some very powerful people turn it over in their hands and ask, ‘Where should I sign?’ I never tell them. I just say, ‘Wherever you wish.’ I feel like their personality will come through a little bit.”

While the display cases in Pastides’ office are filled mostly with balls signed by folks with zero connection to the diamond, there are exceptions, including one signed by former head baseball coach and current athletic director Ray Tanner and a handful of balls that predate Pastides’ time in office.

“A few of them are baseball players from my childhood,” Pastides explains. “Brooks Robinson, Warren Spahn, Tommy John. Don Larsen, who threw the only perfect game in World Series history. But I also like some of the non-baseball athletes. Alex English, the former Gamecock and NBA star. Jim Furyk, the golfer. He’d signed golf balls before but never a baseball.”

And then there’s Tony Romo. The former Dallas Cowboys quarterback and current NFL broadcaster made his reputation tossing the pigskin, but he’s also a baseball fan and wore the number 9 throughout his career because that was the number worn by fictional pitcher Roy Hobbs.

“He signed it, ‘Tony Romo, The Natural,’” says Pastides. “He said, ‘That’s my favorite baseball movie of all time.’”

Scholars on the ball

The arts have always been well represented on campus, as evidenced by the famous writers who come to USC every spring for the Open Book literary reading series and the marquee performers who take the stage at the Colonial Life Arena and the Koger Center. As a result, the collection contains autographs from novelists Pat Conroy, Martin Amis and Elmore Leonard, former poet laureate Billy Collins, and several members of the Allman Brothers Band and the Beach Boys, plus James Taylor, Chaka Khan and, of course, USC’s own Darius Rucker.

“I love the writers and musicians,” says Pastides. “In terms of favorites, Stevie Nicks is definitely one. When she learned that I’m a great fan of Fleetwood Mac, she was a little surprised — you know, university president, rock music — but she put ‘Love, Stevie’ and drew a heart on it. That was kind of a swoon moment for me.”

Down the middle of the plate

Bipartisanship may be on the decline in Washington, but it’s alive and well on the USC campus — and on full display in the collection.

There’s a Paul Ryan ball, but also a Hillary Clinton. There’s a Marco Rubio and a Mitt Romney, but also a George Mitchell and a Barney Frank. And when the university celebrated the opening of the Ernest F. Hollings Special Collections Library in July 2010, Democratic Rep. Jim Clyburn and Republican Sen. Lindsey Graham jotted their names on the same ball.

“Now, why I don’t have Senator Hollings and Joe Biden on a ball together, I don’t recall — because Biden was there as well,” says Pastides. “I do have a Biden ball, but it’s not with the senator.”

For a president who has made racial reconciliation a hallmark of his presidency — witness the dedication of the desegregation garden in 2013, the opening of the Center for Civil Rights History and Research in 2015 and the public acknowledgement in 2017 of slavery’s role in the construction of campus — hosting prominent civil rights leaders such as John Lewis and Andrew Young (and getting their signatures) comes with the territory.

“Another one I like very much is Cornel West,” says Pastides, holding up a ball signed by the philosopher, political activist and social critic following a talk on the legacy of Martin Luther King Jr. at the Russell House during MLK Week 2016. “It says, ‘To Bro' Harris, Cornel West.’”

When Supreme Court Justice Sonia Sotomayor was in town to receive an honorary degree in May 2011, getting an autograph from the first Latina justice to serve on the nation’s highest court seemed like a no brainer. It turned out to be a challenge.

“She was also a New York City kid, like me, and grew up loving baseball, but Supreme Court justices are not supposed to sign things,” says Pastides. “They worry that people will get money for it, and by extension could use their name to profit, so she turned me down at first.”

I also like some of the non-baseball athletes. Alex English, the former Gamecock and NBA star. Jim Furyk, the golfer. He’d signed golf balls before but never a baseball.

Pastides obviously respected the decision, but the next day, Sotomayor revisited the case and made an exception to her own rule — with one small caveat. “Toward the end of her visit, after dinner, she said to me, ‘Do you have that baseball around?’ I said I did, and she told me, ‘I’m going to sign it, but if I ever see that ball on eBay, I’m coming after you!’”

For a while that made the ball one of the rarest in the collection. With the legal precedent established by Sotomayor, however, other member of the bench stepped up to the plate as well.

“Since that time, I’ve got an Antonin Scalia and a Stephen Breyer and a Samuel Alito,” says Pastides. “They all came to campus after her, and none of them had a problem with it."

Get a Harris Pastides

In April, Carolinian magazine will be giving away a baseball autographed by university President Harris Pastides. For details, follow UofSC on Instagram and stay on top of the stories.