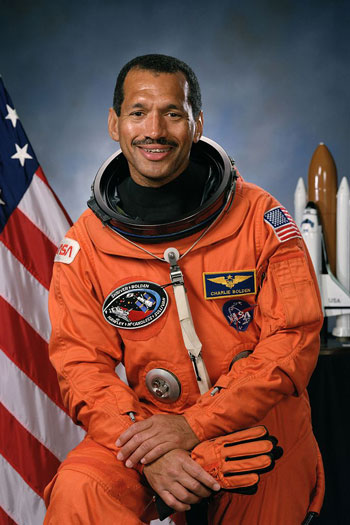 Charles Bolden Jr. joined NASA's Astronaut Office in 1980, traveling into orbit four times aboard the space shuttle as a commander and a pilot. He led NASA from 2009-2017.

The Charles F. Bolden Jr. Collection documents the career of the Columbia native and 1964 C.A. Johnson High School graduate whose distinguished military service and training led to his selection for the U.S. space program in 1980. He traveled into orbit four times aboard the space shuttle and later became the first African-American to lead NASA, serving from 2009–2017.

On Monday (May 14), Bolden talked about his collection, career and the future of space exploration with Midlands area high school students in the morning and guests at the university’s annual Thomas Cooper Society Dinner.

Bolden, who lives in Mount Vernon, Virginia, says his home is and always will be Columbia.

“That played a big part in my decision to place my collection at the University of South Carolina,” Bolden says. “The university honored Ron McNair and me in 1984 when we spoke at commencement and received honorary degrees. When my mother passed in 2002, South Caroliniana Library asked my brother, Warren, and me about making her work as an educator part of a permanent collection. I was incredibly impressed with how it was handled and how it has contributed to the growth of students. I’d like to think that my collection adds to her story and continues her work.”

Bolden’s mother, Ethel Martin Bolden, was an educator, school librarian and community leader who was at Waverly Elementary School and Perry Junior High School before teaching librarianship at Allen University and South Carolina State College in the 1960s. In 1968, she became the first African-American professional at Dreher High School, where she worked until her retirement in 1982.

“It’s an honor to steward not just Charles Bolden’s collection, but to have it join his mother’s collection we’ve held at the South Caroliniana Library for years,” says Tom McNally, dean of university libraries. “They’re both pioneers in many aspects and their collections together document many firsts for not just South Carolinians but also African Americans.” 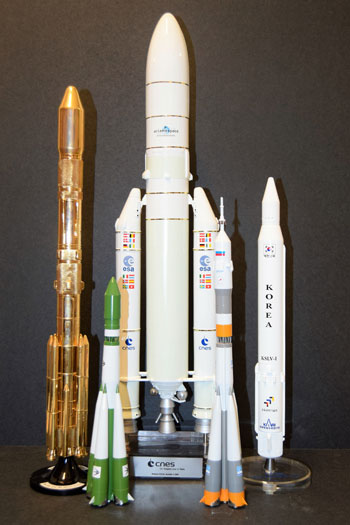 The Charles F. Bolden Jr. Collection includes many model rockets given to Bolden from foreign space programs. Included are ones from Russia, China, India, South Korea and the European Space Agency.

Charles Bolden’s collection features his papers, which include letters, speeches, schedules, notes and calendars that document his time as a student at the U.S. Naval Academy, the 100 missions he flew in the Vietnam War and his time at NASA.

Equally rich is the array of collected items that accompany the papers. There are the personal items he took into space — toothbrushes, soap and razors and cassette tapes of Patti LaBelle, The Mormon Tabernacle Choir, The Manhattan Transfer and Eric Clapton.

Other materials include his space shuttle repair manuals with his notations on how to repair tiles; an array of model rockets from foreign space programs, including ones gifted from Russia, India, China and South Korea; the hold-down bolts from the launch pad for the 1992 space shuttle mission; a solar array panel from the Hubble Space Telescope; aerial photos of Earth studies by astronauts to identify continents and countries; and one-of-a-kind framed pieces commemorating each NASA space flight mission.

“Gen. Bolden is a true role model for aiming high in establishing and accomplishing personal goals, so it’s a great honor and responsibility for University Libraries to receive his collection,” McNally says.

Plans call for the collection to be made widely available.

“Once we inventory and catalog all the items, which will take about a year, a portion of the collection will become a traveling exhibit,” he says. “We’ll share some of the unique items in the collection with schools, libraries and museums statewide so that students will have access to the amazing items it contains. It will inspire learners for generations to come.”

That process is underway, with curator Graham Duncan organizing the contents of the 40 boxes that comprise the collection.

“It’s a rich collection of information that is not just about Bolden’s career with NASA,” says Duncan. “It also documents his experience as an African-American at the U.S. Naval Academy and his time in the Marines and at war in Vietnam.”

As a child, Bolden’s dream was to earn an appointment to the U.S. Naval Academy and become a “frogman” (modern day Navy SEAL). He realized his dream of attending Annapolis — an accomplishment he credits to hard work, perseverance and the support of his parents — but the influence of his first academy company officer, Maj. John Riley Love, a young Marine Corps officer, led him to accept his commission in the Marine Corps instead of the Navy.

However, it was a conversation with South Carolina astronaut Ronald E. McNair, the second African-American to fly in space, that pushed Bolden to apply for the space program.

“I was a test pilot and he asked me about my interest in the space program. I said, ‘they never picked me’ to which he said, ‘that’s the dumbest thing I have ever heard.’ It embarrassed me because I knew you don’t get anything if you don’t ask for it. You have to go after it. I had applied persistently for test pilot school several times and made it into the space program the first time. I hope that inspires others.”

The two astronauts became good friends, with Bolden staying close to McNair’s family after his death in the 1985 Challenger accident.

“I hope this collection inspires students and people of all races, creeds and colors to look at my mom’s work and mine and see that there is no limit to what they can do in their lives if they take time to study and prepare and to take risks,” Bolden says.