No dream too big 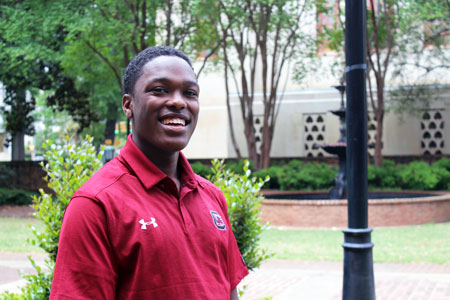 “It’s something that I have learned is really important to me — diversity — whether it’s in medicine, in government, or on campus." — Scott Salters

Scott Salters thought his dream of being a physician in his hometown of Greenville — helping folks and being a role model for other young black men — was too big a dream. So, he set about earning certification as a nursing assistant and getting his associate’s degree along with his high school diploma from Greer Middle College Charter High School.

Now after two years at the University of South Carolina, Salters graduates in May with leadership distinction, a long list of accomplishments and activities, and a degree in exercise science.

He also plans to attend medical school, starting in the fall of 2019.

“I was under the impression that it was too big of a thing, to be a doctor,” Salters says. “Now, it is a very real possibility.”

Salters credits Carolina and his involvement in an internship program at Greenville Health System, which is a partner with the UofSC School of Medicine Greenville.

His internships also provided him the basis he needed for the Graduate with Leadership Distinction program in professional and civic engagement.

“As part of my internship last summer at Greenville Hospital, I practiced medical school interviews. A lot of it was similar to what we were doing for the GLD — what’s important to you, what have you learned from specific situations,” he says. “And I can use it for med school, both as something that may help me get accepted and as a way to reflect on future learning experiences.”

During his time at Carolina, Salters served as a resident mentor, he was vice president and reactivated the MAPS — the Minority Association of Pre-health Students — chapter at Carolina, which strives to prepare and support multicultural students, who are interested in health care.

“It’s like passing the torch onto the next generation,” Salters says. “It’s something that I have learned is really important to me — diversity — whether it’s in medicine, in government, or on campus.

“Physicians, for example, need to represent the populations they serve.”

As a member of Student Government, Salters took on the task of spreading diversity awareness to other groups on campus, including conducting a privilege walk on campus to let people see how small differences in circumstances can have a large impact on people’s lives.

He says he hopes that when he reaches his ultimate goal of being an emergency medicine physician that he can be a role model for other young black men whose dreams may seem too big.

“I have role models in health care in my family, but I would be the first doctor,” he says. “I think that it is important for me to be at that level of medicine. Patients need to be able to relate to their physicians, because that relationship is built on intimate trust and compassion.”