A Horseshoe brick with his name on it

Beau Bergman is still several months shy of his first birthday, but he already has an indelible connection to Carolina. The little guy rocks a garnet-and-black sweatshirt and baseball cap, and he’s tailgated with some of the university’s most dedicated fans. 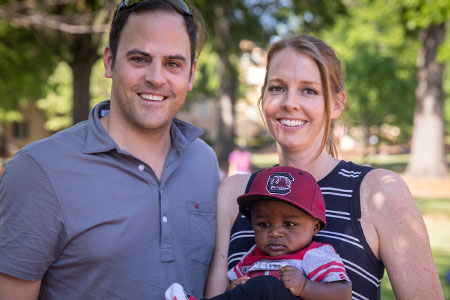 At the same time Sam and Catherine Bergman adopted Beau, the young family got "adopted" by a several Gamecock fans.

“We’ve told Beau he has two choices — he can either be a Gamecock or a Bobcat,” says his mom, Catherine, a partner in a construction management firm in Billings, Montana.

Wait, what? A Bobcat? That’s the mascot of Montana State University, where both Catherine and her husband, Sam, went to college. The Bergmans live in Billings and recently adopted Beau from South Carolina where a chance meeting in a hotel bar in Columbia sparked their Carolina connection.

“We had been with Beau at the hospital for several days after he was born, and we were staying at the Inn at Carolina,” says Sam, who works with his wife in construction management. “Some Carolina fans were in town for the Florida football game, and they spotted Catherine holding Beau in the hotel lobby.”

In an act of spontaneous Gamecock hospitality, the coterie of Carolina faithful welcomed the young couple into their pre-game festivities and began indoctrinating them into the ways of southern football fandom.

As the adoption paperwork dragged on and required their continued presence in Columbia, the Bergmans took to strolling on the Horseshoe with their baby son. By the next week — the week of Thanksgiving and the big Clemson game — they found themselves still away from home but in the midst of their newfound Carolina family.

The Bergmans saw their Carolina friends once more, the day before the Clemson game, then flew back to Montana with Beau — and many garnet-and-black memories — in tow.

“Johnny and I wanted to do something for them,” says Smith. “We came up with the idea of getting Beau a Horseshoe brick.”

The brick — inscribed “Beau Bergman, Forever to Thee” — means that Beau is already a Gamecock. Sadly, Johnny Fields passed away unexpectedly earlier this spring but not before Beau’s brick was installed. It’s a tribute to the kindness of strangers that enlarged the Carolina family.