A century of remembrance

A Veterans Day 5K race held Nov. 10 concluded its run at the University of South Carolina’s War Memorial Building where a memorial garden is being developed to honor students and alumni who died during World War I and the Mexican border dispute of the same era. 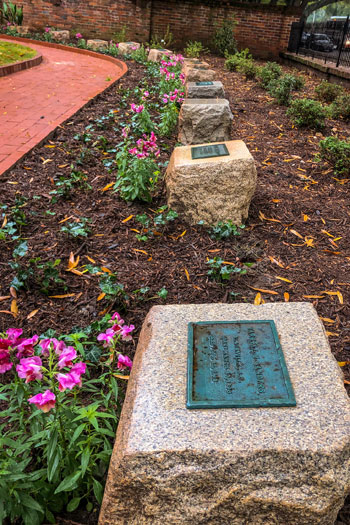 Thirteen of an original group of 28 markers honoring USC students and alumni who died during WWI and the Mexican border dispute have been relocated to the front lawn of the War Memorial Building. Fifteen more markers will be reproduced and installed later.

The university relocated a group of granite-and-bronze markers that memorialize the fallen, placing 13 markers on the front lawn of the War Memorial Building (Sumter at Pendleton). Plans call for installation of 15 more to replace markers that were lost decades ago.

“We’re working with a contractor to replicate the granite bases and bronze plaques,” says Emily Jones, USC’s landscape architect. “When it’s completed, there will be two rows of memorial markers in front of the War Memorial, with a curved brick sidewalk beside each grouping.”

The original markers were placed in 1927 by the S.C. Department of the American Legion Auxiliary, which also installed a large boulder and bronze plaque on Greene Street in front of Davis College that notes those fallen in WWI and the Mexican border dispute. The markers accompanied 28 elm trees, which the university planted as living memorials along Greene and Pickens. During the dedication of the elms, then-USC President William S. Currell eulogized those who “fell in the forefront of the hottest battle or were victims to slow and painful disease.” In 1922, the university placed near the front entrance of the South Caroliniana Library a large bronze plaque that names the 28 fallen servicemen.

The memorial trees eventually succumbed to Dutch elm disease, and many of the memorial markers were lost during mid-20thcentury construction on Gibbes Green. In their new location, the markers share the grounds of the War Memorial Building, constructed in 1935 as the state’s memorial to those who served in World War I. Five hundred thirty-one USC alumni and students served during the conflict, which ultimately involved more than 4.7 million U.S. men in women in military service.