Making music that makes a difference 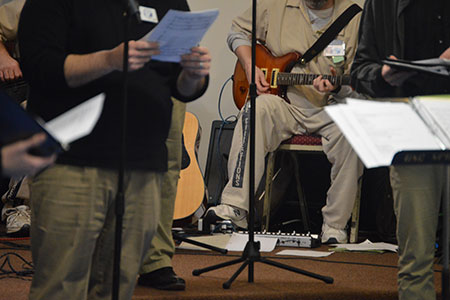 Lee Correctional Institution near Bishopville, S.C., is the state’s largest maximum-security prison and home to some of the most violent offenders. It’s also a place where music can make a difference.

Graduate students from the University of South Carolina’s School of Music, led by associate professor of music theory Danny Jenkins, are taking their "Rhythm and Meter" class behind bars, working with the prison’s music program to help participants better understand music theory.

Jenkins got his students involved in the project when he learned about the Music for Transformation program. Founded by Decoda, an ensemble in residence at Carnegie Hall, the program brings musicians to the Lee Correctional Institution each year for a weeklong residency.

“When Decoda came down and started talking to the inmates, they asked the music leaders what they needed,” says Jenkins. “They said they wanted to learn more about music theory. They wanted to understand how music works.”

At first, Jenkins donated textbooks to explain how songs are constructed and composed. But after attending a concert at the prison a few months later, he wanted to do more so he began teaching inmates music theory from the Columbia campus through teleconferencing. In the fall of 2018, he made the philanthropic project part of his graduate-level "Rhythm and Meter" class.

To be eligible for the program inmates must be part of the Character Based Unit, a dormitory established within the prison. Inmates apply to be part of the community and, once accepted, must maintain good behavior to stay and enjoy a range of classes taught by leaders from within the inmate population.

“It meant so much to me as a musician to witness how music communicates and connects with no boundaries.”

Caryn Ong, student in the graduate-level "Rhythm and Meter" class

“The leaders are inmates,” says Jenkins. “Every single thing they're doing, they have to do. They learn how to communicate in the music-making process. What they learn often leads to better communication in the other facets of their life.”

For students Caryn Ong and Jacob Wylie, the experience has been a unique form of education.

“It’s always a very good opportunity for me to teach to many different people no matter their age or social background,” Ong says.

“It's valuable to make music with people who might not be of what you would call the professional level,” Wylie says. “The music you make with them and the experience you have while you're making the music is of equal value.”

For Wylie, being involved with inmates has further opened his eyes to the power of music. “Music is truly the universal language. It’s helps people express things that are not able to be expressed in words or in any other sort of form of communication.”

The inmates and students aren’t the only ones who are learning. Since he began teaching his Lee County students, Jenkins has evolved in the way he teaches music theory to School of Music students.

“That process led me to make changes in how I teach my undergraduate and graduate classes. It led me to reconceive what I think music theory is, and what I think it’s supposed to be doing.”

As valuable as the program is for inmates, Jenkins believes the program is equally beneficial for students, too. “I wanted this to be in line with community-engaged pedagogy, which is not only about us coming out from the academy and solving people’s problems. It is about exchange,” he explains. “I want them to see that you can actually use your musical skills to make somebody’s life better and to actually interact with them.”

Student Taylor Gable has already taken that lesson to heart and become involved with Killingsworth, a Midlands residential program for women recovering from alcohol or drug abuse, incarceration, mental and emotional problems and other crisis situations. “The class is showing me what can I do in the community with music,” Gable says. “It’s helping me see where can I put music and where people want music so I can help them experience it.”

The group traveled to Lee County on Dec. 7, a gray, dreary day. It proved to be a stark contrast to what unfolded inside the prison walls when the students and inmates gathered to rehearse and perform their compositions.

The students, who had been looking forward to meeting their collaborators face to face since they began interacting early in the semester, were inspired by the effort, support and community they experienced inside one of the state’s most feared places.

“It was such a humbling experience that I will never forget,” student Ong says. “It meant so much to me as a musician to witness how music communicates and connects with no boundaries. I gained so much, and I am thankful for their music.”

“All of the prisoners, both those attending the concert and those performing, were very warm and welcoming,” adds Gable. “There was no tension; everyone was very supportive. That’s a side of Lee that no one sees. There is amazing rehabilitation occurring thanks to all of their community programs.”