Beck Chandler recently wrapped up what might have been the most interesting and challenging role thus far in his nascent career in community theater. 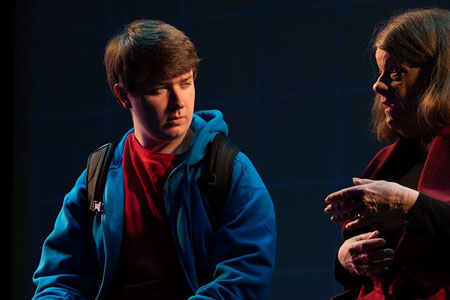 Freshman Beck Chandler played the main character in "The Curious Incident of the Dog in the Night-time," staged at Trustus Theater. Chandler found it "liberating" to bring his personal insights into autism to the character he was playing.

The University of South Carolina freshman played Christopher, the main character in “The Curious Incident of the Dog in the Night-time,” staged in early February at Trustus Theater in Columbia. The drama focuses on Christopher’s struggle to solve a minor mystery while coping with the personal limitations of his autism. Chandler, who enrolled at Carolina through the Gamecock Gateway program and who plans to major in computer science and music in the fall, is himself on the autism spectrum.

“I read the book before, and I’ve been interested in playing this role ever since,” says Chandler, who was diagnosed with autism at age 5 and spent nine years in weekly therapy sessions while attending a private mainstream school. Those therapy sessions exposed him to other children on the autism spectrum and helped inform his performance.

“I have been trying to act like I don’t have autism for the past 13 years,” he says. “Now, playing this role of someone with autism, I’m acting on stage like someone with autism. It’s sort of ironic, but it’s kind of liberating, actually.”

Chad Henderson, a 2007 Honors College graduate who minored in theater and directed the play at Trustus, says Chandler wasn’t picked for the role solely because of his firsthand experience with autism.

“He’s a talented performer any way you cut it,” Henderson says. “He’s done a lot of theater in his youth. This role is meant for him — audiences have had a deep connection because of his performance. He came out swinging.”

Theatre USC will stage the same play in April, but Chandler was out of town during those auditions. He’s looking forward to auditioning for future roles in Theater USC dramas, he says.

“I’ve really enjoyed everything about the Gamecock Gateway program so far,” he says. “I like Columbia and I really like USC.”