10 floors up and a mile away 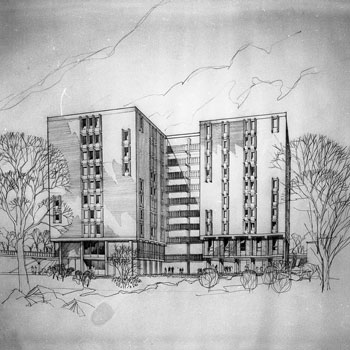 When Mel Wright came to the University of South Carolina in the fall of 1969, he had a choice: sign up for one of the older dormitories in the heart of campus — near Russell House, near the Horseshoe, near just about everything — or move into a 10-story high rise a mile down the road.

Despite the obvious drawbacks, Wright chose Option B. As in, Bates House.

“It was brand-spanking new,” says Wright, whose room on the 10th floor looked out over Wheeler Hill. “The downside was that it was off campus, for all intents and purposes, but it was absolutely beautiful. The rooms, the study carrels at the end of the hall — it was just a great design. And the cafeteria was excellent. It was a downright sin how much we ate.”

What Wright remembers best, though, was the community, which served as the Florence, S.C., native’s introduction to the late ’60s counterculture. He never really strayed from his conservative roots — after graduating with a degree in English in 1973, he attended seminary, then spent 15 years as a Presby­terian minister before entering finance — but living among “the resident hippie community” opened his eyes to a world of other perspectives.

“There were the traditional Southern guys like me, but there were also the Northern guys, a lot of guys from New Jersey, who seemed to be ahead of us with the long hair, the clothes — even their music was different,” he says. “They were great guys, but they were something else. I came up to Columbia with my khaki pants and my ironed white Gant shirts and penny loafers, and I was soon overwhelmed by blue jeans and tie-dye.”

He was also caught in a changing tide when it came to social issues. When he was elected president of Bates House his first semester, he drew support from across the spectrum, even if some of his positions ran counter to the prevailing libertine spirit.

“Back in 1969, there was no such thing as co-ed dorms, we didn’t even have open houses,” he explains. “But as president of Bates House, I sat in on a meeting with the board of trustees to discuss changing the visitation rules, and I took a strong stand against it. Of course, by the time I was a senior, I was living in Preston and there were guys on my hall who had girls practically living with them. It was a tumultuous time.”

Wright also had a front-row seat for the protest movement, albeit accidentally. In the spring of 1970, when riots erupted on campus following the bombing of Cambodia and the Kent State massacre, Wright’s English professor was arrested at a sit-in and asked Wright to testify on his behalf before the board.

“The day the riots really kicked in, we’re sitting in Osborne, waiting to be examined by the board of trustees, when a group of students broke down the doors and took over the building,” he says. “Shortly thereafter, back at Bates House, SLED agents started showing up, knocking on people’s doors to arrest them. Thankfully, they realized I wasn't one of the people throwing papers and computer cards out the windows!”

Fifty years later, Wright can see his first dorm on the horizon from his office on the 16th floor of the Bank of America Financial Center on Gervais Street. Freshman year feels a lifetime away, but the memories are just down the street.

“We were kind of in our own little world over there because we were so isolated geographically,” he says. “But at the end of the day, Bates House was a melting pot, with a lot of different perspectives, and that’s really what college is about.”