A president joins the Class of 2019

Harris Pastides reflects on his final commencement as university president

During his 11 years as president of the University of South Carolina, Harris Pastides has participated in more than 100 commencement ceremonies across the university system, delivering remarks, career advice and wise counsel to more than 100,000 graduates. 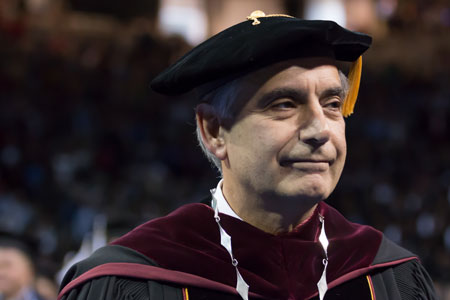 More than one-third of the University of South Carolina's alumni have graduated during Harris Pastides' 11-year tenure as the 28th president of the institution.

This week, he and first lady Patricia Moore-Pastides make their final round of commencement events, with the president serving as the main speaker at each campus. It’s a bittersweet moment for Pastides, who — with retirement looming on July 31 — considers himself and his wife honorary members of the Class of 2019. We asked Pastides to share his thoughts on his final commencement as president, what he plans to share with students and his and Patricia’s plans for retirement.

What’s it been like to draft the last commencement remarks you’ll deliver as president of the university?

This commencement address has been one of the hardest things I’ve had to write in my presidency. I see this as my graduation as well. I went back and looked at all of my commencement addresses to date where I’ve talked about the history and impact of USC, civil discourse, the Carolinian Creed, the importance of teamwork and leadership and many other topics, from resilience and personal happiness to great people such as Roger Bannister,  the Wright Brothers and Martin Luther King. But for my final commencement address, I’ve chosen the theme of moving on.

That sounds appropriate — the new graduates are moving on and so are you.

I’m finding moving on difficult and complicated so I did some research on what psychologists have to say about it. Most of what you find has to do with moving on after a breakup or divorce, but there’s very little about moving on from something you love. So I looked at what songwriters and poets have said and came across lyrics that one country songwriter penned, something to the effect of, “You broke my heart so I tore up your picture.” Again, not appropriate to our situation, but I’m going to need a little comedy in what otherwise might be a very serious talk. In the end, I’ve come up with a metaphor for moving on from USC that I think is new and different. It’s not about closing one door and opening another, or turning a page, but I’m not going to share it until commencement — you’ll have to wait!

This commencement address has been one of the hardest things I’ve had to write in my presidency. I see this as my graduation as well.

In retrospect, have the past 11 years gone by quickly?

Patricia always says the time flew by like the wink of an eye, but some of the days were the longest in our lives. It’s very true. When people ask us, “Why would you leave?” or “How can you leave?”, we tell them that we don’t feel anything other than thankful — and satisfied. Would it be nice to have a 12thyear and a 13thyear? Yes, but to leave now is like getting up from a good meal where you’re not stuffed but satisfied, and you’re looking forward to doing something new. So we’re still going to have a new chapter of our lives without feeling stuffed or tired.

We’ll be doing a lot of travel over the next year, and then we’ll reconnect with the university. I feel like I’ve been juggling 13 balls every day, so in retirement I’m going to start dropping one at a time, but not all of them. The two most important are family and community service. We’ve decided not to sign up for anything right away on the latter, but Patricia has a deep commitment to things like literacy and healthy eating, and I am very interested in service to higher education and, of course, public health. I’ll be finding new ways to serve the university, perhaps working more individually with students and faculty who would like some advice or mentorship. I certainly would not do anything without the request of the board and the university’s new leader, but I’ll be around, I’ll have an office on campus.