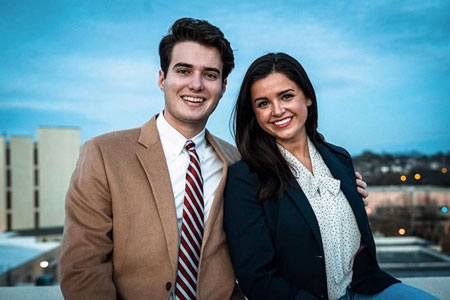 Luke Rankin and Kate Lewis ran joint campaigns — he for student body president, she for treasurer.

Talking to Luke Rankin, our newly installed student body president, you would think that he was born to be a politician. He’s friendly, charming and inspiring. When he speaks there’s at least one motivational phrase in each sentence, which is exactly what people love to hear when they’re trying to be convinced they can do something or that their community can be better.

He seems like a natural born leader, like it was his plan to be student body president all along, but nothing could be further from the truth.

“If you had told me freshman year that I’d be doing all of this, I would’ve laughed,” Rankin says.

At the beginning of his college career, Rankin planned to study abroad in Florence, Italy, during the spring semester of his junior year. Instead, he found himself running to be student body president that semester. But, he did get an early start.

Three days after he moved into Columbia Hall as a freshman, Rankin was elected president of the residence hall. He was in the cabinets of two different student body presidents and held leadership positions in Greek Life. He also was a member of two different honors societies at UofSC.

“I am someone who no matter where I am, no matter what community I’m a part of, I want to be involved. I want to be an active participant,” Rankin says. “And not just like civic duty and engagement, I’m a people person, I love connecting with people.”

Becoming a part of all these different aspects of campus gave him the opportunity to get to know a wide variety of the student body and learn about their concerns and needs. Which, he says, just sort of naturally led to running for student body president.

“It was just kind of a culmination of everything I’d been a part of and leading to a point of, ‘You know what? I’m going to go for it. Why not?’ ”

“It is the greatest honor of my life to be able to say that I am the student body president of the University of South Carolina and that I get to represent 36,000 students and advocate for their needs.”

He ran a joint campaign with Kate Lewis, whom he had been friends with since freshman year and who was running for treasurer.

“It was just kind of natural, organic, real and authentic as ‘I’m not going to do this because I could, I’m going to do it because my heart’s in it,’ ” Rankin says.

He had a 300-person campaign staff helping him well into the early hours of the morning with the arduous campaign that included a run-off. He talked to student organizations, working late into the night reaching out to students from underrepresented groups.

“I let them know that there are people at this university who want to advocate for them,” Rankin says.

His first few months have been a bit tumultuous as the university is undergoing its own leadership transition with the retirement of President Harris Pastides. Rankin says he has been been meeting with USC Upstate Chancellor Brendan Kelly, who will serve as interim president of South Carolina while the board finds a permanent replacement for Pastides.

He also is working to help welcome the next crop of freshmen — the class of 2023.

“It is the greatest honor of my life to be able to say that I am the student body president of the University of South Carolina and that I get to represent 36,000 students and advocate for their needs.”