The art of ‘Factfulness’ and a new perspective 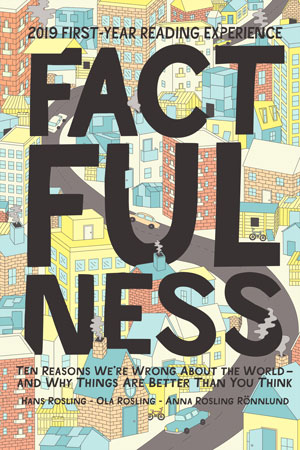 Imagine illustrating a book that espouses changing your worldview of rich and poor to increase optimism. That was the challenge for senior-level graphic design students, participating in a contest to design a new cover for this year’s First-Year Reading Experience selection.

The winning design by Maggie Behling captured the essence of the book Factfulness: Ten Reasons We’re Wrong About the World—and Why Things are Better Than You Think by Hans Rosling, Ola Rosling and Anna Rosling Rönnlund.

“My design is a cityscape that’s made up of different levels of housing: So there’s big apartment buildings among tiny shacks and everything in between,” says Behling.

Behling’s design was largely influenced by the authors’ notion that people tend to perceive a substantial divide between the developed and undeveloped world. Instead of polarizing countries into two categories, the authors propose a framework of four income levels to categorize the world.

“With this in mind, I illustrated many different houses from different income levels, intertwined to form one whole community,” says Behling. “This is supposed to be representative of the world. Though it is full of all sorts of people with varying living conditions, we all exist on this planet together.”

Behling, a May 2019 graduate from Florence, South Carolina, says she wasn’t expecting to win the annual contest, but one judge says her work stood out from the beginning. 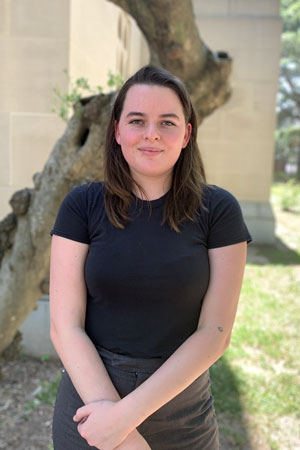 Maggie Behling graduated in May with a bachelor’s of fine arts degree in studio art with a concentration in graphic design.

“Early on in the process, her visual interpretation of the book stood apart to me,” says Michael Belton, a designer at the UofSC Office of Communications and Public Affairs who won the contest as a student in 2016 and was a judge for this year’s contest. “There was apparent detail and thoughtfulness in every decision she made, from the colors to the composition.”

The annual design contest isn’t a new addition to the First-Year Reading Experience.

“The partnership with the department of visual art and design has been a part of the First-Year Reading Experience for over 20 years and continues to be such a special aspect the program,” says associate director of University 101 Programs and director of the First-Year Reading Experience, Catherine Greene. “The students are incredibly talented, and seeing the book come to life through their eyes is truly special.”

After graduating with a bachelor’s of fine arts degree in studio art with a concentration in graphic design, Behling began work as a part-time graphic designer in the university’s Office of Annual Giving, where she had been an intern during her senior year.

Factfulness explores the instincts we have that distort our perspectives, causing us to believe the world is in a worse state than it actually is. The book’s authors encourage readers to form their opinions based on facts. The book aims to change the way people see the world in order to better assess real dangers instead of perceived ones as humanity responds to opportunities and crises in the future.

“The book fact-checks these mindsets we have that are outdated and have changed over time,” says Behling. “I think it will be appealing to freshmen, because of how reassuring the book is, especially to a bunch of kids who are stepping outside of their hometowns and parents’ houses for the first time.”