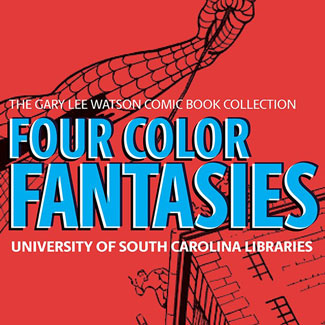 We recently asked her these three questions.

How did you go from comics fan to comics guru?

I’ve been a fan since my dad gave me a dime to buy my first comic book — Mystery in Space #32 — which I still have.

In the summer of ’67, I was a 19-year-old journalist in Santa Fe during a slow news time. So I decided to travel around the country and meet all the people in the comics industry. My dad thought it was too dangerous for me to drive, so he bought me a $99 Greyhound pass. I went all over the country and met some really unusual people — collectors, dealers and famous writers and artists.

I met a guy who asked me to help run a comics convention he was planning for the summer of ’69 in New York. The convention was two weeks before my road trip to see the Apollo 11 launch. So I drove to New York, helped run the first big comics show, drove to Florida, camped out on the Indian River and watched the launch with some friends of mine. It was just amazing — we were all crying and cheering when it took off. The ’60s were a tough time for America — we were so divided — but that summer changed my life.

How’d you get into the retail side of comics?

In ’68 my friend Bud Plant and I opened the first full-fledged comic book store in America — Seven Sons Comic Shop. It was basically a hole in the wall near a flower shop in downtown San Jose, but it was nothing but comics. Prior to that, comics were sold in second-hand bookstores. A guy in San Francisco opened a shop in that year, but we beat him by a month — and his was more of a head shop anyway.

All we sold was used comics. We tried to get new ones to sell, but the local magazine people just laughed us out of their stores. We didn’t realize at the time that the magazine distribution industry, which included comics, was like the Mafia.

Bud was the business genius. He founded two more stores while he was in college and founded the first comic-book store chain, creating a distribution channel through comic-book stores. Today every sizeable city in the country has a shop.

Why do comics matter today?

Comics matter because they reflect American culture. For example, the romance comics that were so popular from the ’40s through the ’70s give us a 30-year snapshot of social mores, fashion, dating practices — and the advice columns are hysterical.

Today’s comics are brilliantly written. They take on the world. In many cases they’re very dark and reflect racism, sexism, gender phobias, Islamophobia, and take on issues of ethnicity, poverty and hatred.

I’m not too sure the pamphlet comic as we know it will have staying power. Graphic novels may be the future of comics — you can tell incredible stories in far more pages. You name the event in the 20th or 21st century and there’s a graphic novel about it. Comics — all genres — are just an amazing resource for study.