As the University of South Carolina’s 29th president, Bob Caslen draws on personal experience, emphasizes character, builds relationships and looks to the future.

Robert L. Caslen has a lot of medals on his chest. The former superintendent of West Point, which is also his alma mater, served 43 years in the United States Army and retired as a lieutenant general. He did tours in Iraq and Afghanistan, and he was at the Pentagon on 9/11. Now, as the 29th president of the University of South Carolina, he’s ready to lead the state’s flagship public university into a new era.

But Bob Caslen — at his first press conference as president he asked people to use the more familiar moniker — doesn’t dwell on his career in the Army. His military service is a central part of his character, no question, but asked for examples of his own personal development, he is as likely to point to the gridiron as he is to the battlefield.

“Interestingly enough, it was football that taught me a lot,” he says. “I played offensive line, the starting center, on the freshman team at West Point, and I was the smallest and lightest on both sides of the ball. So I had to compensate with technique and speed and mental and physical toughness.”

He had been captain of the football team at North Country Union High School in rural Vermont — and president of the student body — and he was recruited by other colleges. But football at West Point was famously competitive, and going into his sophomore season he was told he likely didn’t have a future on the varsity team. As it turned out, he not only made the team but became a starter his junior and senior years.

“It was a life lesson on perseverance, tenacity, grit and toughness, playing to levels you didn’t think you were capable of,” he says. “There are so many other life lessons I gleaned from that time — how you perform in adversity, how you work your way through it.”

Caslen graduated from West Point in 1975 and entered the military as a commissioned second lieutenant, part of a new officer corps tasked with helping to rebuild the Army following the end of the war in Vietnam. His plan, though, was to fulfill his five-year obligation and then pursue a career in coaching — until a brief stint in the athletics department back at West Point changed his thinking.

After seeing the head coach get fired, he began to wonder if he had chosen the right path. A coach’s job is always in jeopardy, he reasoned, and while he loved being part of the team, working toward a common goal, he also wanted to provide stability for his family. It wasn’t long before he transferred back into the infantry, which drew from the same well and provided many of the same rewards.

“The camaraderie you felt at West Point and on the football team was the same camaraderie that you felt among the men in the infantry,” he says. “I wanted to be on the tip of the spear, so I went with the Airborne Rangers, but I never anticipated staying in for 43 years.”

Four decades is a long career in any profession, and the military can be particularly taxing. But Caslen thrives on hard work, and he draws particular satisfaction as a sort of player-coach, someone willing to roll up his own sleeves to help get the job done — and to lead by example. 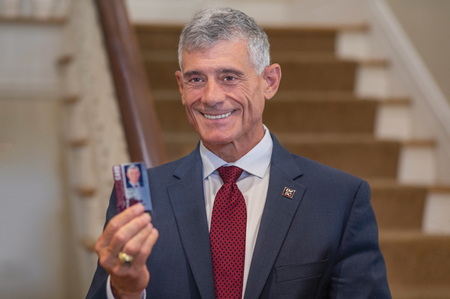 “I saw it when he was a company commander and in charge of the motor pool,” says Shelly Caslen, his wife of 42 years. She met Caslen when she was working in West Point’s football office and he was a center on the football team. “If his people were working, he was working. He would put on coveralls and get under the vehicles, and the soldiers wouldn’t even know he was the commander until they started talking to him.”

As the years racked up, he rose in rank and took on ever-increasing responsibilities. But no matter what military title he was addressed by, Shelly says, out of uniform he was always just “Dad.”

“He would come home, move the furniture out of the way and tell our three boys, ‘OK, who can take me down?’ And they’d wrestle and carry on for hours,” she says. “I’ve had people say to me, ‘What is he like at home?’ — because he looks so stern. And I say, ‘He’s a softie.’

“He wasn’t afraid to cry in front of our boys, and it was OK for the boys to cry, too. A lot of people were shocked by that. Later on, when they were grown, he never said, ‘You have to go in the military or go to West Point.’ Whatever they chose, he was behind them 100 percent — and he still is.”

The same commitment extends beyond the Caslen household. Shelly remembers a female cadet calling the house one evening during his first administrative stint at West Point.

“She said, ‘I don’t want to talk to him as a commandant. I’m having a hard time, I need some advice, I need a dad. Can I talk to him as a dad off the record?’” Shelly recalls. “He got on the phone, took his commandant’s hat off, put his dad hat on and helped her through the problem. He was always there for those kids.”

Just as he was there for his cadets during his five years as superintendent at West Point (2013-18) — and for his soldiers as their commanding officer — Caslen aims to be there for the students of the University of South Carolina as their president. “I want you to know that you are the reason I am here,” he told the incoming freshman class at Convocation in August. It’s a sentiment he has repeated several times since.

And when he talks about “being there” for students, he is speaking literally, whether that means hosting ice cream socials anytime South Carolina beats archrival Clemson in head-to-head competition, or inviting students to join him during his grueling morning CrossFit sessions that, in the course of an hour, work up a sweat and cultivate a sense of camaraderie.

“I came here with no preconceived notions,” Caslen says. “I plan to listen — that’s what good leaders do; they listen and they are lifelong learners.”

I believe in shared governance, from the bottom up, so that when it comes time to make a decision, everybody is on board.

Which is precisely what Caslen is doing: listening to the concerns not just of students but of faculty, staff, alumni and other members of the extended Gamecock family. And while he has only been on campus a short time, he has already staked out several of the biggest challenges facing the university.

“I want to address access, affordability and eligibility,” he says. “And I want to address the issues of diversity. We are one of the best universities in America for retaining and graduating minority students, but our enrollment on the flagship campus is 8 (percent) or 9 percent African American in a state that is 26 percent African American. That, to me, is concerning.”

On another front, Caslen is committed to advancing the Campus Village project and creating a new medical and health sciences campus. The Campus Village plan involves replacing the aging Bates, Bates West and Cliff Apartments with new residence halls on the south side of campus. The new medical school/health sciences complex is slated for a location near the Prisma Health Richland hospital campus and is intended to consolidate the university’s robust health science disciplines in one location.

He also wants to expand the university’s research programs and, on a related note, pursue membership in the Association of American Universities, the nation’s most prestigious group of research universities.

“I’ve told the faculty, ‘I’m going to be your biggest advocate.’ Hopefully, what they’ve seen so far debunks whatever concerns they might have thought about my being a command-and-control kind of guy,” he says. “I believe in shared governance, from the bottom up, so that when it comes time to make a decision, everybody is on board.”

Whether Caslen is talking about his college football career or his military career, his family or his presidency, the common denominator is character. In fact, he has co-authored a book on the topic, The Character Edge: Winning the Right Way (St. Martin’s Press), which is set to be published in 2020.

“Character is important to me because I come from a culture defined by character and the values of duty, honor and country,” he says. “When you’re in the midst of adversity, your character is defined and refined.”

And building character is an ongoing exercise, much like his intense daily CrossFit workouts, which he has invited students to take part in. He cites the Carolinian Creed, crafted in the 1990s by the university’s student body, as an example to build on — starting at the top.

“You can be the president of the No. 1 university in America, but if you’re a president of no character, then you’re a failed president. You can be No. 1 in your class, but if you fail in character, you fail in leadership,” he says. “So building character is one of the most important things we have to do here. To do that, we have to identify our values, communicate those values and live by those values, and demonstrate them and hold ourselves accountable to them.”

Coin of the realm

One of Caslen’s first initiatives at the university was to invite students to work out with him twice a week in an hourlong CrossFit regimen.

This is a serious workout, with dumbbells, kettle­bells, push-ups, pull-ups, burpees and, did we mention sweat? The goal is to build strength, get fit and build community — but with maximal energy output and minimal jawboning.

“He’s a man of few words, but President Caslen leads,” says Hannah Massur, a junior majoring in international business and global supply chain operations and management. 'You might say, ‘Hey, I don’t know how to do this.' And instead of trying to explain it, he’ll say ‘Let me show you.’ ”

Massur was one of about 20 students who showed up at 6 a.m. on a September morning at the Strom Thurmond Wellness and Fitness Center to work out with Caslen. Students who complete 10 workouts with the president over the course of the semester earn a special coin that features the university seal on one side and a star-spangled “block C” logo on the other.

Caslen also plans to give the coins to students and faculty for excellence in research, academics and athletics.

“He’s putting it into action by inviting us here and encouraging us. I think it’s exactly what our school needs.”