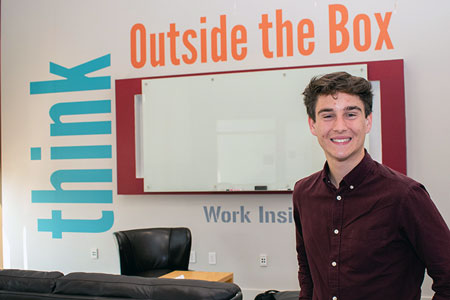 While earning his bachelor of science degree in computer science, Irmo, S.C., native Kevin Gagnon, also participated in several research projects, including one that let him use his computing skills to help a historically black community near the university tell its story.

The first-generation college student is a member of the South Carolina Honors College and is one of two graduating seniors to receive the university's highest undergraduate honor, the Algernon Sydney Sullivan Award, given each year for outstanding achievements, campus leadership, exemplary character and service to the community. The award is named for the 19th-century New York lawyer and philanthropist.

“Coming into USC, research was not something that I expected to be involved in,” Gagnon says in his award nomination essay. “However, with the guidance of some amazing professors and research-heavy honors classes, I realized that it was not only something I could achieve but also something that I could excel at.”

Gagnon helped build a mobile application for the Ward One community of Columbia to share its story of oppression. The project also helped connect the neighborhood to the university.

In addition to serving as a College of Engineering and Computing peer mentor, Gagnon also worked on projects looking at subjects as varied as neural network architectures and the detection of altered mental status in emergency department clinical notes.

“My work has also led to several publications in many different subject areas, each referencing my education at USC,” Gagnon says.

Last year, he teamed up with a biology student and others to develop a stroke identification application that won the 2019 Siemens Healthineers Innovation Think Tank’s annual external exhibition in Germany.

Gagnon’s non-academic interests focused on broadcasting: He worked at the student-run campus radio station WUSC for all of his four years here, serving two years as news director. He also was a producer and host of the On Campus podcast.

He also was a creator and curator of the Mobile Museum Exhibit for the university’s Museum of Education.

“I am grateful to USC for the opportunities it has afforded me, and I hope to continue to give back in every way that I can.”