Sport, entertainment management graduate breaks into NFL as scout coordinator for the Falcons

Kjahna O knew from the time she was a young girl, growing up in Southern California, that she wanted to be involved in football. She enjoyed watching games and played quarterback in flag football throughout her early school years.

But she hit a ceiling when she got to high school.

That obstacle only served to hone O’s love and desire to be involved in football, so she set her sights on the NFL.

“That’s the highest level you can go in football,” she says. “Go big or go home.”

After earning her master’s degree in the sport and entertainment management program at the University of South Carolina, O earned a spot with the Atlanta Falcons, helping that team find the best college players to round out its roster each year.

You’re like a Swiss army knife there. It’s all hands on deck all the time.

“I am certainly not the first woman to work in the NFL,” O says, noting that one of her colleagues in the Falcons’ scouting operations is a woman.

But, she says, being the granddaughter of Korean immigrants makes her stand out a little, as well as being a woman.

“How many Asians do you see in football?” she says. “I didn’t have anyone who looked like me in the NFL growing up, so I hope that one day, there’s a little Asian girl or boy who sees me and says ‘I want to be like KJ, she’s my role model.’ ”

O, who was a scholarship swimmer and earned her undergraduate degree at Chowan University in North Carolina, credits her time in the highly ranked program — part of the College of Hospitality, Retail and Sport Management — with helping her gain the skills and create the network to jump-start her football career. 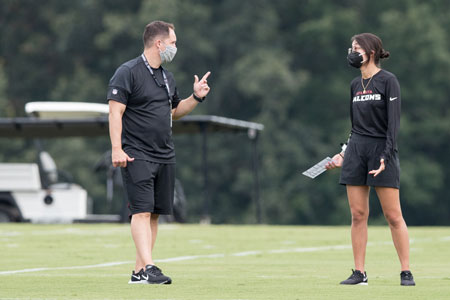 Kjahna O works for the Atlanta Falcons in the team's scouting operations.

“When I was little growing up in California, the University of Southern California was my dream school,” O says. “It wasn’t until I went to South Carolina that I said I was talking about the wrong USC the whole time.”

She chose the South Carolina program in part because of its reputation, but also because of its faculty, including NFL executives Tom Regan, who worked for the Denver Broncos, and Danny Morrison, former president of the Carolina Panthers, and former NBA executive Susan O’Malley, who was the first female president in the league when she took the top job with the Washington Bullets, now the Wizards.

“Obviously as a woman, learning from her was awesome, just having a mentor, role-model to look up to,” O says. “But everyone in the sport and entertainment management program was just so amazing.”

One of O’s first moves after arriving at South Carolina was to find work in the Gamecock football operations center, working with high school prospects.

“That was the start of my career,” she says. “What I did there is similar to what I am doing now, cutting up film of high school prospects, making sure the coaches see a snapshot of these players — their athletic ability, can they catch, what are they like running?”

O says she also helped out with recruits at home games and with a lot of gameday operations.

“I was doing a lot of everything,” she says of her experiences with Gamecock athletics. “You’re like a Swiss army knife there. It’s all hands on deck all the time.”

O says she hopes to stay on the “football side” of the business and would one day like to be director of college scouting for an NFL team.

Banner image: Kjahna O (middle row, fourth from the left) worked in football operations for the Gamecocks while she earned her master's degree in sport and entertainment management.