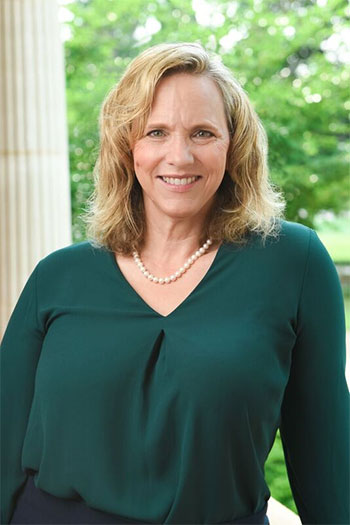 Monica Delisa, the new Vice President for Development, is set to begin work in her new role on January 4, 2021.

The University of South Carolina has named Monica Delisa as its new Vice President for Development. Delisa’s appointment was approved at the university’s Board of Trustees meeting on Oct. 9.

“We are delighted to welcome an advancement professional of such high caliber to the University of South Carolina,” President Bob Caslen said. “Monica has demonstrated an extensive track record of success and will be a great champion for advancing the university’s strategic priorities through her leadership of our Development team.”

Delisa comes to UofSC from Georgia College in Milledgeville, Georgia, where she has been Vice President for University Advancement since 2014. During that time, giving to Georgia College has more than doubled and the endowment has risen 31 percent. Under her leadership, the university’s $30 million campaign was successfully completed six months ahead of schedule. Delisa has also held the post of Executive Director of the Georgia College & State University Foundation, a separate 501c3 organization with a $46 million endowment.

Prior to leading University Advancement at Georgia College, Delisa was Assistant Vice President at Texas A&M Foundation, where the endowment in her units of responsibility increased by 20 percent during her tenure.

“This is an exciting time to join the Gamecock family, with so much energy focused on the vision for this university’s future,” Delisa said. “I’m looking forward to engaging with our alumni, supporters and leadership to transform our collective passion for the University of South Carolina into new levels of excellence.”

Delisa is working to complete her doctorate in education from City University in Seattle, with a concentration in higher education leadership. She also holds a M.A. in journalism and a B.S. in agricultural communications from the University of Arizona. Delisa and her husband, Vince, have three adult children and two grandchildren.

As Vice President for Development at UofSC, Delisa will provide strategic oversight and management of the university’s comprehensive development efforts and priorities, including the next capital campaign. The position was previously held by Jancy Houck, who retired in 2019, and has been filled on an interim basis by Will Elliott.

I’m looking forward to engaging with our alumni, supporters and leadership to transform our collective passion for the University of South Carolina into new levels of excellence.

Reporting to the university president, the Vice President for Development is the chief development officer for UofSC’s flagship research campus in Columbia, as well as Palmetto College, which comprises two-year institutions in Lancaster, Salkehatchie, Sumter and Union and an online degree-completion program. The Vice President for Development also has a coordinating role with the chancellors, deans and development offices at UofSC’s four-year institutions in Aiken, Beaufort and Spartanburg.