It’s not surprising that Antony Blinken, the newly installed U.S. Secretary of State, fielded questions about Venezuela in his first confirmation hearing in the Senate.

Led by a corrupt and discredited president, the country has spiraled into political chaos, and its support of anti-democratic movements in other countries and collaboration with Russia, China and Cuba threaten regional and global stability. More than six million Venezuelans have fled the country, and Nicolás Maduro’s regime there is considered a clear and present danger to the United States.

Fortunately for Blinken, the State Department already has a steady hand on the ground — Jimmy Story, a career diplomat who was confirmed as ambassador to Venezuela this past November. Story, who graduated from the University of South Carolina’s Honors College in 1992, has served in the State Department since 1998 in postings that include Afghanistan, Brazil, Mozambique, Colombia and Mexico. 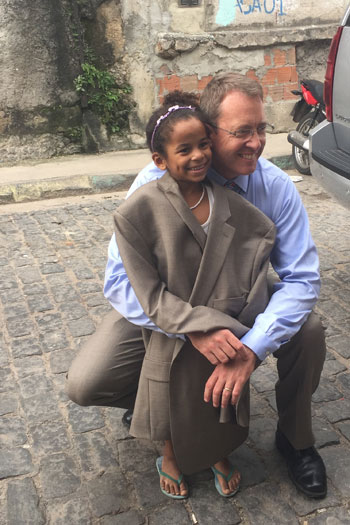 Jimmy Story, a native of Moncks Corner, S.C., has been posted around the world in his 23 years in the State Department but has spent the bulk of his carreer in Latin America. In Brazil, he met Natalia, a young girl who lives in a slum neighborhood and who ran to greet him every time he visited a State Department-sponsored program offering English classes there. Story is now the ambassador to Venezuela.

A recipient of multiple State Department awards, Story brings a pragmatic approach to his work as the Venezuelan ambassador.

“I think that strategic patience is key,” Story says. “I believe that 2021 is a key year for us to reinvigorate our diplomatic outreach while at the same time we continue to support the Venezuelan people. We have tremendous leverage in Venezuela through sanctions policy, and the question now becomes how to use that in the best possible way to to drive the outcomes that we seek — free, fair, verifiable elections.”

Story acknowledges that such an outcome will happen neither easily nor swiftly. “But the strength of dictatorships always appears to be complete until they fall,” he says. “And history is rife with those lessons.”

Story’s traces a direct line between his career with the State Department and his education in the Honors College. “I was offered a Navy ROTC scholarship at Duke, but I chose Carolina because I felt like the people of South Carolina put faith in me as a Carolina Scholar and I wanted to stay in South Carolina,” he says. “I took advantage of everything that was at the university and had great professors and mentors, including [Richard] “Dixie” Walker, who had been the ambassador to South Korea in the Reagan administration.”

Story did a study abroad semester in Puerto Rico where he cultivated his Spanish-speaking skills and spent a summer in eastern Europe. A Rotary Fellowship took him to Costa Rica for a year, where he solidified his Spanish, and after earning a master’s in foreign service from Georgetown University, he passed the foreign service exam.

“One of the things I tell young foreign service officers is that everybody in the service is smart. But if you show up and you work hard, you get 50 percent of it. If you're nice to other people, you get about 40 to 45 percent more and the last five to 10 percent is your relative brilliance,” Story says.

“I think the same kind of applies to being a university student. You show up and by that I mean you put yourself out there and you sign up for things. If you want to join the foreign service, do study abroad, travel, learn another language, apply for a Boren Scholarship. You never know if you can win the game if you don’t play — so get engaged.”

Story has returned to his alma mater and to historically black colleges and universities in South Carolina to speak to students about his career and he has mentored students here and across the country. One of them is now on his team in Bogota, Colombia.

“We want to see the foreign service continue to attract bright people who want to represent the United States, who want to look for solutions in an increasingly complex world. And I know that students at Carolina can do that.”