In the spring semester of 1974, streaking became the latest fad to hit college campuses, and for about one week, the University of South Carolina held the record for the largest number of streakers — 508. Here are the bare facts of the event. 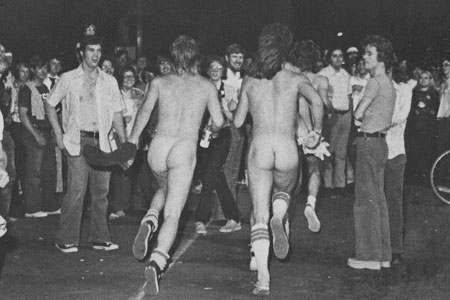 The spectator-to-streaker ratio was about 10:1 when 508 streaking students were gawked at by about 5,000 onlookers in March 1974.

“Oh, yes, they call him the Streak,
Fastest thing on two feet.
He's just as proud as he can be
Of his anatomy —
He gonna give us a peek…

A crazy fad popped up on college campuses about 50 years ago. It wasn’t goldfish swallowing or seeing how how many people could cram into a phonebooth. Those were fads from the 1940s and ‘50s.

"Oh, yes, they call him the Streak
He likes to turn the other cheek”
He's always makin' the news
Wearin' just his tennis shoes
Guess you could call him unique.

I’m Chris Horn and this is Remembering the Days. The fad of streaking started on college campuses in the late 1960s and hit full stride during the warm spring semester nights of 1974. It was on March 3 of that year that briefly, oh so briefly, the University of South Carolina held the official record for the number of students who stripped down to their bare essentials — gym socks and tennis shoes and, well, nothing else — and streaked en masse across campus.

Stan McGuffin is proud to have been one of those 508 students — and that is the naked truth.

Stan McGuffin: I'm not sure exactly how it got started at the university. But at some point there was a competition between colleges going on as to who who could get the most people to participate in a streaking event and somehow the fraternities and sororities at the university, I think mainly the fraternities, sort of became the the focal point for trying to organize a streaking event.

Stan McGuffin is an attorney now. Buttoned down, bespectacled — a model of American jurisprudence. But 47 years ago, he was a college sophomore at South Carolina, majoring in finance and minoring in having a good time. He was a member of Sigma Alpha Epsilon fraternity.

The plan was for the fraternities to wrap up their weekly business meetings, then assemble on the ramp near Bates House and, you know, get down to the basics. It wasn’t just fraternity guys participating — there were a lot of non-Greek students and a few female students who gathered, as well. McGuffin remembers how the evening kicked off in his fraternity house at the old McBryde Quadrangle.

Stan McGuffin: As our meeting came to a conclusion, I remember our fraternity president, you know, saying something to the effect, ‘Well, that concludes our meeting. And now we have to all get on to the streak.’ And he stepped out from behind the bar and he'd taken his pants off. And so he stepped out from behind the bar, naked from the waist down. And so for me, that was the first participant in the streak (laughs).

McGuffin says all of the students were assembling outside — it was dark at that point — and a few shy looks were exchanged.

Stan McGuffin: Most people still had their clothes on, just kind of looking, waiting to see what was going to happen. People started taking their clothes off and there was, you know, looking around to see who was really doing it. And before you know it, you know, pretty much everybody out there was standing around the ramp naked, waiting for somebody to say, start running.

The streakers got the signal and took off. When they hit Greene Street near the Russell House, a crowd of onlookers, estimated at 5,000 in size, was there to cheer them on. At first, there was a degree of anonymity for the streakers, who were running fast and about 8 to 10 people wide. But the crowd pressed in on both sides, and the streakers ended up having to run nearly single file.

Stan McGuffin: And the funny thing for me and what I specifically recall was, is as we were running down Greene Street, you didn't make a lot of eye contact with the crowd because you weren't sure who you're going to see.

And for me personally, you know, as we were going down Greene Street because we were now in a single file line, you started going slower and slower and slower. And at points you would stop. And I remember coming to a dead stop and just happened to look over in the crowd and saw a relative of mine. And it was the only person I saw the whole evening that I recognized. But I mean, I stopped right in front of there, right in the middle of Greene Street (laughs).

Once the streakers made it through the gauntlet of gawkers on Greene Street, they went past the Observatory, then turned and headed down to the Horseshoe.

Stan McGuffin: And then by this time, some of the crowd was starting to disperse. Some of the participants were starting to disperse. And anyway, those who were in it was still a large group went on down through the Horseshoe and stopped at the house. And I think President Jones was the president of the university at the time. And he had come outside and was shaking people's hands as a as they passed by his house. And I think his wife was there as well and was shaking hands.

OK, let’s hit the pause button for just a second here. Picture this with me: The president of the university — and his wife — standing out in front of the President’s House on the Horseshoe, shaking hands with streakers as they ran past. Pretty cool. Pretty cool.

The streakers then headed for the Thomas Cooper Library for their final bit of revelry.

Stan McGuffin: And one of the distinct memories I have and one of the funniest things when people went into Cooper library and there weren't a lot of people in there studying, but there were good many people. A good many of the streakers went into the library and got up on some of the desks and were dancing on the desks. And I had this this vision of, like the old go go dancers in the cages. It was like every pane on the library almost had somebody in the window dancing, you know. And so it was one of my most vivid memories of the event.

And that was the Gamecock streak of 1974. 508 students, the biggest crowd of streakers in the nation at that point. A week later, South Carolina lost claim to the title when more than 1,000 students at the University of Georgia let it all hang out in a streak of their own.

The fame was short-lived. But the memories? Just ask Stan McGuffin. The memories last a lifetime.

That’s all for this episode of Remembering the Days. Copyright laws don’t allow us to use the original Ray Stevens version of The Streak, the novelty song that came out in 1974 during the height of the fad. But special thanks to musician Thom Harman who delivered an acapella version of that familiar tune.

Next episode, we’ll revisit the late 1960s when the university built a tower and a bridge on the east side of campus. At the time, the university hill neighborhood didn’t like the tower, and the students weren’t too fond of the bridge. I think there’s a story to be told about that.

Thanks for listening today, and I hope you can join us for the next trip down memory lane at the University of South Carolina. See you then, and forever to thee.