A long ride draws to a close

Cantey Heath’s 36-year career at the University of South Carolina began in alumni relations, pivoted to fundraising, then took another turn when he became special assistant and chief of staff to former university president Harris Pastides. 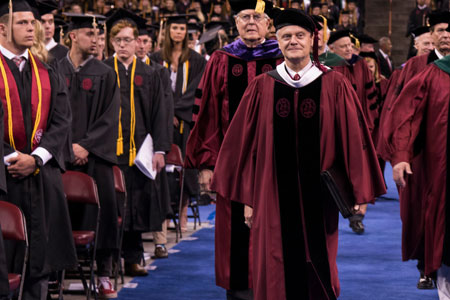 For the past four-and-a-half years of his 36-year career at the university, Cantey Heath, center, has been secretary of the Board of Trustees and headed the commencement committee.

For the past four years, he has been university secretary and secretary of the Board of Trustees and shepherded university commencement ceremonies. And for 30 years, Heath was also the secretary-treasurer of University Associates, a town-and-gown community relations group.

In addition, his family has been associated with the university since its founding — Heath comes from a long line of former graduates and even faculty and staff members from the 19th and 20th centuries. Now that he’s headed into retirement, could Heath write a book about all that’s happened at the university since his career began in 1985?

“I have good notes — it would be quite a drama,” he said jokingly during a recent interview. “But what it comes down to for me is this — I love my alma mater, I love the city of Columbia, I love the state of South Carolina. It's a privilege to have served in all of these capacities.”

Heath could add “research assistant” to his long list of titles — he earned bachelor’s and master’s degrees in history from the university in 1981 and 1985, respectively — and worked as a graduate student in the Institute for Southern Studies and the South Caroliniana Library.

“I really enjoyed being at the university as a student, and certainly I considered all options, including teaching, but I gravitated toward the administrative side,” he said.

Working in development for many years, Heath was the fundraiser who cultivated one of the university’s first $1 million scholarship gifts, which came from S.C. Tees Inc. and the William M. Gregg II family.

“Friends would say, ‘I don’t see how you fundraise — I would hate going around begging for money,’ to which I would respond, ‘I’m not begging for me — I wouldn’t like that either! I’m seeking support for the institution that is so important to the people of South Carolina.’”

During the university’s Bicentennial Campaign, concluded in 2001, Heath was managing the development officers for each of the university’s colleges and schools. That led to his first interactions with Pastides, who was then dean of the Arnold School of Public Health and later vice president for research.

“I continued to work with him on fundraising efforts, and we continued to have a strong relationship, and that’s how I ended up working in the president’s office.”

Heath likes to say he has enjoyed the ride of his long tenure at the university, even the bumpy parts that occurred during the latter years of the presidency of James Holderman, which ended in 1990.

The past few years have had their stressful moments, as well, with the university’s accrediting agency inquiry following the most recent presidential search. Consultants made recommendations for improving board governance policies, which have significantly improved the board’s practices, Heath said.

“I think the university board is in a better place now, so it’s a good time for me to turn the page and let the future chapters unfold.”

But Heath’s ride isn’t over just yet. While his myriad responsibilities at the university have come to a close, he continues to serve as president of the S.C. State Fair Association — an organization whose 19th-century founders include Heath’s forebears — and which raises significant resources for college scholarships for South Carolinians.

“Other than devoting more time to that, I really have no plans, and people find that hard to believe,” Heath said. “I'm really going to try retirement. And if it drives me crazy and drives my wife crazy, I'll have to figure something out.”