History professor Nicole S. Maskiell writes for The Conversation about how Colonial-era figures like Hamilton fit into America’s long history of enslavement, and how slavery fueled networks of power that have lasted through the ages.

Alexander Hamilton has received a resurgence of interest in recent years on the back of the smash Broadway musical bearing his name.

Anti-slavery, but not anti-wealth from slavery. Joe Sohm/Visions of America/Universal Images Group via Getty Images

But alongside tales of his role in the Revolutionary War and in forging the early United States, the spotlight has also fallen on a less savory aspect of his life: his apparent complicity in the institution of slavery. Despite being a founding member of the New York Manumission Society, which sought gradual emancipation of New York’s enslaved population, Hamilton benefited from slavery – both personally and by association.

As a historian of early America and Northern slavery, I study how Colonial-era figures like Hamilton fit into America’s long history of enslavement, and how slavery fueled networks of power that have lasted through the ages.

A life entwined with slavery

By Hamilton’s time in pre-revolutionary America, wealthy Northerners like him not only benefited from and propagated slavery, but enjoyed centuries of generational wealth built on the labor and lives of enslaved people.

Hamilton’s early years in the Caribbean were also marked by slavery. He was born on the British West Indies island of Nevis in the 1750s into a household that held slaves. By age 11, he was working as a clerk for Beekman & Cruger, a firm based in New York that traded enslaved people and other commodities – like food products and wood for shipbuilding – that fed the slave economies.

After Hamilton moved to New York in 1773, he remained closely tied to slaveholding elites. His sister-in-law’s house, where he was married, was served and maintained by enslaved people. The house where he died, belonging to his close friend William Bayard Jr., was also staffed by enslaved people.

Today’s debate about reparations for slavery dates back to Hamilton’s era. Except in the past, reparations were actively sought out by the owners of enslaved people.

Some Loyalists – those who opposed the American Revolution – received compensation from England for losses during the war.

The “Book of Negroes” was a register of over 3,000 escaped enslaved people who were evacuated from New York by the British as part of wartime commitments of freedom for service. It was compiled by British Commander Sir Guy Carleton as a safeguard against compensation claims by former slaveholders for the loss of what they considered their property.

Northern elite slaveholders sought and sometimes received reparations for losses they experienced during the Revolutionary War. Reparations ranged from restitution for the loss of enslaved people who escaped and gained freedom behind British lines to compensation for the expense of maintaining property (which included enslaved people) that were commandeered by Revolutionary forces.

Hamilton himself represented at least 44 Loyalists in lawsuits related to seizure or use of property, which sometimes included enslaved people, during the war. However, he objected to the return of runaways to their former enslavers.

Those on the Patriot side – who supported the Revolution – also received restitution for enslaved people they lost during the war. The Rhode Island General Assembly passed an act in 1778 that said since enslaved people were “deemed the Property of their Owners … Compensation ought to be made to the Owners for the Loss of their Service.”

But what of compensation to the descendants of formerly enslaved people for their ancestors’ free labor?

Since the mid-20th century, in Western Europe and the U.S., reparations to oppressed people have taken several forms: on an individual basis, within an institution or across an entire country. They’ve taken monetary and nonmonetary approaches, and pertained either to slavery alone or to slavery and its aftereffects.

Some of these modern reparations have historical precedent as well, such as when Britain compensated some Black Loyalists in the 1780s for unpaid labor provided during the war. 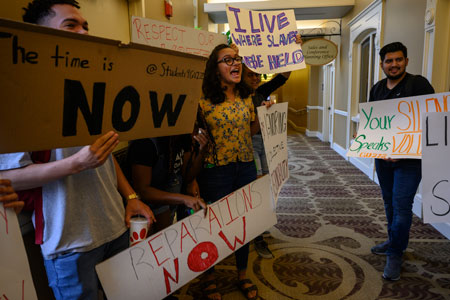 There is also the American Civil War’s Field Order No. 15 issued by Union Gen. William Sherman in 1865. It is popularly remembered as promising “40 acres and a mule” to formerly enslaved people freed along the coast of Georgia – though it was quickly overturned and did not originally include a mule.

In recent years, universities and other institutions with ties to slavery have undertaken initiatives to uncover past atrocities, or established scholarships for descendants of enslaved people and other underrepresented groups.

Some cities, including Evanston, Illinois, and Asheville and Durham in North Carolina, are establishing their own approaches to reparations, and are working to define guidelines for the use and distribution of funds.

While numerous organizations and government bodies debate how reparations should take place in the modern era, “Hamilton” the musical provided real opportunities for actors of color to advance in a historically underrepresented field.

Yet the show is not without its critics, specifically as it relates to the exclusion of historical people of color who populated the world of Alexander Hamilton. These include noted spies Cato and James Fayette, Black brigade fighter Col. Tye and antislavery activist William Hamilton, purported to have been Alexander’s son with a free Black woman.

Historical and contemporary representation in popular tales like “Hamilton” is increasingly being used as a step toward correcting the imbalances from slavery’s legacy. And the key questions posed within the musical’s “Who Lives, Who Dies, Who Tells Your Story” number are some of the same questions being asked within the reparations movement today.

This article was updated to clarify the nature of compensation sought and received by Loyalists and to ensure James Fayette is noted by his chosen name.