In the long history of schoolteachers in South Carolina, Matilda Pinckney's story stands out. Born a slave on the historic Horseshoe at the University of South Carolina, Pinckney was later trained at a Normal School on the university campus and would go on to a 30-plus year career as an educator.

If I told you that once upon a time, a young woman named Matilda completed her training on the campus of the University of South Carolina to become a school teacher and went on to a distinguished career in education — I’m guessing you might shrug your shoulders and say, ‘So what? South Carolina has graduated thousands of teachers. What’s so special about this one?’ 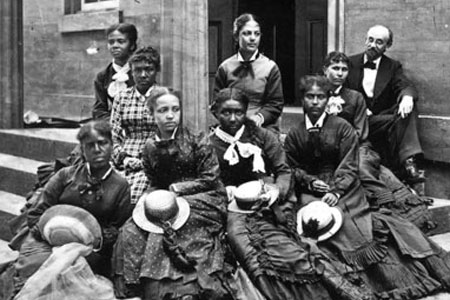 Students at the Normal School, a training school for teachers, pose for a portrait on the steps of Rutledge College on the University of South Carolina campus. It is possible that Matilda Pinckney is one of the young women pictured here.

The story of Matilda Pinckney is unlike that of almost any other schoolteacher in the history of the Palmetto State. That’s because her story literally begins on the historic Horseshoe of the University of South Carolina.

I’m Chris Horn, your host for Remembering the Days, and today we’re going back to 1860, just before the Civil War began. That was the year Matilda Pinckney was born on the campus of the university. Her parents, Titus and Lucretia, were enslaved people owned by Maximilien LaBorde, a Carolina professor of logic and literature.

Jill Found: "So both Titus and Lucretia were owned by Maximilian LaBorde. And LaBorde hired Titus out to the school. You know, he rented Titus's labor to the school. It seems like Titus was maybe working as a baker for the school…. Lucretia never seems to be hired out to the school, but it's very likely that her and Titus lived on campus, very possibly in the attic above LaBorde's house. And we know enslaved people lived there. That's McCutchen House today."

That’s Jill Found, a Ph.D. candidate in history at the University of South Carolina whose research has uncovered the stories of former enslaved people at the university in its antebellum days.

Found says Matilda very possibly was born in the attic of McCutchen House on the Horseshoe where her parents lived. She was only about 5 years old when Gen. Sherman’s troops rolled through Columbia in February 1865 and effectively freed all of the enslaved people in the city.

Jill Found: "So we don't know a lot about Titus and Lucretia, except that after the Civil War … we know that they take the last name Pinckney as their last name."

What did the Pinckneys do with their new-found freedom? Well, they did what a lot of former slaves did — they continued to work for their former owner, albeit as free laborers.

Jill Found: "According to the census in 1870, they're living on campus still. They're actually listed right below LaBorde in  the census record. So very likely they're either living with him or near him, which wouldn't have been uncommon for formerly enslaved people, especially people who were involved in domestic work to still live with their former slave owners — now, obviously, as free laborers, but this happened pretty consistently. So it's not terribly surprising that they're still living on campus."

Matilda Pinckney was 10 years old in 1870 and attended the Howard School in Columbia — an elementary school established just after the Civil War to educate the children of former slaves. A few years later, she had an extraordinary opportunity. From 1873 to 1877, a Normal School was opened on the campus of the University of South Carolina. Normal School was the term used for institutes that trained schoolteachers. It’s interesting to note that the young Black women who studied at the Normal School did so about 20 years before the first white women were admitted to the university in the 1890s.

The Normal School was housed in Rutledge, that’s the original building on the Horseshoe, and Matilda received her training there to become a schoolteacher. It’s obvious perhaps, but I’ll point it out anyway: Just a few years before this, Matilda had been born just across the Horseshoe to parents who were enslaved. By the time she was a teenager, Matilda was walking across the Horseshoe from what we now call McCutchen House to the Normal School to study and become a schoolteacher.

Because of racial politics in South Carolina at the time, the university closed in the late 1870s and the Normal School along with it. When the university reopened in 1880, it was once again a whites-only institution. But Matilda Pinckney had already moved on.

She became a schoolteacher in segregated schools in Columbia and in the town of Abbeville for at least 30 years. In the early 20th century she became involved in the temperance movement to abolish the sale and consumption of alcohol. When she died in 1932, Matilda Pinckney was eulogized as a dedicated friend and faithful Christian — and a wonderful schoolteacher.

It’s noteworthy that one of Matilda’s fellow students at the Normal School was Celia Dial Saxon, who taught at Black schools in Columbia for 55 years. Also, one of Matilda’s brothers, Thomas Pinckney, attended the University of South Carolina during that brief window in the 1870s when Black men were admitted.

Thomas went on to become a successful businessman in the African American community in Columbia, where he lived for the rest of his life.

How many more success stories might there have been if the University of South Carolina had continued to admit Black students in the late 1800s? How many more effective school teachers like Matilda Pinckney and Celia Dial Saxon and successful businessmen like Thomas Pinckney?

Jill Found: "And it's hard as a historian not to look at that as a sort of lost moment for stories about, you know, the people as they come out of slavery and they come up from slavery. There are formerly enslaved people serving in the South Carolina state house at this moment. And I can only imagine the exceptional things that young African-American men would have been able to do if they'd been able to attend the university for more than just the few years when it was open because we know that those students go on to do exceptional things. … The students it produced did great things. And there's no reason to think that that wouldn't have continued to happen if it had remained an integrated school."

Of course, we’ll never know what could have been, but it’s a good thing that stories of these forgotten individuals like Matilda Pinckney are now coming to light. The University of South Carolina has a rich and vibrant history, and it’s made more complete when we learn about a schoolteacher born a slave on campus, educated on the Horseshoe, who went on to teach hundreds of children in South Carolina over the course of her lifetime.

That’s all for this episode. Next time, we’ll hear from a former first lady at Carolina who recalls some humorous anecdotes about the families of former University of South Carolina presidents. Remembering the Days is produced by the Office of Communications and Public Affairs. I’m Chris Horn, see you next time and forever to thee.