Remembering the Days: Tales from the President's House, part 1

The President's House on the historic Horseshoe has been home to every university president since 1952. Patricia Moore-Pastides, who lived in the house as university first lady for 11 years, talked with the now-grown children of those former presidents to find out what life was like for them during their years in the President's House.

I’ve got a story for you today that includes …

a young girl hurling water balloons at students from a third-story window on campus...

a kleptomaniac bluejay swiping earrings when no one is watching …

and a Springer spaniel that chews up the expensive shoe of a houseguest. Just one shoe, not the pair.

I’m Chris Horn, your host for Remembering the Days, and today we’re taking a peek behind the curtains of the President’s House at the University of South Carolina to find out what life was really like for the families who have lived there.

Patricia Moore-Pastides, a former first lady at the University of South Carolina, has some interesting stories of her own to tell about living in the President’s House with thousands of college students as her next-door neighbors. We’ll hear those in the next episode.

Today, Patricia is going to share secrets and stories that the now grown-up children of former university presidents shared with her. Those stories are featured in her book called At Home in the Heart of the Horseshoe.

But before we start telling tales about these former first families — here’s a little background about the President’s House itself. I’ll make it quick. The original president’s house was located at the top of the Horseshoe, just in front of where McKissick is now, but that house was demolished in the 1930s. The current president’s house, located between Rutledge and Legare, was built in 1854 as a duplex residence for professors. The house was substantially renovated in the early 1950s when it became the President’s House.

President Donald Russell moved in with his wife, Virginia, and their four children in 1952. The backyard was not really landscaped back then, which gave the three youngest Russell children a place to dig for treasures. Patricia talked to Donald Russell Jr., who was the oldest of the four kids and a high school student at the time.

Patricia Moore-Pastides: “He did say that behind the house where it's a beautiful garden now that was really just a dirt patch, and the little ones would be digging in it, you know, doing their whatever, excavating, making their makeshift sandboxes. And so they uncovered some weights, you know, like those that you would put on a bar and lift weights. And so that was the beginning of Donald's bodybuilding because he was kind of a scrawny little fellow who wanted to become sort of Mr. Muscle Beach.”

Donald Russell Jr. began working out religiously with those barbell weights that his siblings dug out of the dirt. He didn’t achieve an Arnold Schwarzenegger physique, but Patricia says he was in very good shape, still playing tennis, when she talked to him more than 60 years after he lived in the President’s House. 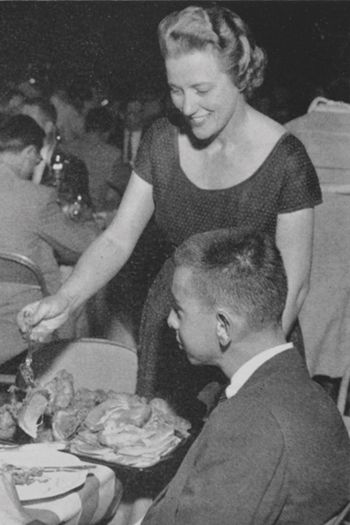 Donald Jr. also remembered that his mom, Virginia Russell, would invite every graduating senior to the President’s House for dinner.

Patricia Moore-Pastides: “She believed that every senior should have dinner at the President's House in the backyard before they graduated. And there were roughly 500, 550 graduates each year. And so she would do five nights of dinner for 100. And she and the housekeeper and the housekeeper's husband would make all the food and then she would hire people from in town to help her serve, and they would set up tables in the backyard.”

They served up fried chicken and mac and cheese along with Virginia Russell’s signature dessert — strawberry shortcake. You might gain a pound just from reading the recipe, which is in Patricia’s At Home in the Heart of the Horseshoe book.

The next presidential family at South Carolina was the Sumwalts, Robert and Caroline, who were in the President’s House from 1957 to 1962. Their granddaughter Elizabeth was a frequent visitor, and there’s a cute photo in Patricia’s book that shows Elizabeth and the rest of her Brownie Scout troop surrounding President Sumwalt in his office. Elizabeth looks so angelic in that photo.

Patricia Moore-Pastides: “And then she told a funny one about the time she was at the third floor of the President's House with an older cousin one day, and they were dropping water balloons down on the students  who were walking below. And she said, ‘We weren't really trying to hit them. We just wanted to scare them. So we dropped them like to one side or the other.’ So she got into a fair bit of mischief there in the President's House.” 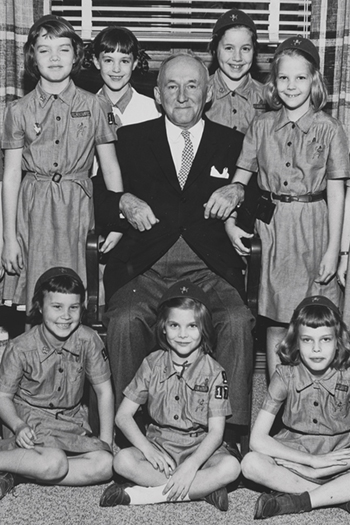 Elizabeth, seated in front of her grandfather, Robert Sumwalt, poses with her Brownie Scout troop for a photo session in the president's office. She later confessed that she and an older cousin dropped water balloons on students passing by the President's House.

President Tom Jones took the helm in 1962 and led the university until 1974 — a tumultuous era everywhere in the United States that at the University of South Carolian was punctuated by enormous campus growth, Vietnam War protests, the streaking fad and so on. The Joneses had five children — four boys and a girl nicknamed Cissy who had a lot of stories to share with Patricia.

Patricia Moore-Pastides: “She's quite the animal lover and she still is today, but she owned a horse and they kept it down at the State Fairgrounds. And from time to time, she would bring it up to the house and just leave it behind the president's house. But I guess the horticulturist of the time wasn't too happy about that because of the messes the horse would leave behind.”

Cissy rescued a bluejay, named it Vida and kept it as a pet. Vida would fly around inside the President’s House and was attracted to shiny objects.

Patricia Moore-Pastides: “She said every afternoon her mother would sit in the library and have her cocktail, and she'd pull off her earrings, you know, relax, kick back after a busy day. And  she started realizing that her jewelry was missing. And when they went to dry clean the draperies and they took down these big draperies with the valence — that's where they found her earrings. So this blue jay had actually been stealing them and putting them up there.”

Cissy also kept a sparrow named Boris and a parakeet named Jerry. She bought a live gamecock rooster named Rusty for her father and even had a garnet-and-black harness made for the bird so he could be walked around outside.  Students living nextdoor in Legare residence hall complained about the rooster crowing at all hours of the day and night.

Cissy remembers watching through the windows of the President’s House as a riot began in May 1970 with National Guardsmen confronting thousands of students on the Horseshoe. You can learn more about that incident in the episode entitled “Month of May, 1970.”

After the Joneses came the Pattersons, President William Patterson and his wife, Mary Alice. They were in the President’s House for just three years and had no children. Perhaps the most notable change during their tenure was the relocation of a decorative water fountain from the front of the house to the rear. It seems Mrs. Patterson got tired of students dumping detergent into the fountain and turning it into a bubbly mess.

The Holderman family arrived in 1977 — President James Holderman, his wife, Carolyn, and their three daughters Nancy, Betsy and Jamie. They had a 14-year-old schnauzer named Missy who, having reached a ripe old age for a dog, expired one day — at just the wrong time.

Patricia Moore-Pastides: “The dog died at a very inopportune time when Mrs. Holderman had just received a call that a dignitary was on their way to the house. So the kids came running in and said the dog died, and she wrapped the dog up in its favorite blanket and put it in the freezer of the garden house because, she said, ‘We just can't deal with the dog now.’”

Now, before anyone gets upset, Missy the schnauzer was only temporarily frozen after her death. She was properly buried in the President’s House garden and, to this day so far as we know, still rests in peace there.

John and Norma Palms were the next president and first lady to occupy the President’s House. Their children were grown, but they had a dog named Lady Carolina — a mischievous Springer spaniel. 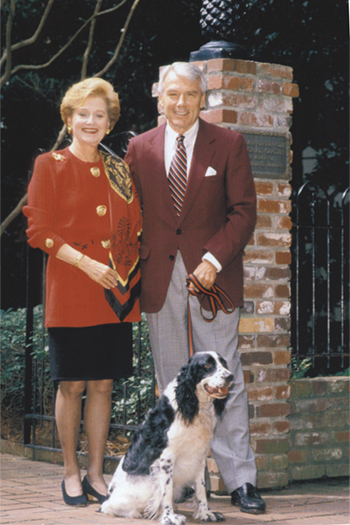 Norma and John Palms with Lady Carolina, a Springer spaniel with a taste for fine shoes.

Patricia Moore-Pastides: “And I guess one night they had some honorary degree recipients that were staying at the house … And when they got back from the dinner, the wife discovered that the dog had chewed up one of her shoes, the pair that she was supposed to wear to graduation. Mrs. Palms said she was a very good sport about it, and she wrote her a lovely thank you note after they returned home because they felt like they were treated royally and they loved the university and were so honored to receive the honorary degree. She said, ‘I just don't know what I'm going to do with this one doggone shoe.’”

Andrew and Donna Sorensen were the last couple to occupy the President’s House before the Pastides arrived in 2008. Every year, President Sorensen would dress up in a chef’s hat and serve his wife her favorite dessert for her birthday — an Italian cream cake, which is as decadent as it sounds. You can find the recipe for that in Patricia’s book, as well.

Next time, we’re going to hear a about what life was like for Patricia and her husband, Harris Pastides, during their 11 years in the President’s House. There’s an off-color story about a young man relieving himself in the herb garden, but we’ll revisit that next time.

Today’s episode is sponsored by the University of South Carolina Press, publisher of books that illuminate the history and culture of South Carolina and the American South. Learn more at uscpress.com. At that website you can also use the promo code JMOORE — that’s the letters J M O O R E, to get 25 percent off Patricia’s book, At Home in the Heart of the Horseshoe, and her two cookbooks that highlight the Mediterranean diet.

Remembering the Days is a production of the University of South Carolina. I’m Chris Horn, see you next time and forever to thee.

Take a stroll down more than 200 years of memory lane with Remembering the Days, a UofSC podcast.