Remembering the Days: Tales from the President's House, Part 2

Patricia Moore-Pastides and her husband, Harris Pastides, the 28th president of the University of South Carolina, lived in the President's House for 11 years with thousands of college students as their closest neighbors. As you might imagine, that led to some interesting experiences, as Patricia relates in this episode.

Think back for a moment to your college days — the dorm life, the music, the sights and sounds of campus in every season …. all the memories of those four or five or however many years you were a college student.

What if you had lived on campus not just for a few years but for more than a decade? That’s exactly what Patricia Moore-Pastides did. She and her husband, Harris Pastides, the 28th president of the University of South Carolina, lived in the President’s House on the Horseshoe for 11 years, from 2008 to 2019. And what memories they have! 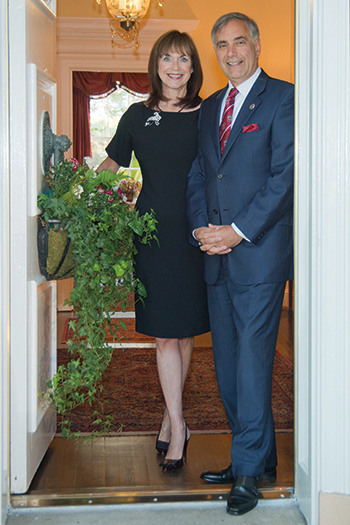 Patricia Moore-Pastides and Harris Pastides at the front door of the President's House, where they lived from 2008 to 2019.

I’m Chris Horn, your host for Remembering the Days, and today we’re dishing up Part 2 of Tales from the President’s House. In Part 1, Patricia shared stories about former presidents’ families from the 1950s up until 2008 when she and Harris moved in. Today she’s sharing her own anecdotes of what life was like for them with several thousand college students as their closest neighbors. Like the time it snowed in 2014 and classes were canceled.

Patricia Moore-Pastides: “I was in California helping my daughter and son-in-law with their second child. And Harris had been out there for the birth, but returned when the second semester started. And suddenly we started having these back-to-back snowstorms in Columbia. And school was closed for quite a few days and Harris started getting a little bit lonely and antsy. So he tweeted out something to the effect of ‘Do you have cabin fever? Well, so do I. If you're around this afternoon at, say, four o'clock, come to the President's House and I'll show you around. Maybe we'll have some hot chocolate together.’

And he put this out as a tweet thinking he might get half a dozen students or 10 or something like that. And he had so many students — he gave like six tours of probably 20 people each. It was incredible. And before they came, he looked around the house and could find no hot chocolate. So he ran down to CVS and they didn’t have any either.”

Fortunately, the students didn’t really care about getting a cup of hot chocolate. They just wanted to hang out with the university president on a snowy afternoon and check out the inside of the house where he lived.

Patricia Moore-Pastides: “We were always so delighted by the students because of their accomplishments and their personalities and their plans and their enthusiasm … the students are why we're here and so to have them, you know, just come by the house in small groups or large groups was great.”

Sometimes the students showed up outside the President’s House in droves. Like in 2010, 2012 and 2014 when ESPN Gameday set up shop on the historic Horseshoe, and hundreds of students camped out there overnight.

Patricia Moore-Pastides:  “At midnight, 1 in the morning, Harris and I would go out, and he'd be taking selfies with everybody and high fiveing them. And I had these big baskets of apples and stuff and I go around with my apples and trail mix ... It was so much fun, but no sleep at all, no sleep. We would have, usually we would have houseguests because that would be the night before a big game, and we would pass out earplugs for them because we knew they wouldn't be sleeping because there was a lot of partying going on, on the Horseshoe with music and everything.”

Those were raucous nights, but Patricia says most of the time she and Harris could get a good night’s rest, even with so many students living in such close proximity to the President’s House.

Things did get pretty noisy again, though, in 2017 when the men’s basketball team made it to the Sweet 16 after defeating Duke at a March Madness game in Greenville. Students were pretty psyched and a lot of them flocked to the Horseshoe later that night.

Patricia Moore-Pastides: I was in bed, Harris was coming home from Greenville. And suddenly I heard this tromping, tromping, tromping like elephants. And I looked out the window and there were just throngs of students, like just coming on to the Horseshoe from all around the house and all the entrances to the Horseshoe. And they were climbing up the Maxcy monument and standing all around it and cheering and yelling. They started to yell, ‘Cancel classes!’

So I called Harris on his cell phone. I said, ‘Are you close to home because the kids are on the Horseshoe? I think they'd like to hear from you.’ So that was pretty exciting.”

One of Patricia’s more memorable moments at the President’s House did not involve a crowd of students but rather just one. She was stepping out the back door one afternoon on her way to an engagement when she spotted someone in the backyard garden.

Patricia Moore-Pastides: “I saw this young man with his back to me. But it was very obvious he was peeing in my herb garden. And I kind of yelled out, ‘Hey, what do you think you're doing?’ And he turned around and he was kind of mortified to see anybody there. And I said, ‘You wait right there.’ And I came running down the stairs and kind of approached him and I said, ‘You know, what, what's going on?’ And he said, ‘I'm so sorry. I didn't know anyone lived here.’ And I said, ‘Well, this is the president's house.’ I said, ‘I'm the first lady. I'm married to the president. And this is my herb garden that you're relieving yourself on.’”

Talk about an awkward moment. I don’t know about you, but I’m not so sure how I would have reacted if I had been in Patricia’s shoes. She kept her cool, but she wasn’t going to just let this guy slink away.

Patricia Moore-Pastides: “And he said, well, I didn't know. I didn't I didn't know anyone lived here. And I said, So you think it's OK to pee on state property if no one lives there? I said, what is your name and what year are you? And he gave me this name, which was like John Smith or something. And I thought, Oh, right. It's made up, you know. And he said he was a fifth-year senior and that even shocked me further. I said, you're a fifth-year senior and you don't know where there are public restrooms on the Horseshoe.

So he was very apologetic. And but anyway, I wanted to find out if he was really telling me the truth. So I reported him. So they they called him up to student judiciary. And it turned out that he had given me his correct name. And he admitted to it and stuff. And then they called me and they said, "Well, what do you think his punishment should be — should we have him clean toilets or whatever?”

That sounds like a reasonable disciplinary action — scrubbing campus toilets after using the President’s House herb garden as an outdoor commode. But Patricia is a very gracious person, so she asked, instead, for a simple letter of apology.

Patricia Moore-Pastides: “And he wrote this letter and it was all about how his parents had not reared him to behave this way and so forth and so on. And by the end of the letter, he said even though it was under such unusual circumstances, it was still an honor to meet you. And there were these herb seeds in there. So I just cracked up laughing. And I put everything back in the envelope and I put it in my archive boxes because I learned pretty early on that it was important to save the correspondence that came to the President's House. So it's in there. And I figure someday when someone says, ‘Let's look and see what happened during the Pastides era,’ you know, they'll find that and get a good laugh out of it.”

Funny story. And if you want to read more about the Pastides’ time in the President’s House, check out her book, At Home in the Heart of the Horseshoe. It’s published by the University of South Carolina Press, the sponsor for this podcast episode and the publisher of books that illuminate the history and culture of South Carolina and the American South. Learn more at uscpress.com, where you can use the promo code J-M-O-O-R-E to get 25 percent off Patricia’s book.

Remembering the Days will be back in two weeks with a story about what happened more than 50 years ago when university administrators decided to expand the campus eastward. Until then, I’m Chris Horn. Thanks for listening and forever to thee.