Faced with skyrocketing enrollment in the 1960s, the University of South Carolina did what many universities across the country were doing — it began acquiring adjacent land to grow. But residents of University Hill were not pleased when the university began building a high-rise dormitory/conference center in the midst of their quiet neighborhood.

I’m walking through Gibbes Green on the University of South Carolina campus and heading toward the Pickens Street pedestrian bridge. If you stop in the middle of the bridge and look up, you’ll see one of the campus’ most iconic buildings — the 18-story Capstone House with its distinctive circular top.

That building and this pedestrian bridge have been here for decades along with the rest of the east campus — Gambrell Hall, Close-Hipp and the humanities and nursing buildings. But in the early 1960s, there was no bridge here and no university campus east of Pickens Street. It was just the quiet University Hill neighborhood. 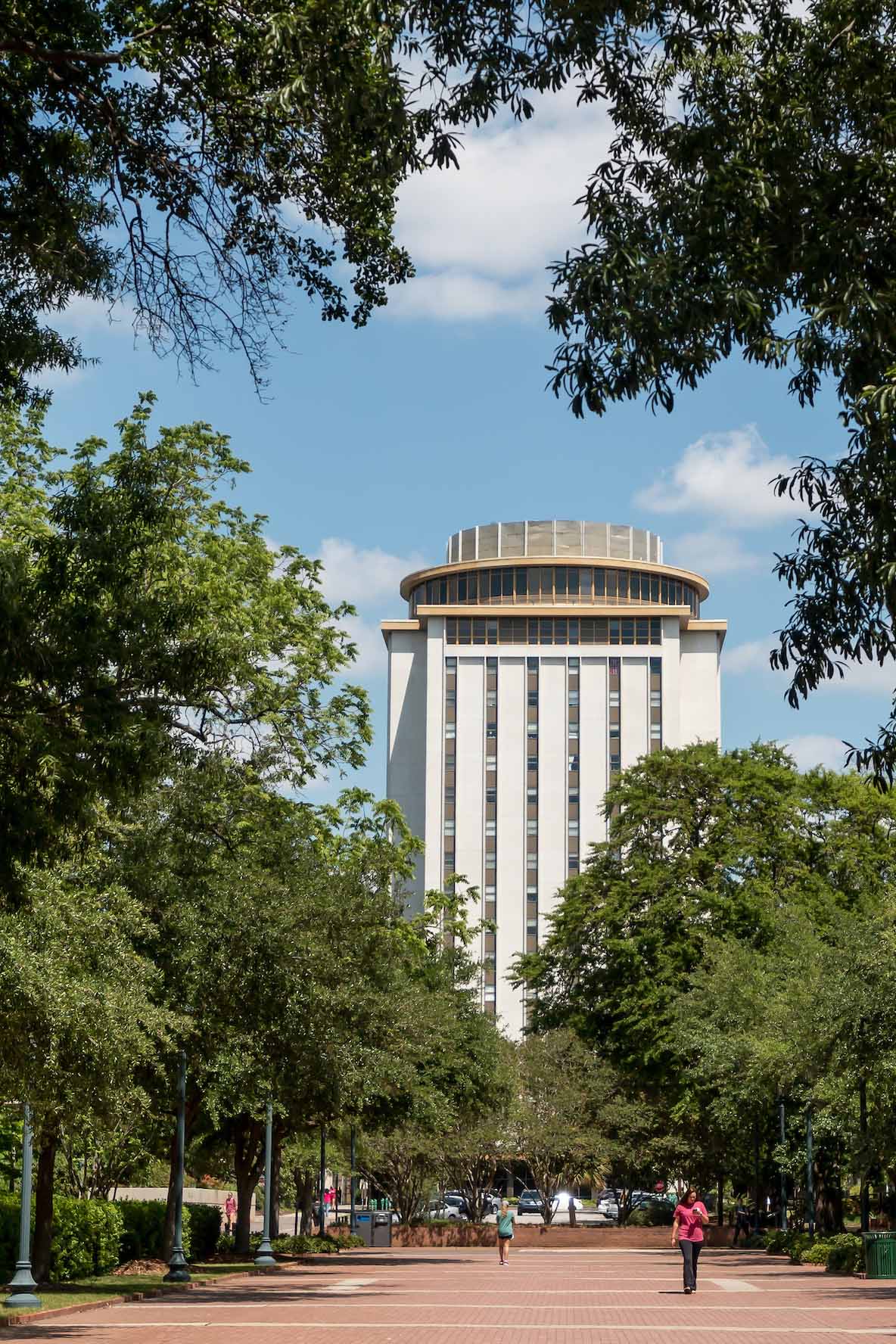 I’m Chris Horn, your host for Remembering the Days, and today we’re going back to the 1960s to get a handle on why the university campus expanded in this direction and what happened when it did.

Here’s a little context. In the 1960s, the oldest kids of the Baby Boom generation were coming of age and the middle class was expanding, which meant more families could afford to send their Baby Boom children to college. A lot more. And with student enrollments skyrocketing, universities everywhere were scrambling to make room for all the new students.

Like many universities across the nation in the 1960s, Carolina needed more land to accommodate more dormitories and academic buildings for more students. But when the university began acquiring about six blocks of the University Hill neighborhood as part of a major campus expansion, it did not sit well with the neighborhood residents.

"Needless to say, I was most distressed to learn by word of mouth what was to happen to the neighborhood in which I live. Certainly, it seems to me that the University officials who thought of this idea could have at least notified the property owners on Gibbes Court that they were going to ruin this neighborhood. As one of the property owners, I thoroughly disapprove."

Mrs. Mary McGeary, who had graduated from Carolina many years before, wrote that indignant letter in March 1966 to university president Tom Jones. She and her neighbors had heard in 1965 about the university’s 20-year plan to expand the campus eastward, westward and southward. But they didn’t know how quickly things were actually going to happen, and, frankly, university officials hadn’t bothered to tell the neighborhood about the plan to build an 18-story dormitory/conference center right in their midst.

Like Mrs. McGeary, a lot of other neighbors complained, more letters were written, more disapprovals were duly noted, but there was no stopping the project. The university began constructing a residence hall tower near the corner of Barnwell and College streets that would house about 600 students. Tom Jones had previously proclaimed that the University of South Carolina would become the capstone of higher education in the Palmetto State. And Capstone became the name of that high-rise building.

Lydia Brandt is an art history professor at South Carolina who specializes in the history of modern architecture. She and her students have conducted research on the university’s expansion throughout the 1960s and ‘70s, including the construction of Capstone House.

Capstone House opened in the fall of 1967 as an honors dormitory for women. The top of the building featured a restaurant with a revolving top, from which members of the public could enjoy a sumptuous meal and a birds-eye panoramic view of the surrounding city landscape. I actually remember eating there as a child shortly after it opened, and I was mystified as to how this restaurant could slowly spin while we were eating. I was completely oblivious at the time, of course, to the ways in which that building and the rest of the east campus expansion changed the character of the University Hill neighborhood.

The two humanities buildings were completed years ahead of schedule in 1968, followed in the next few years by much of the rest of the east campus buildings that I mentioned earlier — Gambrell Hall, Close-Hipp and the College of Nursing. A 10-story dorm named Columbia Hall was built adjacent to Capstone in 1971.

At the same time that all of this was happening, there was more campus expansion going on to the south in the Wheeler Hill Neighborhood — think of the area around Pickens and Wheat streets — and to the west in what was then known as Columbia’s Ward 1 where the Coliseum, the Moore School of Business and the Koger Center for the Arts now stand. The south and west campus expansions involved federal funding for urban renewal and displaced even more residents and businesses. We’ll explore what took place in those neighborhoods in an episode this coming fall.

The thing to keep in mind about the east campus expansion is that the university accomplished its goal of creating more living and learning space for its rapidly expanding  student population. But in doing so, more than 100 houses in the University Hill neighborhood were eliminated, and relations with that neighborhood were strained for a long time.

South Carolina was one of scores of universities across the country that were buying up adjacent land to expand their campus footprints in the wake of skyrocketing student enrollment. Suffice to say there were a lot of unhappy neighborhood residents nationwide who were affected — sometimes displaced — by university expansion during that era.

It should be noted that in more recent years, the University of South Carolina has gotten a lot better at listening to the concerns of residents in its adjacent neighborhoods and communicating more forthrightly about its plans.

So, I think we’ve established that the construction of Capstone House was not received particularly well by the University Hill neighborhood all those years ago. It turns out that the Pickens Street pedestrian bridge was not a popular project either, but it was the students who were most opposed to that project.  You might be thinking like I did: What’s the big deal about a bridge? The university wanted to build it so that all of the students living and studying on the new east side of campus would have a safe way cross Pickens Street.

The plan was to lower a portion of Pickens Street by about 14 feet and build a 40-foot-wide pedestrian bridge overhead to connect the original campus with the new east campus. The project required government funding and that meant a public hearing in 1972 at the state highway department. Hundreds of students showed up to protest the bridge, carrying signs that read: “Don’t make Carolina a concrete campus — save our grass.” Another sign was directed at Hal Brunton, the university vice president for operations who had become the face of all the campus growth. That clever sign read: “Stop Brunton before he spreads.”

The student protests failed — the bridge was completed in 1973 — but they made their voices heard.

Lydia Brant: “I think the student protests about the bridge weren't just about the bridge. They were about the university growing and becoming what many students around the United States called a multiversity. And that was a kind of slur that as, especially state universities grew exponentially so quickly, students saw that as a loss.

And part of this is rooted in the students’ protests of the Vietnam War and generally feeling like young people were powerless in the face of these massive government projects that seemed really inhuman. And I think that's the kind of larger thing that they were protesting.”

I would bet that students and professors who cross the Pickens Street bridge now would be surprised to know what a fuss it caused nearly 50 years ago when it was built, crossing over a quiet street to a quiet neighborhood that became home to the university’s east campus.

I hope you enjoyed this episode. This is our last show for spring 2021, but we’ve got a new slate of stories planned for the fall that will include the history of the university’s football stadiums, the story of a time when fraternities and sororities were outlawed on campus, a Who’s Who of famous visitors to the university and a lot more.

Remembering the Days will return in August, and I hope you’ll come back for a walk down memory lane at the University of South Carolina. Until then, I’m Chris Horn. Forever to thee.