Remembering the Days: If it ain't swaying, we ain't playing

The first football field at the University of South Carolina was a humble affair — some  wooden bleachers perched beside an empty field on the edge of campus. How that evolved into an 80,000-seat stadium is a story worth telling.

When the Gamecocks take to the football field every fall, Williams-Brice Stadium roars with the full-throated spirit of 80,000-plus diehard fans, a battalion of marching band members, cheerleaders, baton twirlers and dancers — and one hyperkinetic mascot, Cocky, emerging from a magic black box just before each game begins.

It’s a far cry from the first football game played on the University of South Carolina campus in 1898 when a few hundred fans huddled on simple wooden bleachers on a field situated about where the Russell House Student Union now stands on Greene Street. How that humble playing field evolved into the massive football stadium we have today is a story worth telling.

I’m Chris Horn, your host for Remembering the Days, and today we’re tracing the history of the university’s football field and stadium from the institution’s earliest days as a gridiron competitor up to the present. Better put your helmet on for this one. 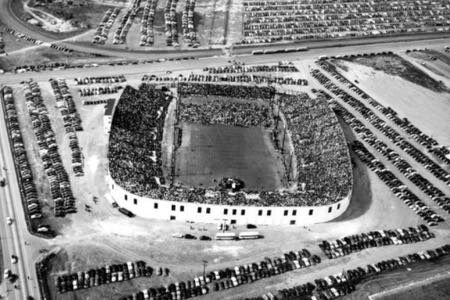 Carolina Stadium in the early 1950s.

American football first took hold among the Ivy League colleges and quickly spread across the country. The rough-and-tumble game was love at first sight for students and alumni, but college professors and administrators were not so enamored with the school of hard knocks that defined those early days of football. Here’s Elizabeth West, the university’s archivist who has researched and written extensively about South Carolina football.

Elizabeth West: “Football and other intercollegiate sports had not been welcomed on campus when they first started out in the 1880s and 1890s, and the students actually had to sneak off campus to play football, the first game being against Furman held in Charleston in 1892. And everyone snuck down there, and we lost spectacularly, I think it was 44 to zero. But there was a gradual acceptance of allowing sports to officially be part of the university  and perhaps not wholeheartedly, but more of a reluctant acceptance. And then with the 1902 Carolina-Clemson riot, which suspended our football games against Clemson until 1909, and then the violence of the game — terrible injuries, broken jaws, broken bones and some deaths nationwide to the point where President Theodore Roosevelt was considering banning the game — and he was a huge proponent of sports. So there was still,  I think, a lot of reluctance, a lot of uncertainty about this and its violence. But it really caught on with the students and alumni.”

Trustees at South Carolina actually suspended football as a varsity sport in 1906, calling it “too rough and expensive.” They encouraged the students to pay more attention to baseball instead. But students and alumni protested mightily, and the trustees soon relented. They realized football and school spirit already had become inextricably entwined, and by the next year, 1907, the football team was back on Davis Field.

As I mentioned, Davis Field was a simple affair — a 3,000-seat wooden grandstand designed by one of the university’s own professors and constructed at a cost of only $600. The field initially had no restroom facilities or parking, and the fencing wasn’t even secure enough to prevent spectators from just wandering up to watch the game without paying the 25-cent admission fee.

More seating was added to the field in 1908, and when a storm blew down the fence in 1914, the student body petitioned the Legislature for money to fix things up. The students promised they would perform the actual construction if the state would buy the materials. Subsequently, about 2,000 more feet of fencing was built, and engineering students added a 200-foot section of grandstand bleachers.

South Carolina played most of their home games there, but the big matchup with Clemson on Big Thursday during State Fair week was played at the State Fairgrounds, which had more seating capacity.

Fast forward to the 1920s, and college football stadium fever was raging everywhere. Having a modern stadium became a status symbol for college towns — a way to demonstrate they were keeping up with the times. Poor South Carolina with its then 7,000 wooden bleacher seats was woefully behind the times. By the late 1920s, some schools had stadiums that could seat 25,000 or more fans, and a few teams began dropping South Carolina from their schedules because of the limited ticket revenue they could expect if they made the trip to Columbia. Why play a team with a podunk field for such a small payout? 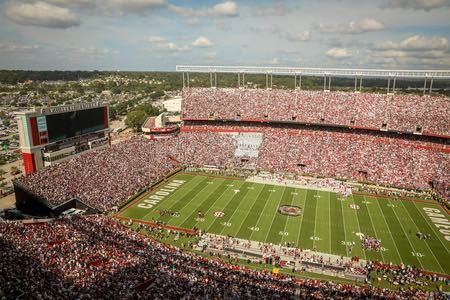 Gameday at Williams-Brice Stadium in 2019.

For a few years, South Carolina started scheduling more away games than home games because of its limited seating at Melton Field — the football field portion of Davis Field had been renamed for university president William Melton who had authorized a few improvements to the facility. In spite of those improvements, the university was often losing money when the team played at home because there just weren’t enough seats to generate sufficient ticket revenue to cover the minimum payout to visiting teams.

Elizabeth says the financial consequences of not having enough seating capacity was a contributing factor in the desire for a bigger football venue. That and a new phenomenon called Homecoming weekend.

Elizabeth West: "… 1927 was the first year that the University of South Carolina hosted homecoming events for alumni in relation to a football game. And I think that really helped things take off from there. They had been separate events, and Bernard Early was kind of the father of USC homecoming because he was the one who put these these two things together. That's such a huge tradition now that it's it's hard to imagine what homecoming festivities looked like without a football game being played that weekend. So that really married two important events, I think, with student and alumni life at the university and really gave it a tremendous boost."

To the relief of myriad football fans, the city of Columbia built Municipal Stadium in 1934, and it immediately became home field for the Gamecocks. The 18,000-seat steel-and-concrete stadium was a quantum-leap improvement over Melton Field, not only providing more seating for fans but also lots of restrooms and concession stands, plenty of parking and a press box that could accommodate the new-fangled radio coverage of Gamecock sports. The home team beat Erskine College in its first game at the stadium and defeated VMI in the second game in which the stadium was dedicated.

Rex Enright was the Gamecocks’ football coach from 1938 to 1942 and again from 1946 to 1956. He was glad to have lots more seats to fill, which allowed him to schedule big-time opponents for South Carolina’s growing base of rabid football fans. “If you’re going to lose,” he was quoted as saying, “lose to somebody big. It’s less embarrassing.” You’ve got to admire the man’s honesty!

The university assumed the debt and the deed to Municipal Stadium and renamed it Carolina Stadium. Football had taken a strong hold across the nation and especially in the South.

Elizabeth West: "Southerners love a good outdoor party. And so this really fit the bill, being able to gather and watch this game of strength and skill and socialize with everyone and come back to the campus.

So I think all of that really kind of attracted people to that spectacle, that social opportunity, especially in the fall in the South with the the great, you know, outdoor weather. So it really just culminated into that that real connection, I think, that people had and just kept growing from there."

In 1946, a ticketing scandal unfolded when 26,000 tickets were sold for the Big Thursday game against Clemson, along with 10,000 fake tickets manufactured by some nefarious person. The stadium filled up with fans — some with real tickets and some with fake tickets — and admission gates were closed. Ticket-holding fans who were locked out tore down the gates so that they could watch the game from the sidelines.

By the early 1950s, Carolina Stadium added floodlights to accommodate the next new-fangled technology — television — which started broadcasting the games. I think it’s interesting that the University of South Carolina — unlike a lot of other schools at the time — was not afraid of losing ticket revenue because of television coverage. Athletics officials here believed that TV exposure would build their fanbase even more, and it turns out they were right.

Paul Dietzel, who had won a national championship at LSU, was hired as the head football coach in the mid 1960s, and the 1968 football season was a sellout in the stadium, which by then held 43,000 fans. Carolina Stadium expansion fever was rising.

Elizabeth West:  "… You get more TV deals, you get more broadcast, you get more coverage, more fans coming in. You also have an increase in the number of alumni because the university was growing its student population and had had a tremendous jump in enrollment in the ‘60s and ‘70s. So you have to accommodate more people. And that was really the springboard into, you  know, a major stadium."

The funds for the stadium helped raise the capacity to 54,000 seats by constructing an upper deck on the west side. A decade later, in 1982, an upper deck was added to the east side of the stadium and fans, mostly students, noticed that if they jumped up and down enough, they could actually make the upper deck sway. There was a popular bumper sticker back then that read “If it ain’t swaying, we ain’t playing!”

Giant shock absorbers were added to the east upper deck in 1987 to tone down some of the sway. It was around that time that the Marching Band was ordered to stop playing “Louie, Louie,” the old song by the Kingsmen that got fans on their feet and dancing and which sometimes sent vibrating ripples through the stadium, which now accommodates just over 80,000 fans.

There are newer and bigger college football stadiums out there, but there’s only one Willy B. And from its humble beginnings, it has become one of the loudest and most spirited football venues in the country.

That’s all for this episode. Next time, we’ll look back 50 years to a historic Student Government election that generated national headlines. Remembering the Days is produced by Communications and Public Affairs at the University of South Carolina. I’m Chris Horn, thanks for listening and forever to thee.

For more information: Chad Seifried, the L.M. "Pat" and Mildred Harrison Endowed Professor of Sport Management at Louisiana State University, and Clay Bolton, assistant professor of sport and recreation management at Texas A&M University at Commerce, have written a detailed history of the University of South Carolina's football fields and stadium. That paper was a valuable source of information for this episode of Remembering the Days.