Remembering the Days: What's in a name?

Since its inception more than 200 years ago, the University of South Carolina has had, at various times, three different official names and several nicknames. But Juliet was right when she said that a rose by another name would smell as sweet — a sentiment that might even apply to universities.

"What's in a name?
That which we call a rose
By any other name would smell as sweet.”

Juliet addressed those Shakespearean words to Romeo more than 400 years ago, and they still ring true. Names and nicknames don’t matter nearly so much as our feelings for the people to whom the names are attached. That same sentiment might even apply to universities.

I’m Chris Horn, your host for Remembering the Days, and today we’re considering the many names and nicknames of the University of South Carolina, past and present. It’s a stroll down memory lane that will take us back to 1801 and all the way up to the present.

When the Reconstruction era came to a close in the late 1870s, there was a lot of politicking about what the university should offer its students. Should it remain an institution of classical education as it had been or should it become a more applied place of learning, more like today’s technical colleges? The latter side won out, and in 1880, we became the South Carolina College of Agriculture and Mechanic Arts. That’s right — we had a 20-acre college farm here on campus and offered courses in experimental agriculture nine years before our orange-hued breathren in the northwest corner of the state had even opened their doors. 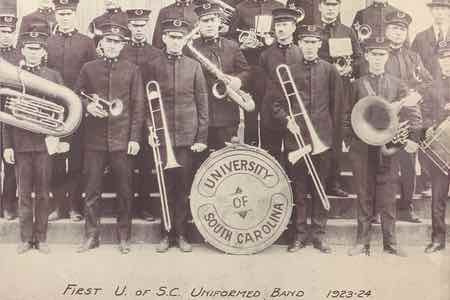 The University of South Carolina Marching Band had room for the university's full name on its drum in 1923. But the person who captioned the image back then took a page from the university's 21st century social media playbook by using a shortened version of the name.

But not everyone uses the full formal name. A lot of alumni refer to their alma mater as ‘Carolina’ or ‘USC.’ If we’re talking sports, we might just say “the Gamecocks.”

I spoke to Eric Nichols, the marketing director for Gamecock Athletics, and as you might imagine, he’s pretty keen on people not confusing us with any other collegiate sports team in the country. That’s why the athletics department doesn’t officially recognize or use ‘USC’ on athletes’ uniforms.

Eric Nichols: “The rationale is we want to be clear about our identity, who we are. We’re South Carolina, we’re Carolina. Of course, we all casually refer to ourselves as USC around campus, but it’s important that when we’re thinking about our uniforms, which is our most visible brand attribute that’s seen nationally and many times globally, we want to be sure that we communicate effectively who we are.”

That reminds me of a short-lived campaign in the 1980s that attempted to brand this university as “The USC.” There was official stationery emblazoned with that moniker, and we even painted ‘The USC’ on the brick smokestack in the middle of campus. It was sort of a tongue-in-cheek way of signaling that the University of Southern California had nothing on us, but “The USC” never gained much traction and the “The” on the smokestack was eventually scraped off.

The Athletics Department does use ‘Carolina’ on some uniforms and other approved licensed gear. I guess there’s not as much concern about the nickname ‘Carolina’ being confused with the University of North Carolina, which a lot of people outside of South Carolina associate with the Tarheels in Chapel Hill.

When Gamecocks sports are covered by ESPN or other networks, we’re typically listed as ‘S DOT Carolina’ or just ‘SC’ in the onscreen score box. That’s straightforward, I think — there’s just one state in the nation with that abbreviation, and we’re the flagship university of that state.

Several years ago, some TV networks would abbreviate our name to S C-A-R or S-CAR — the CAR a kind of shorthand for Carolina — but that unfortunate abbreviation reads like ‘SCAR." Eric was not a happy marketing director whenever he saw SCAR on his TV screen, but those networks got the memo and it doesn’t happen much anymore.

For more than a decade, the university has been using ‘UofSC’ in social media handles and hashtags, and that abbreviation has caught on well in the digital realm.

I was curious to know what today’s students call the university so I set out across campus on a fact-finding, well, name-finding mission.  I asked a bunch of incoming freshmen from all over the country what they said to friends and family who asked where they were going to school. Here’s what they said:

Sophia Piscitell, “So I since I'm from Connecticut, I have to say UofSC. But I tell people that I'm going to USC everywhere else. Up in Connecticut, especially where I'm from, people get confused, and they think I'm going to Southern California. So I have to do the 'of' to specify.”

Miller Gaebe, “I say South Carolina. I started calling it USC also. So, like my family, I say USC whenever I'm referring to it, but I usually say I'm going to South Carolina, the University of South Carolina.”

Kennedy Young, “I say USC and then sometimes people are like, oh, University of Southern California? And I'm, like, ‘No, South Carolina.’ ”

I also asked these students why they chose the University of South Carolina, and it was clear that had nothing to with our name or our various nicknames. Many of them came here to tour the campus, marveled at the Horseshoe, saw a world of opportunity, and fell in love with their new home away from home. Juliet was right — a rose — or a campus — by any other name would smell as sweet.

We’ve got lots of good stories to tell this season on Remembering the Days, and next time, just in time for the start of football, we’re going to trace the evolution of the university’s football fields and stadiums since the 1890s when the pigskin sport first took hold here.

Remembering the Days is produced by the Division of Communications and Public Affairs at the University of South Carolina. I’m Chris Horn, thanks for listening and forever to thee.