They were buggy, hot and tiny. But University Terrace Apartments were perfect for married couples who needed a cheap place to live on campus.

Obviously, the stories are apocryphal …

… but people who lived in a certain apartment complex on campus back in the day swear — tongue in cheek — that the cockroaches there were big enough to ride.

I’m Chris Horn, your host for Remembering the Days, and today we’re revisiting the University Terrace Apartments, a 74-unit complex that was home for married students — and a lot of big nasty bugs — at the University of South Carolina for nearly 40 years.

If you were a student here in the early 1990s or before, you might remember University Terrace. The low-slung buildings had been built during the Great Depression as federally subsidized housing for the city of Columbia, and they were situated on a slope facing Blossom Street, behind the Russell House and the Thomson Student Health Center. The Bull Street university parking garage is there now.

The university acquired the complex from the Columbia Housing Authority in the late 1950s and early ‘60s and initially used it to house male freshmen. The apartments were soon converted to married student housing as South Carolina began attracting more students, many of whom were married and wanted to live on campus. 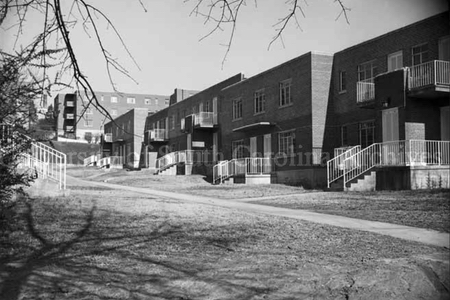 University Terrace Apartments were not specimens of architectural splendor. But for married students who wanted to live on campus, the rent was cheap and the location was perfect. Photo from University Librararies Digital Collections.

Among them were Joe and Missie Walker, two undergraduates who both hailed from Aiken, South Carolina.

Missie Walker: "What was it, maybe 500 square feet in our apartment, 600 at the most. The whole apartment would have fit in this room and you could stand anywhere in that apartment and see every room. We had no closet, right. The bathtub was not a full size bathtub. So you had to sit like knees up under your chin. No shower. It was a second-story apartment. It was a flat tar roof and cement walls with plaster on them. And the heat just — it was like living in an oven. They weren't air conditioned."

That’s Missie Sanders Walker who lived with her husband, Joe, in University Terrace from January 1978 through the summer of 1981. They got married just a few months before graduating with bachelor’s degrees in ’78, and Joe went on to earn a law degree in 1981. Looking back 40 years, they chuckle at the size of their first humble abode as a married couple. To hear them describe the place, it was like they were living in a tiny house before tiny houses were a thing.

Missie Walker: "The kitchen — the stove was so small. I didn't know that they made them that small. You couldn't put two pots on top of the stove side by side. They just — it wouldn't fit. You couldn't put certain baking dishes in the oven because it was too small. No dishwasher. The hot water heater was — it took up half of my kitchen."

The Walkers tried to sweat it out that first summer, but it was just too much with the sun’s rays penetrating the flat tar roof and turning the cement walls into a virtual oven. Here’s Joe Walker:

Joe and Missie Walker: "And we made it one month into the summer because — Missie and I were talking about this the other day — we used to go to Thomas Cooper and stay in Cooper until it closed. And it was air conditioned. Because we couldn't stand to be in the apartment. For Missie's birthday, that July 1st, Missie's dad bought us an air conditioner, and we put that in and then we were able to survive but it wouldn't reach back to the bedroom. So we would spend most of the summers sleeping on the couch in the living room.

"I’m sure people lived in a lot worse — it would have been impossible without the air conditioner. That was the only thing. And then what I can't get over that was we managed with the — you know, today everybody's got more bathrooms than bedrooms and that tiny bathroom without a shower.

"We would go down to the P.E. center and get our showers down there and then come back up, especially in the summer, because if you just couldn't sit in the bathtub, I had long hair when we got married and ended up having to cut it because to wash my hair, put my head underneath the faucet in the bathtub just didn't work."

But what about those roaches? Surely, that was something they couldn’t put up with?

Joe and Missy Walker: "We had roaches that were, you know, you could ride them! We had names for our roaches! (laughter) They would just come and visit at night. You knew in the morning you had to cut all the lights on before you got out of bed because you would have so many bugs."

The Walkers would call University Housing to come out and spray, and they always did, but the dead and dying cockroaches just made way for another wave of roaches that would show up as uninvited house guests and overstay their welcome.

Joe Walker: "We just got kind of used to it. But my parents would come up and they would be like, 'Do you realize a roach just walked across the table?' And we thought, well, yeah, but he was there yesterday and he'll probably be gone next week.

One thing that Missie Walker could not and would not put up with were the wild colors that the previous tenants of her apartment had painted the walls.

Missy Walker: "We had asked the university if we could go look at the apartment before we moved in and they said that was fine and that the people who were moving out, they were moving out the day we went over to look at the apartment. And you could stand anywhere in that apartment and see all four rooms, the bathroom, the bedroom, the kitchen and the living area. And they had painted them. The living area was bright orange. I mean, neon orange. The kitchen was green, the bedroom was yellow and the bathroom was blue. And these were bright colors. So we went back to the university to ask for another apartment. And they said, ‘No, that's the only one coming up. But it's scheduled to be painted. And if you don't like those colors that are in there, we can come and paint, but it'll be several weeks,’ and we said 'No, if you give us the paint, we'll paint it.' So we had a big painting party and all of our friends came and they brought brushes and rollers and. Yeah, and the university supplied the paint and we supplied the people and we got it painted and then we moved in."

University Terrace Apartments were tiny, they were blazing hot in the summer unless you had an air conditioner and, as we’ve already discussed, they were crawling with bugs.

So … what was the upside of living there? Simple — the rent was cheap and the location was good.

Missie and Joe Walker: "That was the cheapest and that's what we could afford. And I think our first rent was $60 a month and that was all inclusive. And if you ended up getting a refrigerator, I mean an air conditioner, then your rent went up by like five dollars for every month during the summer you ran your air conditioner, which was obviously well worth it.

"I never thought of it as a trial or, you know, you’d rather live someplace nice, but all in all, it had its benefits. I mean, as I said it was close to everything and and it was economical and, you know, it was reliable."

The Walkers still have faded photographs of their time at University Terrace — one shows the snowstorm of 1978, another captures the view from their window of a little patch of grass.

And on the shelf in the spacious den of their beautiful home near Lake Murray is one more memento of their time at UT. It’s a brick, which Missie insisted that Joe retrieve from the demolition site when the apartments were torn down in the mid-1990s. Perhaps that brick reminds them of their humble start as a couple and the minor, but myriad, discomforts they endured in those lean, early years of marriage. Or maybe it’s just one brick on the path of the Walkers’ own memory lane.

That’s all for this episode. I would be remiss if I didn’t point out that University Terrace wasn’t the only place on campus for married couples who, after 1963, also lived in Carolina Gardens and, after 1974, in Cliff Apartments. With an abundance of private apartments near campus these days, the university no longer offers married student housing — the top priority is housing each year’s freshman class.

On the next Remembering the Days we’re going way back to 1897 when the state Legislature passed a law banning fraternities and sororities on campus. We’ll find out why that law was passed and what happened when the ban went into effect.

Remembering the Days is produced by the Office of Communications and Public Affairs. I’m Chris Horn, thanks for listening and forever to thee.