Remembering the Days: A natural history stroll across campus

Were there always so many squirrels on the Horseshoe? And how else has campus changed in the past 200 years in regards to insects, birds, snakes and such? Take a stroll with university naturalist-in-residence Rudy Mancke to learn what's changed and still changing in the natural world of campus.

The other day I was sitting on a bench on the historic Horseshoe — a beautiful fall afternoon, brilliant blue sky. And, I’m not kidding, I spotted more than a dozen squirrels from where I was  sitting — everywhere I looked there were squirrels, a squirrel metropolis.

Which got me thinking — have there always been this many squirrels on the Horseshoe? And, for that matter, what else has changed on this campus in the past couple of hundred years in regards to insects, birds and snakes? 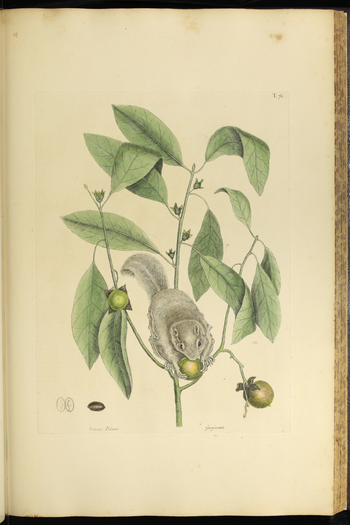 English naturalist Mark Catesby painted this specimen of a gray squirrel while traveling through the backwoods of South Carolina in the early 1700s. Check out the University Libraries Mark Catesby digital exhibit from the link near the bottom of the page.

I’m Chris Horn, your host for Remembering the Days, and today we’re talking about the natural history of the University of South Carolina campus. The man with the answers is Rudy Mancke, the naturalist-in-residence for the School of the Earth, Ocean and Environment here. You might remember Rudy from the long-running PBS show called Nature Scene, in which he tromped through the woods all over South Carolina and across the country, describing every plant and critter that he came across.

I met with him one morning on the Horseshoe for — let’s call it a natural history stroll. First, I asked him about the squirrel population, what it might have been like on campus 200 years ago when the area was brushy and more densely wooded.

Rudy says that habitat probably held far more predators — more foxes and snakes, for example — so quite probably there were fewer squirrels. As time went by, the city surrounding the campus became more developed and less hospitable to the predators, and that resulted in … more squirrels.

But in nature, the situation is always changing. Rudy says a predator that used to be wary of humans has re-emerged on the campus in the past few decades or so.

Rudy Mancke: “Since the early 1800s, I think behavior of certain birds has changed because of human activity. And one of them is the red-tailed hawk, which now nests, you know, in downtown Columbia.

“If you're a red tailed hawk, it took them a long time to get used to people — they had to get used to large animals walking around. Once they were used to them, the population of squirrels began to diminish.

“Red tailed hawks — oh man, it's a smorgasbord. It really is. And when you've got human beings walking around, the gray squirrels get used to them. So they're not afraid or they're not looking over their shoulder. Oh, boy, if you're a predator, this is going to be a heavenly place to live if you're feeding on squirrels and a number of birds do that.”

Now, this next part is kind of gross, but that’s how Rudy Mancke rolls. He doesn’t sugarcoat anything about life and death in the natural world.

Rudy Mancke: “They don't eat the whole squirrel. They eat most of the fleshy parts and internal organs, but never stomachs. I find squirrels stomachs on the Horseshoe. People have found them and asked me, ‘What in the world?’ Squirrels are eating things that are very bitter. These hawks have been taking squirrels so long they realize, ‘I don't want that part,’ and they leave it.”

OK, that’s all I want to hear about squirrel stomachs. I asked Rudy how bird and insect populations on campus might have changed over time.

Rudy Mancke: “The world's changing climate seems to be warming up. We're getting a lot of species that really were more southern species that are moving, you know, farther north because of changing climate. We've got butterflies and dragonflies that we never used to see this far inland that are now here. There's some birds that are actually staying now, goldfinches more than they ever have. Scarlet Tanagers, they're stopping here instead of going farther north, which is very interesting. So that's one of the nice things about a campus that leaves the natural world as natural as you possibly can. You can see those changes. And that's fun.”

I also asked Rudy about snakes on campus — were there more of them slithering around in the 19th century? He says the population of timber rattlesnakes in the downtown area is much diminished. But poisonous copperheads and other garden-variety snakes? They’re still going strong. 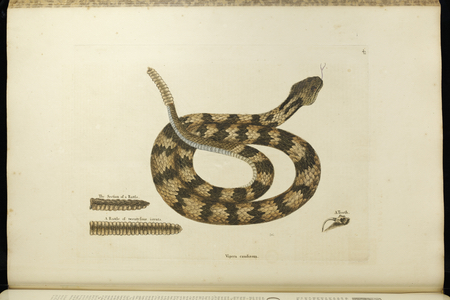 Naturalist Mark Catesby also managed to paint this lively rattlesnake, a species that would have been at home on the campus of South Carolina College in the institution's early years.

Rudy Mancke: “Copperheads in downtown Columbia,  I mean, I get them all the time. Rattlesnakes, not as common as they used to be. They were killed, I think pretty rapidly, the timber rattlesnakes. But smaller snakes, you know, the little backyard snakes that go around are in a lot of people's backyards. They rarely get a foot in length. They're not noticeable unless you happen to rake leaves that they're hiding in, and they're no problem to the people at all. But the mix of things that you can see on a campus like this that has added vegetation — that enhances the diversity, a great variety of habitats.”

On our walk, Rudy pointed out other natural history aspects of campus, including the original campus wall. You might remember an episode we did called the Great Wall of Carolina that explains why the wall was built. As a naturalist, Rudy is not only interested in the material those campus wall bricks are made from but also what grows out of the cracks and crevices of the wall itself.

Rudy Mancke: “If you've got a lot of red clay soils, which are common in the Piedmont all the way down to this part of the state, then you make bricks out of those and use them for brick walls. And when you build a brick wall, you've got all those little spaces, you know, where the mortar goes. And that allows some very interesting little ferns to come in that would not normally be there and changes the environment, creates a lot of micro habitats, they're called, maybe for plants and animals that couldn't live there otherwise.”

If all this talk of ferns and birds and squirrels on campus has primed you for a visit, you’re always welcome to stroll through the urban forest that is the university campus. You might spot one of those red-tailed hawks or maybe even a bird or bug you’ve never seen before. You’re absolutely guaranteed to see a squirrel.

If you can’t come to campus to scratch your natural history itch, the campus can come to you. University Libraries is now home to the Catesby Centre, named for the English naturalist and explorer who tromped through the backwoods of South Carolina in the early 1700s. Check out the show notes for this episode to find beautiful images of animals, fish and plants that Catesby painted during his four-year expedition in the Carolinas and the Bahamas. There’s also a link to a digital Catesby exhibit that might whet your appetite for natural history even more.

That’s all for this episode. Next time, I’m going to introduce you to a long-gone but not forgotten professor who taught at South Carolina for nearly 40 years and whose personality became the stuff of campus legend. Remembering the Days is a production of Communications and Public Affairs at the University of South Carolina. I’m Chris Horn, thanks for listening and forever to thee.