He taught English courses at the University of South Carolina for nearly 40 years and became a beloved professor, but Havilah Babcock was known by many readers outside of the Palmetto State for his entertaining short stories about fly fishing and bird hunting.

“Whenever I need a psychiatrist, I go fly fishing, holding a boat to be superior to a couch any day of the week. A fly rod is good for whatever ails a man … it is especially recommended for ulcers, nervous breakdowns, and overdoses of wedlock.” — Havilah Babcock

When he wasn’t fly fishing or bird hunting, the man who penned those words more than 50 years ago was in the classroom, a favorite English professor for generations of students at the University of South Carolina.

I’m Chris Horn, your host for Remembering the Days, and today we’re looking back at Havilah or as some might say it Ha-VEE-lah Babcock, whose long teaching career at the university won the hearts of many students — and the admiration of outdoor enthusiasts across the country who were entertained by his lively tales of hunting and fishing. 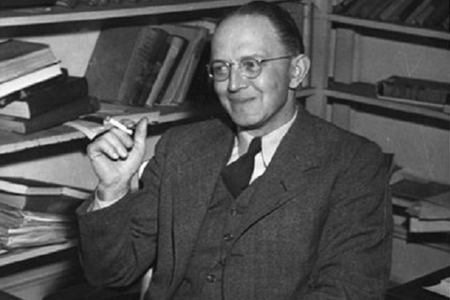 Havilah Babcock was a fixture in the English department from the late 1920s until his death in 1964. First editions of some of his books have become valuable colletors' items.

Babcock taught at South Carolina from 1927 until his death in 1964, and many students from those years recall the animated professor who broadened their vocabularies in English 129, a course that came to be known as “I Want a Word.” Babcock would often begin each classroom session by saying something like “I want a word that means ‘secretary,’ ” and, if the students had diligently studied their workbooks, they would know he was looking for the word ‘amanuensis’, a fancy term for an assistant.

But Havilah Babcock’s “I Want a Word” course was much more than merely teaching students to use 25-cent words. He broadened their vocabularies for sure, but he also genuinely liked his students and tried to engage with them in fun ways. His granddaughter Barbara Babcock Weston remembered that her grandfather would give the students a daily quiz and whoever had the lowest score was sent the the campus canteen to get a chocolate milkshake for the professor. Students appreciated the opportunity to enrich themselves when Babcock would announce “I’ll give a quarter to anyone who can spell —” and it would be some multisyllabic word on their vocabulary list.

One student from the 1930s remembered Babcock as a marvelous storyteller who forewarned the class at the beginning of the semester, saying "My digressions are going to be a lot more interesting than anything else."

It was during the 1930s that the young English professor rallied students to help lay bricks on the Horseshoe pathways, solving the perennial problem of the alternately dusty and muddy trails that criss-crossed the central campus. You can learn more about that project on an episode called “Paving the Horseshoe Pathways.” As the years went by, Babcock, who headed the English department, committed it to a high level of teaching excellence and mentored many a student in the art of clear, descriptive writing.

But there was one thing that Babcock loved at least as much as teaching and writing, and at certain times of the year even moreso — that was bird hunting.

There’s a story that Babcock’s secretary — pardon me, his amanuensis — once posted a notice to the students that read “Dr. Babcock will be sick all next week.” She was not clairvoyant — she just realized the next week was the start of quail hunting season, and the erudite English professor would not be able to resist the call of the wild.

There’s another story that Babcock decided to cancel his afternoon class one fine autumn day to go bird hunting. He wrote on the chalkboard in large letters, “Dr. Babcock will not meet his classes today.”

He left the building and returned a few minutes later, having forgotten something in his desk, and noticed that a clever student had erased the letter ‘c’ from ‘classes’ so that the chalkboard message now read, “Dr. Babcock will not meet his ‘lasses’ today.”

Upon reading that, Babcock did the student one better. He erased the ‘l’ from ‘lasses’ so that it read “Dr. Babcock will not meet his a — well, you get the idea.

John Wertz graduated from the university in 1966 and had the good fortune of taking Babcock’s “I Want a Word” course the last semester it was taught.

John Wertz: “Well, I'd heard a lot about his courses and particularly that one, "I Want a Word." And so I decided I would try to sign up for it.”

Wertz had a student position in the Russell House at the time, and that gave him the opportunity to register a day earlier than the rest of the student body. He didn’t know there was a waiting list to get into "I Want a Word" — that’s how popular a professor Havilah Babcock had become.

John Wertz: "I wasn't supposed to be in there, but somehow or another because I registered the day earlier and they didn't realize it they put me in the class. So that's how I ended up in Dr. Babcock's class."

Wertz doesn’t remember too much about the course itself, but Professor Babcock, he says, was unforgettable.

John Wertz: "I remember more about Dr. Babcock and the relationship with him because he was always friendly. He was always sharing with you and he would always talk to you, you know, see him in the hallway. Once he got to know me, he would always talk, and he'd ask about different things, and he would talk about hunting even though I knew nothing about it, and to be honest with you, you know, I wasn't really that interested in it but he was so enthusiastic that you would want to listen to him."

Babcock channeled his enthusiasm for hunting and fishing into engaging stories that appeared in magazines like Field & Stream and Sports Afield. His tales were also collected into books with such titles as My Health is Better in November, Tales of Quails ‘n Such, Jaybirds Go to Hell on Friday and I Don’t Want to Shoot an Elephant. First edition copies of some of those titles now fetch hundreds of dollars in the collectible book market.

Babcock retired from the university in 1964 and passed away in December the same year. It’s interesting to note that many of his former students, before they died, arranged for their obituaries to note that they had graduated from the University of South Carolina having taken English 129 with Professor Havilah Babcock.

Here’s one last little-known fact about Havilah Babcock. He and his wife, Alice, were fond of camellia bushes, and they cultivated quite a few of them in their yard just a few miles from campus. After the Babcocks had passed away, the university was able to transplant some of their beloved camellias to campus — you’ll find them planted beside Hamilton College near Pendleton Street. If you ever have an opportunity to see those camellia bushes, you could do this in honor of Havilah Babcock’s "I Want a Word" course — think of the French word trouvaille (tru-vi-yuh). It means something lovely discovered by chance.

That’s all for this episode. If you had a beloved professor at Carolina that you think would make an interesting story, send me an email at chorn@sc.edu. We’ll add it to the list of future episodes.

Next time on Remembering the Days, we’ll look back at the long list of famous visitors to the University of South Carolina — from John F. Kennedy to Pope John Paul II and many more. This podcast is produced by the Office of Communications and Public Affairs. I’m Chris Horn — thanks for listening and forever to thee.