Remembering the Days: 'JFK slept here' and other famous visitors

JFK once had a bad night's rest in the President's House, and Burt Bacharach tickled the ivories there. Pope John Paul II addressed a crowd of thousands packed onto the Horseshoe. This trip down memory lane has us remembering some of the famous visitors who've come to campus over the years.

Have you ever known someone who likes to name drop?

“You’ll never believe who I ran into today in the grocery store — Darius Rucker, and he was telling me all about the latest tour.”

You know, people who are always making references to celebrities or famous people?

"My best friend’s sister was at a Rolling Stones concert, and Mick Jagger signed her blue jeans with a Sharpie."

I’m Chris Horn, your host for Remembering the Days, and today I’m going to be name dropping a lot because this episode is about famous people who have visited the University of South Carolina campus.

Chances are you might have been on campus when some of these folks were here. A lot of our famous visitors have shown up during commencement exercises.

For example, several presidents of the United States, including George H.W. Bush, George W. Bush and Ronald Reagan, have come to our campus to proffer their sage advice to graduating seniors. Gerald Ford, who had played college football in his younger days, visited Williams-Brice Stadium in 1976 during a football game, but I don’t think he had any advice for the Gamecocks. We lost that game to Notre Dame. 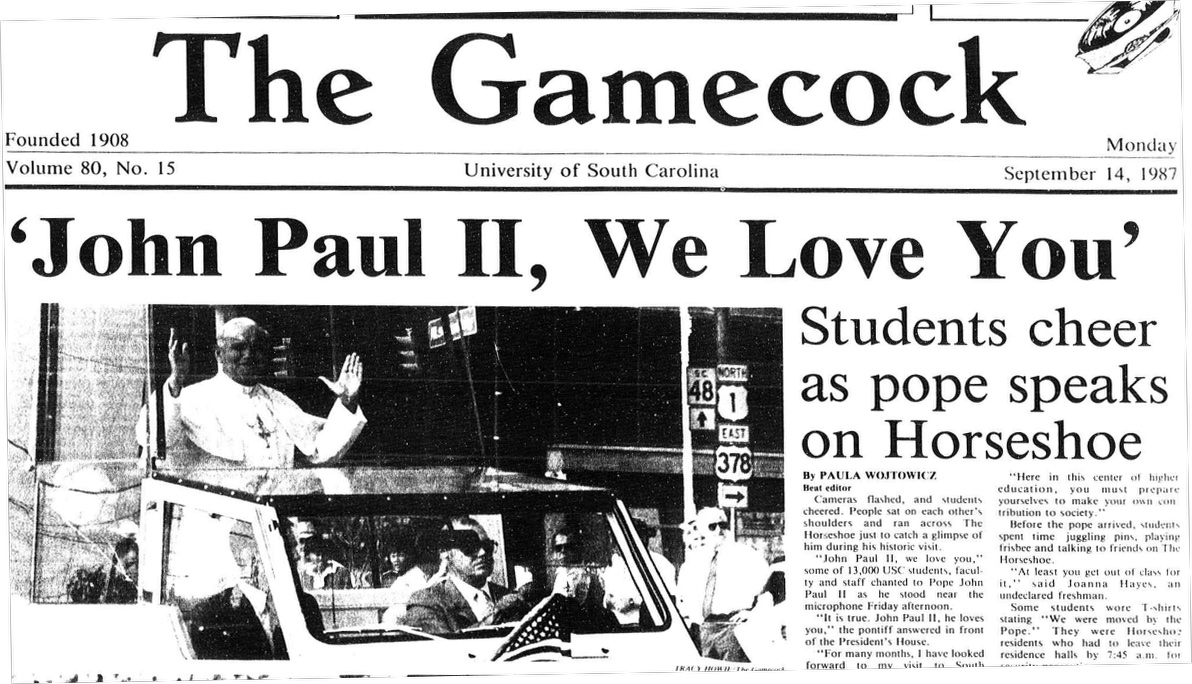 Bill Clinton came in 2018 to attend the opening of the Dick Riley political collection in the library here. Joe Biden was the commencement speaker in 2014 when he was the country’s vice president.

John F. Kennedy came to campus in 1957 when he was still a U.S. senator, three years before he was elected president of the country. He was the university’s commencement speaker that spring, and he slept in the President’s House on the Horseshoe the night before (read the text of John F. Kennedy's 1957 speech on the Horseshoe). Patricia Moore-Pastides, the university’s first lady, told me a story about Kennedy’s overnight visit, which required some special preparation by Virginia Russell, the wife of then-university president Donald Russell.

Patricia Moore-Pastides: “And he was invited to give the commencement address, and the commencement was held on the Horseshoe. So he was going to stay in the president's house and Mrs. Russell knew that he had a bad back. And so she wanted to find out how she could make his stay more comfortable. And he said, ‘Well, if you could get a piece of plywood to stick under the mattress, I need something kind of firm.’ So she spent the morning at facilities and she had them bring up three different thicknesses of plywood, and she settled on the thickest one. I think it was three quarter inch or something. And she got them to put that under the bed for him so that he could be comfortable when he slept there. But then apparently the following morning, the housekeeper came down and told Mrs. Russell that he had not slept on the bed at all. All the bedding was on the floor. So he actually had to sleep on the hard floor instead of on the bed.”

Speaking of presidents and supreme court justices, William Howard Taft, the 27th president of the United States, was the only president who went on to serve as a U.S. Supreme Court justice. Taft paid a visit to the Horseshoe in 1909, just after he was elected president.

Famous actors from back in the day have made curtain calls here, including Jimmy Stewart, Cicely Tyson, Richard Thomas — you know, John Boy from The Waltons — Eva Marie Saint, Helen Hayes and Pearl Bailey. We’ve also had some well-known writers — people like Kurt Vonnegut, Maya Angelou, Alex Haley and David McCullough, Josephine Humphreys, Ray Bradbury and Pat Conroy. There are plenty more but I’ll stop there — the list of writers who come here to talk about their books and chat with students grows longer every year.

In 1987, the university was the host site for an ecumenical conference that brought several notable religious leaders to campus, including Billy Graham and Pope John Paul II. The pope rode in the famous popemobile around the Horseshoe driveway to the President’s House where he uttered these words to thousands of Carolina students:

That was a seminal moment in the history of the university, but there was also a little humor that day. All of the students who lived on the Horseshoe had to vacate their dorm rooms overnight as part of security precautions for Pope John Paul’s visit. Some of those students showed up on the Horseshoe during the pope’s appearance with T-shirts that read: “I was moved by the pope.” Clever.

A few famous news personalities have stopped in at Carolina, including Walter Cronkite, Cokie Roberts, Ted Koppel and, from PBS, Robin MacNeil and Jim Lehrer of the MacNeil-Lehrer Newshour. And, speaking of old TV shows on PBS, Mr. Fred Rogers visited our campus neighborhood about 30 years ago.

Some notable athletes have spent time here as well. Long before he was named the Gamecocks head football coach in 1982, Joe Morrison had played 14 years in the NFL with the New York Giants who retired his jersey number. Tennis great Arthur Ashe served up a visit, and who can forget our home-grown sports celebrities George Rogers, who won the 1980 Heisman Trophy, and Alex English, the NBA hall-of-famer?

Let’s end this on a high note or at least a musical one. We sort of mentioned Darius Rucker at the very beginning. He and the other Hootie and the Blowfish band members were all students here before they hit it big. Musicians who have visited campus after they were famous include Dizzie Gillespie, Andrew Lloyd Webber and Burt Bacharach, the prolific songwriter and pianist whose career started in the 1950s and is still going. Patricia Moore-Pastides told me a story about Bacharach who visited the President’s House a few years ago when his daughter Raleigh was a freshman student here.

Patricia Moore-Pastides: “Burt Bacharach sat on the couches with us, and we just chatted and his daughter was a student here. She was an equestrian. And I remember saying to him — he had his coat on and he was getting ready to leave — and I said, you know, they always say Andrew Lloyd Webber played this piano. And he kind of rolled his eyes, and I said, ‘Well, you know, you can change all of that if you'd like to play the piano.’ And so he sat right down with his jacket on and all and he played 'This guy's in love,' and sang it for his daughter. And it was so touching, you know, and that was when she was a freshman. And then he came back for his honorary degree when she was a senior, when she was graduating.”

It probably sounds corny to say this, but I’ll say it anyway. For all of the famous people who have visited the University of South Carolina — and I’m sure that a listener is going to remind me of some notable names that I’ve left out — the most important people to come here have been the students. There are more than 300,000 living alumni now and who knows how many have passed through this campus in years gone by. If it weren’t for those students — and perhaps you were one of them — there wouldn’t have been a university campus for all of those famous people to visit. So, thank you for coming here and helping to make this a great university.

That’s all for this episode. The spring 2022 season of Remembering the Days begins next month, but we have one more show this fall, and it’s about a famous incident you might have heard of — the Great Biscuit Rebellion. Find out why the biscuits were actually not great at all.

Remembering the Days is produced by the Office of Communications and Public Affairs. I’m Chris Horn, thanks for listening and forever to thee.