Remembering the Days: The lecture hall that never was

Intended as a large lecture hall when it was built in 1855, the building we now know as Longstreet Theater never lived up to its intended purpose. Poor acoustics turned it into an echo chamber that was ill-suited for almost any academic purpose. But an engineering miracle in the 1970s transformed the building into a premier stage for live theater.

Distinguished guests, faculty members and students. We have gathered on this auspicious day to celebrate our new College Hall ...

On April 22, 1855, James Thornwell, president of South Carolina College, delivered a speech inside the college’s newest building. The exterior of College Hall, as it was called, was magnificent, a neoclassical design that resembled an ancient Greek temple. It was built in the middle of Sumter Street — the road split on either side of it so that everyone riding by in their carriages could fully appreciate the grandeur of its exterior. The interior of the building was another story, though. The acoustics were so bad, no one could hear clearly what was being said from the podium. 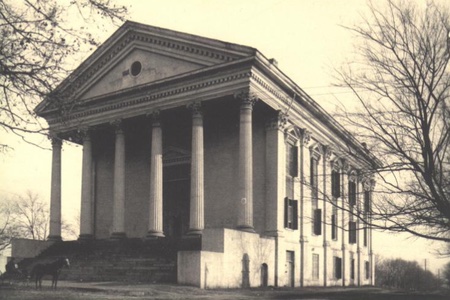 Longstreet Theater, circa 1900, when it was the university gymnasium. Originally built as a lecture hall, the building's poor acoustics thwarted that purpose.

I’m Chris Horn, your host for Remembering the Days, and today we’re taking a closer look at one of the most iconic buildings on the University of South Carolina campus. We know it now as Longstreet Theater, and it’s a building whose story begins in frustration and disappointment but ends in triumph, thanks to a big dose of modern technology.

Here’s a little background. The trustees of South Carolina College wanted a bigger chapel, a place where lectures could be delivered to large audiences, a place big enough to accommodate the college’s commencement ceremonies.

The foundation was laid in 1852, but trouble began soon after. 400,000 bricks designated for the building were lost when the Congaree River flooded, and the building contractor had trouble obtaining glass for the windows and other materials for construction. The college’s trustees worried that the building would not be completed in time for the annual December graduation ceremony in 1853.

In fact, when James Thornwell, president of the college, delivered his reverberating speech in spring 1855, the building still wasn’t completely finished. The original contractors had gone bankrupt, and another firm had to come in to finish the work.

The long and short of it was that the building almost seemed to be cursed. Storms blew off the metal roof panels twice during construction. And the building’s intended purpose as a lecture hall was completely thwarted by its horrible acoustics. Contractors tried all sorts of remedies, adding carpets and drapes and stuffing moss and even hair between the floor boards to try to improve the sound. None of it worked. The building’s problems were temporarily forgotten when the Civil War broke out. 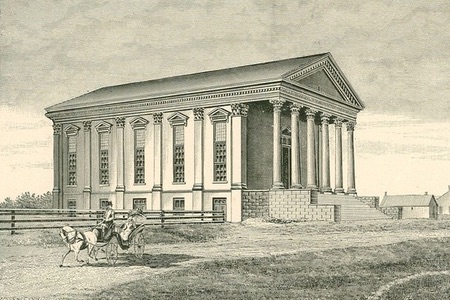 An illustration from about 1860 shows a building that has changed very little in the past 160-plus years.

Here’s Jim Hunter, the head of the Department of Theatre and Dance, which now occupies the building.

Jim Hunter: "It was originally thought to be an enormous advantage to the campus to have such a large auditorium space, right?, a meeting hall chapel. And it was just really quite a disaster. And they even, I think the Legislature met in here for a few sessions and they moved out. And so it sat empty some. And of course, there's the famous story of how Longstreet was a garrison, you know, the union soldiers camped out where the reflecting pond is now because it was a field right next to the front of where the Cooper Library is now. And so this was a garrison and they had a hospital in here. And of course, the famous stories of the catacombs, which are down underneath the front steps that you see when you go by. There's there are these brick catacombs down there. Those were the morgues because it was cold down there. And of course, there's all the ghost stories that you get from that. We've actually had the Ghost Hunters TV show here shooting overnight. This was quite a few many years ago. And of course, you know, they heard things, of course."

As Jim mentioned, the state legislature tried to meet in the building just after the Civil War to draft a new constitution for the state of South Carolina, but they encountered the same acoustical problems — no one could understand who was talking or what the speaker was even saying. So, they found another place to legislate. From 1870 to 1887, the building was used as an armory, and the college even thought about selling it but nothing came of that plan. At any rate, college officials had given up on the idea of the building ever being used for a lecture hall because in 1888, they divided up its interior into dozens of classrooms and laboratories.

The basement became a student gymnasium in 1893 and by the early 1900s, the entire building had become the university gym.

Jim Hunter: "But of course, even then the noise we're all used to sort of gyms had all that noise and reflection. But even then, the acoustics were noticeably annoying, I guess, disruptive to the activities."

In the late 1930s, the federal government provided funds to build an indoor swimming pool just behind the building. That swimming pool would be used by students until the early 1970s when the Blatt P.E. Center was built.

And that brings us to the point in time in which College Hall became Longstreet Theater, the point when the building, 120 years after its construction, finally was used for something closer to its original purpose.

Hal Brunton, who was then vice president of university operations, had considered tearing the building down because it was in such a state of disrepair. But then he came up with a plan to renovate it for the theater department, which had begun in 1974 and needed office and production space. Now, you might be thinking, How in the world could this building plagued by acoustical problems be used to stage live theater? Wasn’t that just asking for more trouble?

A South Carolina contractor experienced in theatre construction was hired, and a renowned theatre designer named George Izenhour was brought in. To fix the building’s poor acoustics, Izenhour had the contractor build an upside down, dome-shaped structure made of plaster and suspended from the ceiling.

Jim Hunter explains how it works.

Jim Hunter: If you think of it's an upside down dome or like the bottom of a giant sphere and I'm holding my hands up to show how big it is, but it's probably 30 feet across and the dome part of it is about, you know, 6 feet deep. And so it's like the underside of a giant ball that has a little cup cut out of it. But it's this giant upside-down dome idea he had that basically took all of the reflected sounds and then dispersed them. Sort of like a stealth bomber that has the different kind of facets on it. It reflects in different, so totally deadened the room. You can really hear people talking in this room. You're very close to the actors and there's no residual reflection anywhere in the space. It's just a really wonderful space to do theater in.

In 1977, when all the renovations were completed, the first play was staged in the building, which had been renamed Longstreet Theatre. The play was Waiting for Godot, by Samuel Becket, and in the theatre department’s staging, there was a small pool of water from which an actor emerges. The sound inside the theater was so clear, audience members could hear drops of water landing in the pool as the actor climbed out. Every word from the actors’ voices was heard loud and clear. The reverberations and distorted sound waves ­ were gone.

Nearly 50 years later, Longstreet Theater is one of two premiere stages on the university campus. You can enjoy a couple of plays there this spring, including Romeo and Juliet in April. One more thing — I mentioned an indoor swimming pool that was built behind Longstreet in the late 1930s. That pool was decommissioned in the mid-1970s, and, as part of the renovations to Longstreet, it became a workshop for making and storing props and scenery for plays. As Shakespeare’s Hamlet once said: ‘The play’s the thing.’

That’s all for this episode. Next time on Remembering the Days we’ll have a special pre-Valentine’s Day treat for you — the stories of eight couples who met and fell in love on the University of South Carolina campus.

The podcast is produced by the Office of Communications and Public Affairs. I’m Chris Horn, thank you for listening and forever to thee.