Remembering the Days: Sweet friends, the legacy of Arpad Darazs and the Concert Choir

Nearly 60 years ago, a Hungarian-born choral conductor named Arpad Darazs turned the Concert Choir into an internationally touring ensemble that garnered fame for the university and continues to excel in chorale performance to this day.

The sound of your voice blends seamlessly with the others into a collective harmony — the sopranos, altos and tenors, baritones and basses become a musical e pluribus unum — from the many, one. It is perhaps the world’s most glorious musical instrument: the sound of human voices, singing together.

Nearly 60 years ago in 1966, the Concert Choir at the University of South Carolina was formed, and from the beginning, it was a special thing.

I’m Chris Horn, your host for Remembering the Days, and today we’re revisiting the story of how that choir became the university’s most prestigious choral group, and how it continues to carry on the legacy of its founder, a Hungarian-born music educator named Arpad Darazs. 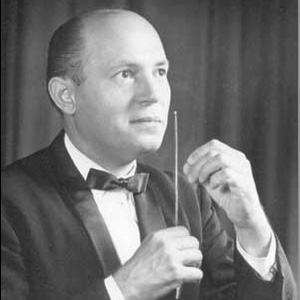 Arpad Darazs held the Concert Choir to a very high standard for auditioning and performance, and the bar remains high for both.

Sharon Altman: So he was the consummate professional, very knowledgeable as a musician. With a choir, he could take 60 voices and make them sound as one and control that group with the flick of a finger.

That’s Sharon Altman, who earned bachelor’s and master’s degrees in music from the university in the 1980s and was the last graduate assistant for Arpad Darazs, the Concert Choir’s first conductor.

Sharon Altman: When he conducted, he didn't have to wave his arms and dance on the platform. He was a minimalist of conducting and little movements of his hands just produced masterful sounds from the choir. There's not one of us in there who thought that we had a good enough voice to be there. His drive for perfection was just something you wanted to give him. You just wanted to do what he was asking.

Darazs studied under the legendary Hungarian composer Zoltan Kodaly, who pioneered methods for teaching music to young people. In 1956 at the age of 44, Darazs smuggled his wife and three young children out of that then-communist country and immigrated to the United States. On the journey across the Atlantic, Darazs formed a makeshift choir of refugees and crew — most of whom didn’t speak English — and led them in singing the "Star-Spangled Banner" as they steamed past the Statue of Liberty in New York harbor.

In 1966, 10 years after Darazs’ arrival in America, the University of South Carolina recruited him to join the faculty of its fledgling music department. Soon after, Darazs organized the Concert Choir as a performing ensemble, and by the summer of 1969, it became the university’s first choral group to tour internationally with concerts in Lisbon, Madrid, Paris, Cologne, Amsterdam, London and other European cities.

Darazs would later serve as conductor of the Columbia Philharmonic Orchestra, and in 1981, he founded the Palmetto Mastersingers, an all-male chorus that went on to win its own critical acclaim. But the Concert Choir was the apple of Darazs’ eye.

Using techniques from his own training, Darazs coaxed the student voices of the choir into an award-winning ensemble. Sharon Altman remembers a concert in South Korea in the 1980s when choir members were a little on edge.

Sharon Altman: There's an adrenaline rush that comes before an event like that that doesn't make you nervous, but it keeps you on your toes. When we were in Korea at a concert hall there that seated three to five thousand, and he came backstage before the concert and said 'Sweet friends,' which was his phrase that he always used, he said 'Sweet friends, just remember now it's not how many people that are out there that counts. Let's go. Let's do our best.' And then we go out there and the concert hall is full. I guess he didn't want us to be overthrown by seeing that many people out there in a foreign country who came to hear us sing.

Choral music performed at universities grew out of centuries-old sacred music traditions and has evolved quite a bit over time. Darazs introduced the Concert Choir students to different types of music, including folk songs from his native Hungary. His choral selections broadened the scope of their musical horizons and fostered a strong sense of esprit d’corp.

Sharon Altman: None of us knew the kind of music that we sang in concert choir. It's not the kind of music you grew up singing in church or high school choruses. He just took everything up to a level you just didn't even know existed. So he was demanding in that you wanted to do what he wanted you to do. So when when he asked for a certain sound, you didn't even know whether or not you could produce that, but you did it because he wanted you to and it came out.

1986 marked Darazs’ 20th year of leading the Concert Choir in its regular tours around the state, across the country and, every so often, to international competitions, which burnished the choir’s reputation for excellence.

1986 was also the year of the city of Columbia’s bicentennial celebration, and a cast of renowned musicians — people like Leontyne Price and Yo-Yo Ma — performed in a series of concerts to mark the event. The Bicentennial Committee wanted one such event to honor a local citizen, and for that honor they chose Arpad Darazs.

A choir with more than 800 voices was pulled together from several universities and colleges in South Carolina, and they performed with an orchestra in a tribute to Darazs’ pioneering leadership as a choral conductor in the Palmetto State.

Darazs was 64 years old and dying of leukemia, but he was able to bask in the glow of that one final performance. He passed away later that year.

Though no one was ready to say goodbye to the man who had been the heart and soul of the Concert Choir, the university was committed to keeping alive the flame that Darazs had ignited. Larry Wyatt became the new choral director, and he would lead the Concert Choir and other university choral groups with distinction from 1987 until his retirement just a few years ago.

Alicia Walker is now the director of choral studies and of the Concert Choir, which continues to be the School of Music’s flagship ensemble. As it has been since its founding under Arpad Darazs, membership in the Concert Choir is by audition only.

Alicia Walker: And it's really a judgment of their vocal ability, their talent and the development, maturity in their voice, but also their musicianship skills, how well they read music and how they conceptualize music. It's a competitive process, I would say.

Walker is only the third director in the nearly 60-year history of the Concert Choir, and she, like her two predecessors, delights in the hard work of motivating and inspiring the student singers.

Alicia Walker: All of us teach out of our personalities, you know, you bring your best self. But when you're in front of a group like that, you really do have that role of an artist who tries to inspire people to do their best. And so it's really evident that Arpad Darazs was a master of that — of motivating people and inspiring them to do their very best singing.

To have these pivotal experiences that are intellectual, they're academic, they're musical, they're artistic, they're emotional. And to have all of that come together. And not only that, but to do do it on a large scale, you know, they began traveling in the world and singing in competitions and to have all of these experiences at this very formative time of life. You just don't ever forget that. And so it's, you know, it's an incredible opportunity and responsibility that we have because to have those experiences be positive and to be the things that motivate people to keep singing all of their life. You know, that's a very unique opportunity. And there's no doubt that — I mean, it's clearly evident that Darazs was just a genius at that and was uniquely inspiring.

The University of South Carolina Concert Choir and the spirit of Arpad Darazs lives on. The choir will perform in England in June, and alumni of the choir from 1966 to 1986 are planning to meet in Columbia this July for a reunion that will coincide with the 100th anniversary of Darazs’ birth. Sharon Altman is the keeper of the flame for the Darazs devotees, and she says it will be a weekend of smiles, tears, sharing old memories and singing old songs.

As Arpad Darazs himself might say, ‘Sweet friends, that’s all for this episode.’ On the next Remembering the Days, we’re going to look back at the remarkable presidency of Tom Jones, who led the university from 1962 to 1974, a 12-year period of rapid change that included the university’s desegregation, a campus enrollment and building boom and much more.

Remembering the Days is produced by Communications and Public Affairs at the University of South Carolina. I’m Chris Horn, thanks for listening and forever to thee.