Remembering the Days: A once and future treasure, the South Caroliniana Library

Built in 1840, the South Caroliniana Library was the nation's first free-standing library. Here's the story of how it came to be and what it has become in the years since.

If you were shopping for a new car and money was no object, you might test drive a Maserati or maybe a Lamborghini …

Perhaps a Rolls Royce would be your style…

“The keys to your new ride, sir. Freshly waxed as per your request.”

But, if you’re like most people with limits on your car-buying budget, you would probably settle for an automobile with the options you actually needed at a price you could afford.

I’m Chris Horn, your host for Remembering the Days, and that’s sort of what happened more than 180 years on the University of South Carolina campus. The year was 1838 — we were known as South Carolina College back then — and the college was getting ready to build a new library. 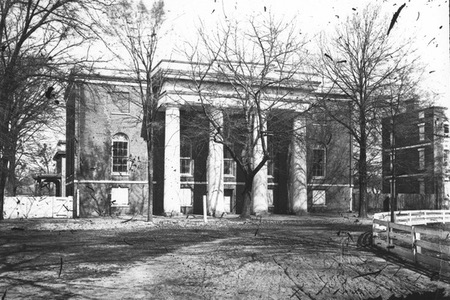 This what the South Caroliniana Library looked like about 30 years after it was constructed in 1840. Note the unpaved track and fence on the Horseshoe grounds.

Robert Mills was a South Carolina-born architect who had designed the Maxcy Monument on the Horseshoe in the 1820s and who would later design the Washington Monument. Mills had a vision for the new library that, had it been built according to his original design, would have been absolutely eyecatching in the 1800s and would probably still be turning heads today.

John Bryan: "So the library was intended by Mills to be raised up on a pedestal, just like a piece of sculpture. You would have entered the Horseshoe by going through the library building. It would have been like a Roman triumphal arch, 18 feet high."

That’s John Bryan, a retired art history professor at the university who wrote a book called Creating the South Caroliniana Library. He says that Mills wanted the college to place the new library at the base of what we now call the Horseshoe, facing Sumter Street. To enter the college campus, you would have gone through an archway at the base of the library building.

If you stop and think about it, making the library the focal point of the campus back then would have been amazing. But amazing architecture often comes with an equally amazing price tag.

John Bryan: "In a nutshell, the university didn't have the money. And so the board of trustees moved the library from facing Sumter Street to just being another building on the Horseshoe."

In addition to placing the library in line with the other Horseshoe buildings, the college also asked Mills to scale back on several aspects of his original design. So instead of an 18-foot-tall archway underneath the library, four large Roman-Doric columns were added to the front of the building. Several other of Mills’ ideas were retained, including the ornate second-floor reading room, with its three massive skylights. Those skylights were vital for illumination because during much of the 19th century, candles and lanterns were not allowed inside the library due to the risk of fire.

Mills’ first design — the one with all the bells and whistles — would have cost about $64,000 to build. The library that was actually built and still stands today had an original pricetag of just $23,491.50. So the college saved a lot of money and still ended up with a very beautiful library.

Let’s back up for just a moment. When South Carolina College opened its doors in 1805, its library collection — all of the books and maps and so forth — occupied one of the rooms of Rutledge, the first building on campus. In 1813 a two-story building was added to house both the library’s contents and the student chemistry labs. It turned out that books and chemicals were not a good combination. Chemical fumes from the students’ lab experiments wafted up from the first floor and permeated the pages of the library books on the second floor, which left them smelling like sulfur or hydrochloric acid or whatever chemicals happened to be brewing in the test tubes down below.

When that building began to leak and fall apart in the 1830s, Robert Barnwell, the third president of South Carolina College, led the efforts to build the new library. When it was finished in 1840, Barnwell then campaigned for funds to buy more books and a decade later, South Carolina College had more than 18,000 volumes and could boast of having one of the two best libraries in the South. It was also considered one of the best libraries in the entire United States at that time.

The South Carolina College library didn’t retain that lofty reputation for long. The end of the Civil War brought devastation to Columbia, with fire destroying much of the capital city and about 100 of the library’s books that had been loaned out to various individuals. It would be years before the college would have funds to add more books to its library.

Now let’s fast forward to 1940 when the University of South Carolina built another library. Here’s Elizabeth West, the university’s archivist.

Elizabeth West: "The 1840 library building served as the College Library for 100 years. And when a new library building was constructed, which is now McKissick Museum, the original library building — there were different considerations what to do with it, including a push to make it a student union building or to put offices in it and set up cubicles in that magnificent reading room. And, fortunately, wiser heads prevailed, and a group of faculty and historians and USC President James Ryan McKissick were successful in having it converted into a special collections library focusing on the personal papers and materials of South Carolina's history and culture."

So the library that had been built in 1840 — the one that holds the distinction of being the nation’s first freestanding college library building — became known as the South Caroliniana Library. The idea was for this old building to serve a new purpose as a repository for diaries, letters, newspapers, photographs, basically anything that pertains to the history and culture of the state of South Carolina.

Elizabeth West: "And it really built a great collection ranging from our Colonial era up to modern, very modern times. We have diaries, we have broadsides, posters, books, magazines. We are the state's main repository for South Carolina newspapers. We have art, photographs, negatives, letters, ledgers. Just a wide, wide range of materials throughout South Carolina history. From the wealthy and the famous to middle class to former enslaved persons to all levels and ranges of South Carolinians in our society. And that is really what makes a more holistic picture of our state and its people and its events, pulling from all of these different walks of life rather than just, you know, the prominent and the famous."

You might be wondering who looks at all this stuff that’s stored in the South Caroliniana Library, and the answer is genealogists and family historians to be sure, but also history scholars and writers from across the country and around the world.

Elizabeth West: "If there is a book published on South Carolina history or southern history, it is almost a guarantee that the author would have conducted research at the South Caroliniana Library."

For the past couple of years the South Caroliniana Library building has been closed for major renovations. Contractors are improving the heating and air conditioning systems, adding a fire suppression system and building a climate-controlled vault for some of the library’s most delicate documents. They’re also restoring the second-floor reading room to its original splendor.

Elizabeth West: "When you come into the reading room when this is done, you're going to see this exquisite room with its incredible history of all the people that have come in there before — this beautiful return to its historical look as best we can, it's not going to be perfect, as best we can and appropriate furnishings. Appropriate custom made reference desk, so it fits in with the architectural style of the room, and it's going to be modernized with the heating and air system, with more computer, Wi-Fi access and things like that, so we can better serve our researchers."

The South Caroliniana Library is set to reopen late this year, and it will be a celebration. The current renovations are breathing new life into the nearly 200-year-old building, and you can check it out — in person if you can — when all the work is completed.

That’s all for this episode. Next time on Remembering the Days, we’re going to do a little historic eavesdropping on college students as we listen in on the letters they wrote to home from across the decades.

This podcast is produced by Communications and Public Affairs at the University of South Carolina. I’m your host, Chris Horn. Thanks for listening, and forever to thee.