Sarge Frye knew how to make grass grow, and for five decades he made sure the University of South Carolina's athletic fields were green and trimmed. But much more than that, Sarge had a heart for people and connected with everyone he met. It's why his name continues to be synonymous with Gamecock sports.

Jerry Frye: “He was just one of those guys that people fell in love with. And they just, you know, they just liked him and never forgot him.”

His name was Weldon B. Frye, but everyone knew him as Sarge.

Jerry Frye: “He never met a stranger. A stranger never met him. From the richest guy or the poorest guy, he related to everyone, and everybody, you know, loved Sarge.” 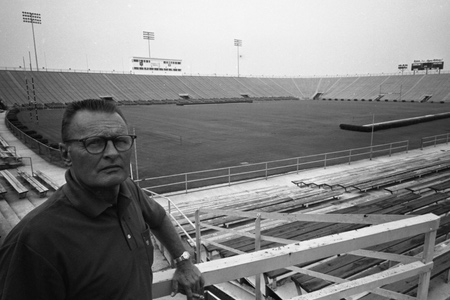 Weldon B. "Sarge" Frye, early in his career as head groundskeeper for the Athletics Department at the University of South Carolina.

Sarge Frye’s son Jerry has proud memories of his dad, including Sarge’s 23 years of service in the U.S. Army ­and his bravery in World War II and the Korean War that resulted in the Purple Heart and the Bronze Star. All of that happened in the first half of Sarge Frye’s life. In the second half, Sarge forged a new career for himself at the University of South Carolina — growing grass.

I’m Chris Horn, your host for Remembering the Days, and today we’re looking back at the remarkable life of Sarge Frye, whose nearly 50-year association with the university made the campus a greener place and forged indelible memories for everyone who knew him.

Sarge grew up in Tennessee and joined the Army at age 18 in 1931. He was wounded during the D-Day invasion in World War II but quickly rejoined his unit and continued fighting until the end of the war. He went back into combat in Korea a few years later and then, thankfully, his days on the frontlines came to an end. He and his family were stationed at Fort Jackson in Columbia for his final posting, and that’s where he was put in charge of the fort’s recreational facilities — and it’s how he learned to grow grass on a large scale. The university hired him to take care of its campus grounds when he retired from the Army in 1953.

Sid Kenyon: “Sarge, if you knew Sarge, he called just about everybody, 'Bubba,' and he said, ‘Bubba, you know, I didn't really know that much about it at first,’ he says, ‘but I noticed if I was hauling fertilizer around somewhere, whenever fertilizer fell off my little cart and you put water on it and the sun hit it, grass grew.’ So I mean, I'm sure he was underselling his knowledge a little bit, but that's sort of how he started. And then, you know, after he retired over there, he ended up at the university taking care of all the university grounds for a while before he became strictly athletics.”

That’s Sid Kenyon, general manager of the Colonial Life Arena who, decades ago, worked closely with Sarge Frye at the Athletics Department. Sid remembers Sarge as dedicated to his work while at the same time being laid back, encouraging those around him not to take anything too seriously. Perhaps after you’ve been shot at on a regular basis like Sarge had been during two wars, the stress of civilian work just wasn’t anything to get too worked up about.

Sid Kenyon: “He was a very quiet, very confident person. I'd say he was also a very calming person. Even when things were tumultuous, he would, he had a knack of calming everyone down, still being very focused on what needed to be done and getting it done, but not letting the collateral things get in the way. He would often say to people, over at the time it was the Roundhouse where the athletic offices were, and people would be scurrying around and he, you know, he’d tell people to slow down, just slow down. It'll be all right.”

Sarge supervised the university’s athletics fields for 15 years, then was placed in charge of the entire campus grounds in 1968. He retired from full-time employment at the university in 1977 but continued to supervise athletics fields on a part-time basis for another 20 years. In 1980, the athletics department named its baseball diamond Sarge Frye Field in his honor. And in 1993, when he was 80 years old and still showing up every day to keep an eye on the athletics fields, the American Baseball Coaches Association named him National Groundskeeper of the Year.

Ray Tanner is now the athletics director for Carolina, but he started his career with the Gamecocks as the head baseball coach in 1997. When he interviewed for the coaching job, Tanner asked if he could meet Sarge Frye.

Ray Tanner: “I knew the legend of Sarge Frye and the immaculate playing surface that he created. The surface of the field resonated throughout college baseball and elsewhere that this guy down at South Carolina, he takes care of a field better than anybody. You know, he's the guy that makes makes it happen. And so when I came here I asked the athletics director if I could visit with Sarge while I was here. I wanted to visit with him because it's Sarge Frye. I mean, in my world, that was a big deal.”

Ray Tanner clearly had a lot of respect for Sarge. But even though Tanner became the head coach and Sarge Frye was just the groundskeeper, there was one lesson Coach Tanner had to learn — when it came to growing grass, Sarge was in charge.

One autumn day, Coach Tanner had the players cover the field with a tarp because rain was in the forecast and they wouldn’t be able to practice the next day on a wet field. That’s when Sarge called the coach on the carpet.

Ray Tanner: “And this particular day, late in the afternoon, I got the message, 'Hey, Sarge is looking for you.' Never had it put to me, like, ‘Sarge is looking for you.’ Like, I would see Sarge. We would chat, we would visit, he'd come by the field, he'd come by practice. Sarge is looking for you. And I wasn't quite sure why he wanted to see me. But even then, I knew I had done something probably wrong, and I had no idea what it was. We met and he said, 'You covered the field.' He said, 'Bubba, we don't cover the field in the fall. That's when we grow grass, that's when we take care of the field. And I said, 'Sarge, we have a limited number of practice days, so we try to salvage practices. I mean, I didn't want to cover the field either, but if you didn't practice, you lose those days, the rules changed.' Sarge had no interest in hearing that, so I didn't try to win the conversation. I just basically said, 'I understand. I'll make sure we try to avoid that in the future.' ”

So Sarge really was in charge, but he was getting older, and the people he worked with kept a watchful eye over him. Sid Kenyon remembers a day that he thought Sarge might have been in trouble.

Sid Kenyon: I remember one time he was probably already 80 or somewhere in that range. I'm not going to say I'm worried about him, but I always tried to make sure he was OK. My office at the time was over at Williams-Brice Stadium, and I can't remember the particular time of year, but it was later in the afternoon and I walked out onto the football field and I looked across and Sarge was down on his hands and knees and he was at a distance. I was to his back and he didn't see me. And so I didn't run, but I was moving pretty quick because I was afraid something had happened to him. And as I got closer, I noticed he had a divot of grass that was around a sprinkler head and he was putting it back in place and he was tamping it down and he was yelling 'Grow, grow!' And so I, at that point I said, ‘Oh, I see your, I see your secret now!’ And he was kind of startled and he kind of jumped and he said, he says, 'Bubba, sometimes you just got to talk to it.' "

Sarge did more than talk to the grass. He talked with everyone.

Ray Tanner: “He connected with people. It didn't matter who you were. It didn't matter what your status was. Didn't matter if you were the head coach. Didn't matter if you were the third assistant on the track team. You know, there was that connection and there was that conversation that he knew you. He had time for you. It's never, never, you know, in a hurry like me. It was always like, it made you feel good being in this company. He was just a very, very warm person that you just admired.”

In addition to his groundskeeping duties for the Athletics Department, Sarge Frye was also the timekeeper for men’s basketball games. His son Jerry says Sarge didn’t miss a game for 35 years. Jerry shared his father’s enthusiasm for Gamecock sports — he was a standout on the Carolina football team from 1958 to 1960. Jerry’s son, Jay — Sarge’s grandson — was a football letterman at Carolina in 1983-84.

After decades of growing green grassy fields on the university campus, Sarge Frye passed away in 2003 at age 90. The baseball field that was named in his honor doesn’t exist anymore — it was replaced by Founders Stadium more than a decade ago. But just beyond the outfield wall of that shiny stadium is Sarge Frye Plaza, a tribute to the legendary groundskeeper who never met a stranger and was loved by all.

That’s all for this episode. On the next Remembering the Days, hold on to your hat — we’re going to revisit student life in the Towers — or the Honeycombs or whatever you might have called them — you remember, those old dorms near the library and the science buildings where all kinds of things happened, including a few anecdotes we can share on this podcast. Hope you can join us for that trip down memory lane.

I’m Chris Horn, thanks for listening and forever to thee.