Scores of University of South Carolina graduates have died in military service since the Spanish-American War at the close of the 19th century. In observance of Memorial Day, we remember three who died serving their country in World War I, World War II and the Vietnam War.

“Darling, I am hungry for you — so hungry that I can feel the smoothness of your face against mine; the sweet roundness of you in my arms, can sense the fragrance of you and taste the kisses as of old …”

Thirty-one-year-old Lt. John Reynolds Jr. was far away from home when he wrote this letter to his wife, Emily. In fact, the 1907 Carolina graduate was manning a machine gun on the front lines of France in World War I.

“This war is the only thing that could tear me away from you — there is nothing else that we would let come between us. And when the war is over, there need be no more separations; there won’t be, for we’ll have such a long time to make up.

I’m Chris Horn, your host for Remembering the Days, and in a salute to Memorial Day, we’re honoring University of South Carolina alumni, past and present, who have served in the armed forces. 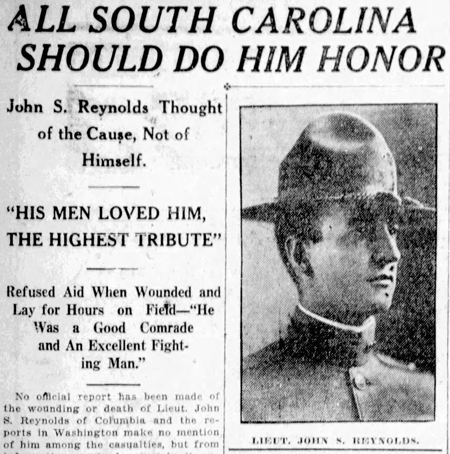 Lt. Reynolds wrote the letter you just heard on Sept. 1, 1918. On Oct. 10, he was killed in combat near Nantille, France, one month before the war ended on Armistice Day, Nov. 11. His daughter, Joan, was born two weeks after the war’s end. She never met her father, who had been an editor at The State newspaper before he was drafted into the Army.

Reynolds is one of well over 150 graduates of the university who have died in military service since the Spanish-American War at the end of the 19th century. James Hull is a U.S. Marine veteran who recently earned a bachelor’s in history here at Carolina and is currently working on his master’s degree in public history. For the past three years, he’s been busy finding details of what happened to alumni soldiers like Lt. Reynolds.

James Hull: “Putting a face to the name and telling their stories is really what I started doing back in 2019.”

Hull, who served several tours overseas during his time in the Marines, believes that we honor fallen veterans best by remembering them.

On the front lawn of the War Memorial Building, located on the corner of Sumter and Pendleton Streets on campus, two historic plaques and a row of granite and bronze markers memorialize the 28 university alumni, including Lt. Reynolds, who died during World War I and the Mexican Border War. More than 500 Carolina alumni served in the military during both conflicts.

Little more than two decades after World War I ended, the United States joined the Allied effort in World War II, and many more Carolina graduates answered the call of duty. One of them was Crawford White, a 1937 graduate who had been working for an insurance company in Columbia. Like thousands of other American men, he volunteered for duty in January 1942, shortly after the Japanese attack at Pearl Harbor.

White joined the Army Air Corps and after earning his wings, the new lieutenant was a bombardier-navigator on a B-25. On Dec. 30, 1943, during a bombing run on the Yangtze River in China, Lt. White’s plane went down into the river, killing him and the rest of the crew. White’s grandfather was Robert Means Davis, a beloved history professor at Carolina for whom Davis College on campus is named in his honor.

Our history detective James Hull has a special connection with the next alumnus we remember. Joseph Felder Hart graduated from Carolina in 1967 while the Vietnam War was intensifying. Hart was the student battallion commander of the Naval ROTC unit at the university, so there was little doubt that he was headed to Vietnam when he graduated.

Hart volunteered for the Sea Wolves, a quick-reaction helicopter squadron that flew more than 120,000 sorties, mostly in the Mekong Delta region. While piloting a helicopter to rescue the crew of another copter, Hart’s aircraft was shot down. He was hit by machine gun fire on the ground while trying to assist other soldiers to safety. Forty-four Seawolves were killed in action in Vietnam, and Lt. Joe Hart was one of them.

In the course of his research on Lt. Hart, James Hull met some of Hart’s family members who entrusted him with the fallen pilot’s medals and other records. Together, they visited Lt. Hart’s gravesite here in Columbia.

James Hull: “Now taking care of Joe's headstone for maintenance and making sure that everybody knows who Joe is and to tell his story.”

In piecing together more stories of Carolina alumni who made the ultimate sacrifice in service to their country, Hull notes that some of the first trustees of South Carolina College, the 19th century precursor of the university, were veterans of the Revolutionary War.

He also came across another individual who was not a graduate, per se, but attended South Carolina College for several years. James Butler Bonham entered the college in 1824 and in 1827 he led a student protest over what he considered harsh attendance regulations and the poor food served in the Steward’s Hall, where students took their meals. If you’re a regular listener to this podcast, you probably remember the episode about students who were periodically disgruntled with the college grub.

Bonham was expelled because of the protest but he went on to gain glory. He would fight and ultimately die in the Battle of the Alamo in 1836. There’s an elementary school in San Antonio and a town in Texas is named in his honor.

We could tell stories about more alumni who were killed while serving in this country’s armed forces. But let’s take a moment instead to think about why we should remember everyone who has served — those who died and those who came back.

Jared Evans is a Marine veteran, a Carolina graduate and current director of the university’s military engagement and veteran initiatives.

Jared Evans: “The one thing to remember, especially with Memorial Day, is, you know, our brothers and sisters and the men and women who deploy to fight in these wars, they're not in the business of policy decisions and determining whether or not we should or shouldn't. Ultimately, they're answering a larger call to serve and they're instilled with this sense of selfless sacrifice to their country, and that's what drives them — the call to serve and when they don't make it back and they pay the ultimate sacrifice, it's incumbent upon us to remember them and to always honor them and to ensure — there's a saying, never forget — to ensure that we never forget the sacrifice that they paid so that all of us, whether it was our brothers and sisters in arms or civilians who have no military experience and never served. It's imperative that we never forget the sacrifice they paid so that we can enjoy the luxuries we enjoy and argue about the things we argue about as a country. So that's why it's really important to me.”

That’s all for this Memorial Day tribute. The final episode of the spring season is on the way, and we’ll be talking to two women who were among the first 18 to earn athletics scholarships at the University of South Carolina. It’s a fascinating look back nearly 50 years ago.

For the university and Remembering the Days, I’m Chris Horn. See you next time and forever to thee.