When siblings Nancy and Thomas Scott were growing up, the University of South Carolina was like their second home. Both their parents, Patrick and Mary Jane, worked on campus — both initially in the English department and later in other roles.

“It’s safe to say for the first 10 years of my life, which would be the first 14 years of Nancy’s life, we were around the university a lot. During the summer, we would just kind of live down there,” says Thomas Scott, who has pursued a legal career focused on financial transparency and emerging technology.

Both he and Nancy remember coloring in their dad’s office using crayons and markers he kept in a drawer, riding bicycles and roller blading between Gambrell Hall and McKissick Museum and hanging out on the Horseshoe. 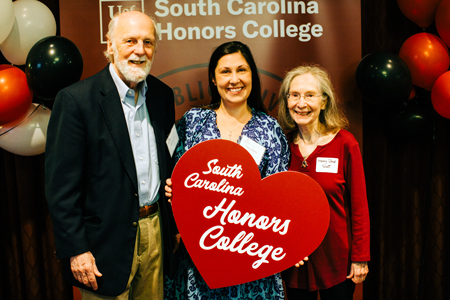 Their dad, Patrick Scott, retired from the university after many years as an English professor and later as director of rare books and special collections for University Libraries. Mom, Mary Jane, also worked in the English department and the university Writing Center as well as the Thomas More Center before changing careers to become a victim’s advocate for the Forest Acres (South Carolina) Police Department.

With such strong connections to the university, you might think the college decision for Nancy and Thomas was a foregone conclusion. Not so.

To put it bluntly, “We felt like, ‘No, we will absolutely not stay in town,' ” says Nancy Scott Glenn, a high school English teacher in Columbia.

“I think that growing up in Columbia, you take USC for granted,” she adds. “It was a big part of our foundation and our family connection that has always been there. But it's like a hidden gem to have the university and the South Carolina Honors College right here with the potential for scholarships and an experience that would help us learn and grow and get to a place where we have jobs and successful careers.”

After weighing other options, both brother and sister chose South Carolina because of the value and quality of the Honors College experience.

“It just didn't make sense to go out of state to get what we could get right here and save money. How can you say no? USC ended up being the best fit for us,” Nancy says.

Nancy received a bachelor’s in English in 2002 and a master’s in teaching in 2004. Thomas, a Carolina Scholar, graduated in 2006 with a BARSC degree in African development, then earned a law degree from Stanford University and a master’s in public affairs from Princeton. Thomas was also a Truman Scholar and co-founded the Waverly After School Program after an experience with the university’s MLK Day of Service.

It just didn't make sense to go out of state to get what we could get right here and save money.

Thomas now lives In San Francisco and is chief legal officer for Worldcoin, a startup seeking to distribute cryptocurrency to the unbanked around the world. Nancy is in her 18th year of teaching. She is National Board certified and previously served as chair of the English department at Spring Valley High School in Northeast Columbia. She has taught thousands of students, many of whom have attended the Honors College themselves.

“I really like working with teenagers,” Nancy says. “People think that's crazy, but working with kids and helping them figure out who they are is one of the most exciting things I can think of. That is probably why I've stayed with it because I still feel like I somehow can connect with them and engage and excite them.”

Thomas previously worked at a self-driving car company. His current role at Worldcoin combines that tech background with his international experience for what he calls “a wildly ambitious goal” to help make financial services more accessible in underserved parts of the world.

“We hope to open up opportunities where even something as simple as opening a bank account or paying bills often can’t be taken for granted,” he says.

The Honors College recognized the siblings as 2021 Outstanding Young Alumnus and Young Alumna.

Both Nancy and Thomas say the joint recognition was special because their paths have been so different, and it illustrates the range of pursuits and contributions for Honors College graduates.

“If I view the Waverly After School Program, for example, as something that means a lot to me as a personal contribution, Nancy has done that with generations of students for the last 18 years as a teacher at Spring Valley. So, that's kind of night and day as compared to doing cryptocurrency but extremely significant to underscore what the Honors College contributes locally, statewide and globally,” Thomas says.

In fact, Nancy shared that when Thomas was notified that he would receive the young alumnus award, he suggested she should be recognized also.

“I think part of that is he wanted to make sure the importance of teaching was recognized and that it is a distinguished career for Honors graduates,” she says. “The two of us are kind of a lesson that you can serve your community, help others and do good things in your career in such different ways. The Honors College helped us think that way — go out and find something you love, do it and work hard at it.”