No internet, no phones, no video games — just exploring the flora, fauna and island wildlife while making new friends and unforgettable memories. This isn’t the world many children experience today; instead, it’s the magical realm conjured up in the popular Islanders children’s book series.

It’s been a long road from journalism to children’s books for Angela McCurry May, an alumna of the College of Information and Communications. She always planned to report the news — and she has. Now, she is also making the news as a New York Times bestselling children’s book co-author.

May was laser-focused on becoming a broadcast journalist after her first journalism class at Stratford High School in Goose Creek, S.C. Her passion for news and storytelling spurred her to study journalism at the University of South Carolina.

“I remember coming home after my first semester saying I love the University of South Carolina, and this is where I really belong,” says May. “Then senior semester was so intensive and taught me what it's like to truly work in a newsroom. I felt as prepared as you can be for the real world, thanks to that program. They set the bar high and force you to get out of your comfort zone. I'm grateful forever for that.”

Getting a degree in journalism is such a great field even if you decide that you want to branch off into something slightly different. It gives you the skills, the knowledge, the expertise to do so many different things with your life. Angela is a great example of that.

May graduated from South Carolina in 2002 with a degree in broadcast journalism and minor in political science. As the job hunt began, she was on the fence about accepting a position as a part-time tape editor for a television station. Relying on professor and adviser Andrea Tanner’s advice, she decided that it was her chance to get her foot in the door.

It did not take long before she was reporting important community news. Thanks to her sunny personality and hard work ethic, she moved up the ranks from editor to producer and reporter, and then to morning news anchor.

May ended up as an anchor for ABC News 4 in Charleston and capped 12 years of working in television news. During her career, she earned the South Carolina Broadcasters Association Star Award, a National Telly Award and a Southeastern Emmy Nomination. 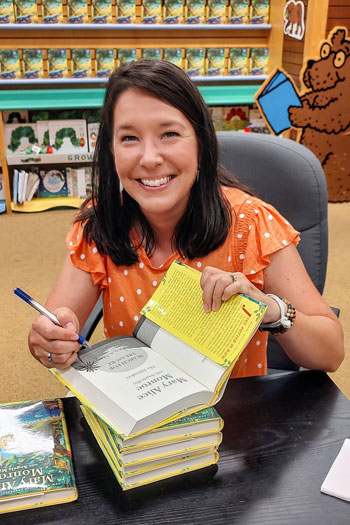 "I want to inspire kids and encourage them, whether it is to help show them that reading can be fun or to help share nuggets of information for those young aspiring writers." — Angela May, '02 broadcast journalism

After more than a decade in journalism, May decided it was time for a change.

“I decided I'm just going to use all my skills, flip them inside out and help others in a new way,” says May. “So, I took my journalism background and pivoted to PR and still do media work.”

The result was May Media and PR — and one of her first clients was South Carolina novelist Mary Alice Monroe.

Monroe was growing her career and wanted May’s help managing things behind the scenes. After several years working together, Monroe invited May to collaborate on a book series for kids, targeting middle school children. It was a daunting and exciting opportunity she could not turn down.

“I have worked some crazy hours and had assignments that I thought I could never pull off,” says May. “College and journalism taught me that I can do hard things. That really did prepare me for this next stage when it came to writing books. It was a scary time because I didn’t have a degree in creative writing, but I learned I can do hard things.”

Writing children's books had been an unspoken dream for May that was coming true. The Islanders and Search for Treasure were instant New York Times Bestsellers, earning starred reviews, and the latter was selected as a Kids' Indie Next Pick in 2022 by the American Booksellers Association. The tales are heartwarming stories geared toward middle-grade readers aged 8 to 12 about outdoor adventures, friendship, loss, and the healing power of nature.

“I've always loved words, reading and stories my whole life,” says May. “So that's what you do as a journalist, right? You tell important stories through the lens of a journalist. Fact-based. Now I'm just so happy that I also get the opportunity to challenge myself to learn how to write and tell stories that I get to make up.”

The characters are fictional, but the setting of Dewees Island is a real place in South Carolina and the things that they experience and learn about their island world are interesting facts that readers learn through the journey.

“I hope that when they close the book that they feel inspired to want to make their own adventures out in the wild, to take intentional breaks from the screens,” says May. “I want to inspire kids and encourage them, whether it is to help show them that reading can be fun or to help share nuggets of information for those young aspiring writers.”

May says this is only the beginning of her contribution to children's literature. There will be a third book in the series and more stories that she hopes to bring from her heart and mind to the paper.

As for the transition from journalism to children’s books, her former professor, Andrea Tanner, isn’t surprised.

“As a journalism and mass communications professor, I want to make sure that our graduates are prepared for anything that they decide they want to do,” Tanner says. “Getting a degree in journalism is such a great field even if you decide that you want to branch off into something slightly different. It gives you the skills, the knowledge, the expertise to do so many different things with your life. Angela is a great example of that.”