Remembering the Days — The Myth of Commodore Capstone

What building on the University of South Carolina campus was named for a Confederate navy commodore and commemorated on a picture postcard? It's a trick question! Separating fact from fiction is the real story.

It’s way too early in the fall semester for a pop quiz, so I won’t spring one on you just yet, but I do have a trivia question: What building on the University of South Carolina campus was named for a Confederate navy commodore and commemorated on a picture postcard? Think it over and lock in your response — the answer is coming in just a moment. 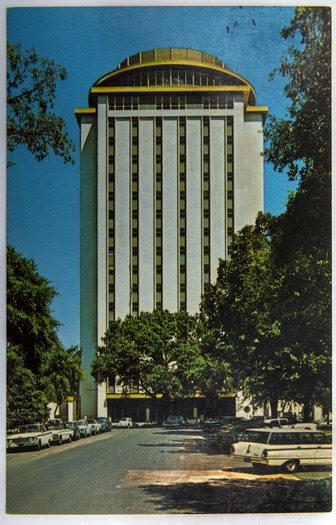 I’m Chris Horn, your host for Remembering the Days, and today we’re looking back to the late 1960s when there were serveral new or fairly new buildings on campus and the university hadn’t gotten around to naming all of them. For example, what we now call the Thomas Cooper Library — named for the university’s second president — was, back then, known simply as the undergraduate library. And what we now call the Jones Physical Sciences Center, named for former university president Tom Jones, was called simply the physical science building.

An editorial writer at The State newspaper decided to take the university to task in a good-natured way for its slowness in giving the new buildings proper names. So, on Jan. 3, 1968, the newspaper published a tongue-in-cheek editorial that started out seriously enough.

“Graduates of the University of South Carolina must swell with pride these days as they gaze upon the magnificent new structures which now dominate the Columbia skyline and attest to the growth of the institution. And how proud they must be also of their university’s long and illustrious roll of distinguished presidents, professors, trustees and alumni whose names are perpetuated in the handsome new structures which soar above the campus.”

So far, so good. But the writer began to put tongue firmly in cheek as the editorial went on.

“We refer, of course, to such notable Carolinians as the late Commodore Epaminondas J. Capstone, whose service to his school, state and the Confederacy is preserved for posterity in the towering gold-hued dormitory known as Capstone House.”

If you didn’t know better, that line seems plausible. In the Civil War, the Confederate forces had a navy and they had commodores. And, this being a state in the Deep South, the idea of naming a building for a Confederate military hero would not have been outlandish more than 50 years ago. But the rest of the editorial goes off the deep end.

“And speaking of towering, there is South Tower itself, named for that eminent 19th century scholar, Professor South Bywest Tower, a native son of East Babel, South Carolina.”

The piece goes on to talk about a long ago trustee named Under Graduate, the supposed namesake of the Undergraduate Library. It also refers to a world renowned chemist Dr. O. Physical Science, obviously the namesake of the physical science building.

Anyone who read past the sentence about Commodore Epaminondas J. Capstone would certainly have realized the editorial was just a good-natured joke. But the part about Commodore Capstone took on a life of its own.

Bob Wertz: "And I don't know why it just stuck in my head. I was a baseball card collector. And there are all those error cards in baseball where someone made a typo on a card, and so I just, I kind of wanted to find one. And so every time I would go to an antique store, I would look for one. And it took a long time but finally I found one online, and on the back it was clearly the card that had the error on it."

The postcard Bob is talking about was published by Dexter Press of West Nyack, New York, and it features a beautiful photo of the 18-story Capstone House in all of its glory. On the back of the postcard in the place where you would write a short note and address it to someone, there’s a caption that reads: “Capstone House. Ultra-modern dormitory on the campus of the University of South Carolina is unique because of the gold-hued revolving restaurant on top of the structure. The building is named in honor of Commodore Epaminondas J. Capstone, famous for his service to his school, state and the Confederacy.” Obviously, whoever wrote the postcard caption for Dexter Press had read The State newspaper’s editorial.

Bob researched the case of the erroneous Capstone postcard and discovered that a few weekly newspapers around the state had republished The State newspaper’s editorial — that was common practice back then — but they ran only the first portion of the piece. They left off the obviously tongue-in-cheek part, leaving the somewhat plausible lines about Commodore Capstone. The unfortunate caption writer for the postcard company had likely read one of those condensed versions of the editorial.

Bob Wertz: “After the card made it out, people were actually calling the switchboard, asking, you know, if it was really named after Commodore Capstone?”

Well, now you know who Capstone House was NOT named for. In an episode from season 3 we talked about Capstone’s construction and how it really got its name. The president back then, Tom Jones, referred to the group of  high-achieving honors students who first lived there as the “crowning stone of the university.” It was a relatively short leap from that to Capstone.

By the way, I did a quick search on eBay, and for a few bucks you can still buy one of those famously incorrect Commodore Capstone postcards printed in the late 1960s.

Also by the way, this was not the first time that a newspaper had chastised the university for its building names. In 1848, exactly 120 years before the now-infamous State newspaper editorial about Commodore Capstone, the editor of The Telegraph, a Columbia newspaper of that era, commented on the awkwardness of building names on the Horseshoe.

That worked well enough, but when subsequent buildings were constructed on either side of the Horseshoe, the naming convention got tricky. You had Old South and New South, Old North and New North. And because each building had wings with apartments for the students, there was the East Wing of Old South College, the West Wing of New North College … and so on.

The editor of The Telegraph suggested naming the buildings for prominent alumni, and the college’s trustees apparently liked the idea. By 1852, several of the names we’re familiar with had been adopted, such as Rutledge and DeSaussure along with Harper, Elliott, Legare and Pinkney.

As if I haven’t given you enough building name trivia, here’s one more tidbit: One of the buildings singled out in the 1968 editorial never got a new name. South Tower, a residence hall on Bull Street that was built in 1965, is still called South Tower.

I spoke with Elizabeth West, the university archivist, and she noted that most dormitories on campus in the 1960s had been named for individuals, which made South Tower something of an anomaly. Residence halls built since then have names that signify their location or purpose — there’s East Quad and South Quad and the Green Quad, which focuses on sustainability. There’s also the Honors Residence Hall and 650 Lincoln, located behind the Coliseum. Incidentally, the residence hall located at 700 Lincoln has recently been named in honor of Celia Dial Saxon, an African American educator who received her teacher training at the Normal School on campus during Reconstruction.

Is it the start of a trend to, once again, name residence halls for individuals? We’ll have to wait and see on that. The new Campus Village residence hall complex is under construction on the south side of campus and scheduled to open in 2023. Maybe those four buildings will end up with names.

That’s all for this episode. Next time on Remembering the Days, we’re going to take a tour of several not-so-secret gardens across campus. We’ll tell you how they came to be, what’s planted in each one and how to find them. Until then, I’m Chris Horn — thanks for listening and and forever to thee.

Postscript: A book titled Correct Mispronunciations of South Carolina Names, by Claude and Irene Neuffer, says  Capstone House had another name in its early years: the "Adult Merry-Go-Round," no doubt a reference to the revolving restaurant atop the building.