From swimming lessons to life lessons

Jean Livingston, junior BSN student and member of the USC Women’s Swim Team, comes from a family of swimmers. Her father swam in high school and college and an uncle and aunt own a swim shop and have worked as swim coaches. Though Jean has been swimming her entire life, she didn’t begin competing until she was 13. She began swimming for her high school team and then a club team and never looked back.

It’s not unusual for Jean to spend upwards of five hours training in a day, plus time for extra workouts and nutrition in order to stay on the top of her game. In addition to the physical demands of swimming competitively, the mental and emotional stress can be draining. But all the work that she puts in just makes the rewards even better.

“When you see your time and realize what you’re capable of and know that all your hard work has paid off, it’s an incredible feeling,” Jean said.

Hard work, long hours and the value of teamwork aren’t new for Jean, which will serve her well as she works toward finishing her bachelor’s degree and entering the nursing workforce. After she graduates in 2017, Jean plans to work for a few years before returning to graduate school.

Before coming to USC, Jean wanted to become a family nurse practitioner. But after a class visit to the South Carolina Department of Mental Health, Jean found a new goal—becoming a psychiatric nurse practitioner. No matter where she ends up, nursing is her calling.

“I want to do something that makes an impact on someone’s life. I want to have a connection with people.” 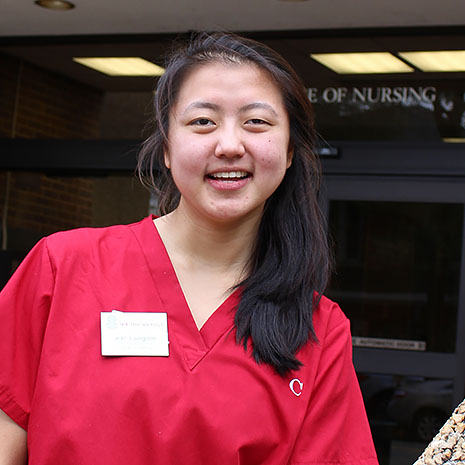