Lifting weights could be the key to better health for women with a common hormonal disorder.

In her previous career as a gym owner and fitness trainer, Wright helped clients with polycystic ovary syndrome, a health condition associated with irregular periods, obesity and elevated levels of the male hormone androgen, which can lead to excessive facial and body hair and infertility issues.

These symptoms can cause women to feel less feminine and depressed, and “they just don’t feel good about themselves as a woman,” she explained.

Now she aims to apply scientific analysis to test the benefits of resistance training for PCOS patients, which she thinks could improve disease symptoms, prevent its progression and reduce their risk of developing chronic diseases such as diabetes and cardiovascular disease.

Although exercise is recommended as a first-line treatment in PCOS clinical guidelines, the type, intensity and frequency of the activity is undefined, she said. Based on studies of post-menopausal women and male athletes, Wright theorizes that resistance training could disrupt the uptake of the excessive androgen and improve patients’ side effects, such as hair growth and insulin sensitivity.

To begin, she is analyzing current literature about PCOS patients and exploring the psychological effects of the disease. Her ultimate goal is to design and test an exercise-based intervention for the PCOS population, combining her experiences in counseling, rehabilitation, fitness and nursing to benefit patients.

“My whole goal has been to learn all the parts of the health care continuum and put all of that knowledge and skill together in one career.”

Once an overweight child, Wright became an exercise advocate after transforming herself through fitness, which boosted her health, energy and self-image. After placing second in the nation in body building, she retired from competition in 2009, ending an 18-year career.

She earned degrees in counseling and rehabilitation before returning to school to study exercise science. She opened a gym in Lexington and trained clients with various health conditions, using exercise as a tool to improve health markers such as mobility, bone density and weight.

Former Gov. Nikki Haley appointed her to the South Carolina Athletics Commission, where she serves as its only female member. Using research to support her positions, Wright has successfully championed changes for female athletes, such as eliminating a pre-bout Pap smear requirement for fighters. In addition to the state commission, she serves on the medical committee of the Association of Boxing Commissions, a national organization.

About 10 years ago, in pursuit of a new challenge beyond the gym, Wright enrolled in the Bachelor of Nursing program at Carolina and has worked at the Palmetto Health Baptist and Lexington Medical Center emergency departments. 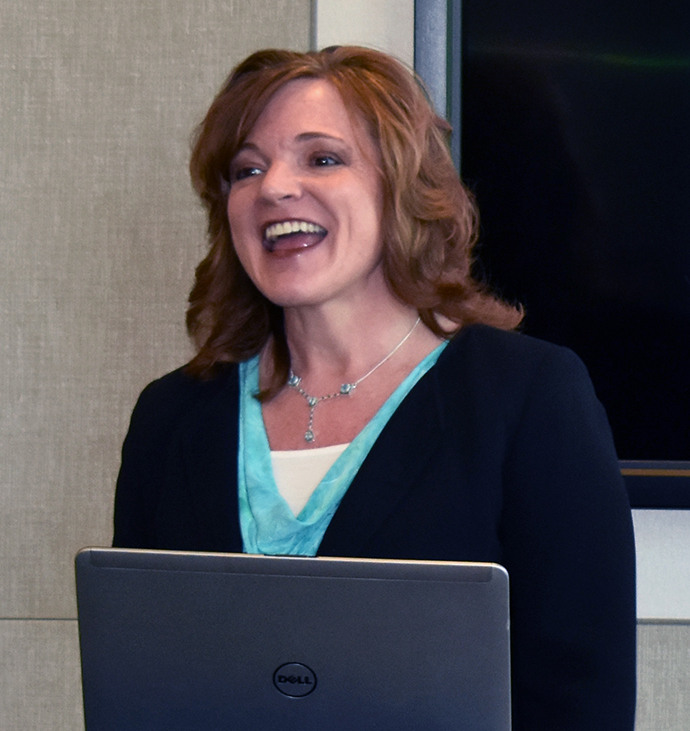 Pam Wright presented her work at the College of Nursing's Research and Scholarship Day.