Access to quality health care may be expanded for low-income and rural patients in South Carolina because of a new law effective July 1 that expands the scope of practice for advanced practice registered nurses.

The legislation, sponsored by Sen. Tom Davis, R-Beaufort and Rep. Gary Clary,
R-Pickens, removes or modifies certain restrictions on nurse practitioners, certified nurse midwives and other APRNs, allowing them to practice towards the full extent of their education and training, said Stephanie Burgess, Ph.D., associate dean for practice and health policy in the College of Nursing.

Increasing care access is critical in South Carolina, which in recent years slipped from a ranking of 42 to 44 on the United Health Foundation’s health report card and is grappling with a surge of 800,000 patients stemming from the Affordable Care Act, she said. In an effort to tackle these challenges, Burgess helped to organize the Coalition for Access to Health Care, whose multi-year lobbying effort led to the bill’s passage in May.

“Rural care is in a crisis. I think this newly enacted bill will help bring health care along the continuum and out of this crisis because it will provide greater access to care.”

- Dean Jeannette Andrews, on the particularly great need for providers in rural areas.

Key provisions of the new law include eliminating a 45-mile radius limit between APRNs and physicians and increasing the number of advanced nurses a physician can collaborate and work with from three to six at any given time. Those restrictions have made it difficult for nurse practitioners to care for patients in remote areas of the state and, in some cases, forced health clinics to close.

Parts of all of South Carolina’s 46 counties are designated as underserved by the state’s Department of Health and Environmental Control, and the need for providers offering primary care, mental health and obstetrics and gynecological services is particularly acute, according to DHEC maps and statistics from the American College of Obstetricians and Gynecologists.

South Carolina was one of several states in 2018 that approved legislation removing practice barriers for APRNs. The key to the bill’s success this year was securing broad-based support and coordinating the advocacy effort with help from professional lobbyists, said Burgess, who gained legislative experience championing 1990s reforms that granted prescribing authority to nurse practitioners.

For instance, prior to the bill’s introduction, the three deans of the state’s colleges of nursing met with top leaders in the medical community to explain the nursing perspective on the state’s health care needs, including explaining recent Federal Trade Commission rulings that call for less restrictive regulatory models governing APRN practice, Andrews said.

Building on that dialogue, the coalition met with physician groups and hammered out a compromise that satisfied both parties, Burgess said.

Scores of patients also wrote letters to their legislators asking them to pass the bill while business leaders across the state gave speeches urging for reform and physicians testified in support of the bill, Hopla said.

Momentum for the legislation soared when Gov. Henry McMaster endorsed the bill in February, noting that access to health care was vital to the state’s growth and economy, Burgess said. “People want to come, and they want to work,” he said. “Well, they need to be healthy.”

Burgess and Hopla are now turning their attention to developing practice agreement templates and other guides to facilitate the transition for APRNs. Once nurse providers begin offering expanded services, the next challenge will be to conduct robust research and analysis to demonstrate the effectiveness of nurse-led care, Andrews said.

Implementation will also create opportunities for innovation in health care delivery with the interprofessional team, she said.

“Working together, one of the benefits of passing this bill is that we can continue to work on health care delivery so that patients see the right provider at the right time and have a much better health care experience from wellness and prevention to sick care,” she said.

“We want to let our interprofessional team optimize their talents and skills to help patients across the spectrum from cradle to grave and enhance their care outcomes. I see that as a great win for South Carolina.” 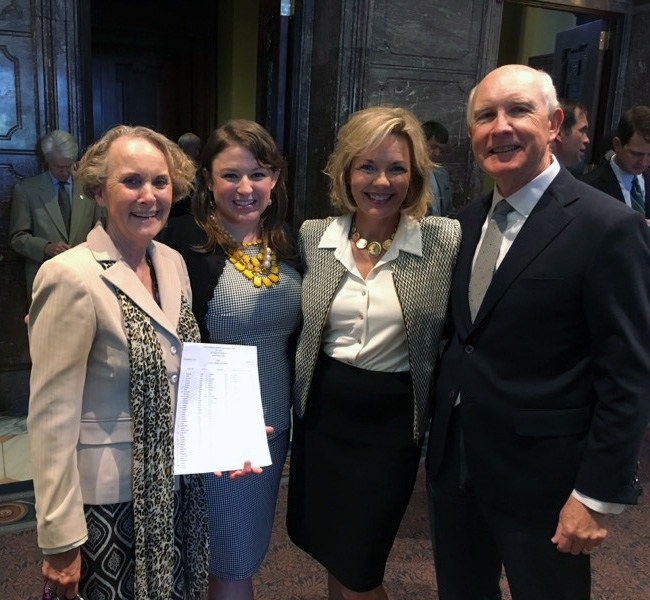