He Won a National Title at UofSC: Now He's Working as a Nurse During a Pandemic

On Jan. 25 at 2:13 p.m., Hudson Thomas entered the world — born at the same Charleston hospital where his father works as a nurse anesthetist. The moment changed Brady Thomas instantaneously. A first-time dad, Thomas, 32, said the love and emotion he felt for his newborn son overwhelmed him. Then Hudson came home, and within a few weeks, the entire world changed. Suddenly, going to work meant putting on an N95 mask, a face shield, gown and shoe covers. It meant working in the airways of patients who were under investigation for a highly contagious and potentially lethal virus.

One day, Thomas was asked to float over to the very wing where his wife, Sarah, had given birth. The wing had transformed into a backup COVID-19 unit. The room where Hudson took his first breaths had been converted into a negative-pressure isolation room. “It was kind of surreal to see that stuff,” Thomas said. “He was probably the last one to be in there. Thankfully we didn’t have the surge (in COVID-19 cases) that we thought we were going to have. They did everything protective to try to keep that spike from reaching us, and I think they did a really good job.”

Gamecocks fans should remember Thomas as a catcher and veteran leader on the 2010 and 2011 national championship baseball teams. In a recent virtual reunion of those College World Series teams with The State, Thomas’ teammates called him one of UofSC’s “glue guys.” South Carolina athletic director and former baseball coach Ray Tanner added: “Brady was very responsible. He was our go-to guy.” Today, Thomas belongs to a much different sort of team. He works as a certified registered nurse anesthetist, spending the bulk of his time at the Medical University of South Carolina’s Ashley River Tower in downtown Charleston.

Three days a week, Thomas wakes up at 4:30 a.m. and works a 13-and-a-half-hour shift. Under normal conditions, balancing those hours and helping to raise a newborn child would be demanding, but the rise of COVID-19 pushed those demands into a higher stratosphere. Thomas said he was grateful for the way his hospital approached the virus early on, shutting down elective surgeries and providing an element of protection for Thomas and his coworkers. Diagnosed with ulcerative colitis as a freshman in college, Thomas takes the immunosuppressive drug Humira, placing him in a more vulnerable population during this pandemic. While he hasn’t worked with confirmed COVID-19 patients, Thomas did work with patients under investigation for the virus in the days before testing became more readily available. He called the experience “nerve-wracking,” knowing he could potentially catch the virus and spread it to his family.

In the last couple of months, his wife has been especially — and understandably — protective of young Hudson. “She’s making me strip down before I get into the house, in the garage, saying, ‘Don’t look at us, don’t touch us, go straight upstairs, take a shower, and then we can socialize,” Brady said, laughing.“I’ll tell you what, my wife has done an incredible job. It shows you how strong she is. When I work, she’s the one getting up during the night, she’s letting me sleep, and she doesn’t have to do that. She’s been an absolute rock. She’s been incredible.”

A couple of weeks ago, in between 13-hour nursing shifts and innumerable diaper changes, Thomas found a little time to reminisce. His mother texted him that the SEC Network was re-airing the 2010 and 2011 College World Series championships, which featured South Carolina defeating UCLA and Florida, respectively. “I was watching back — and just unreal memories,” Thomas said. “It hits me more now looking back, being older. It’s just an incredible feeling to be able to do that for our fans, our school, our state. Just unbelievable. “I hate to say it’s more special now, but it’s just a different feeling and a different appreciation. ”After spending his freshman and sophomore seasons at Florida State, Thomas transferred to South Carolina for the final years of his collegiate career and batted .313 in 131 games with the Gamecocks. While not known as a power hitter, Thomas had a knack for sparking the team with key hits in pivotal moments. In UofSC’s title-clinching, 11-inning win against UCLA in 2010, Thomas initiated a game-tying rally in the eighth inning with a pinch-hit single. A year later, he went 2-for-4 and drove in a run in USC’s title-clincher against Florida.

Born into a baseball-loving family that watched the College World Series with regularity, Thomas cherishes his college experiences, especially being able to win the final CWS ever played at historic Rosenblatt Stadium. He credits Tanner and the rest of the coaching staff for instilling an attitude and work ethic that he and his other former teammates carry to this day. It’s a testament to the special nature of those 2010 and 2011 teams that, even a decade later, Thomas still gets recognized by the occasional patient and coworker for being a Gamecock.“It does come up, believe it or not, 10 years later,” Thomas said. “People will be like, ‘Were you the catcher?’ Or subtle things like that, and I’ll say, ‘That was a long time ago, though.’“It’s pretty neat to still be recognized for it. For diehard Carolina fans, it’s something that they’ll probably never forget. We won as players, but I know that was the first major championship for the school, so I know the fans were waiting a long time for that to happen, and we were able to give that to them.”

The post-baseball plan was always to become a Certified Registered Nurse Anesthetist. While in college, Thomas spent many of his Christmas and summer breaks shadowing family friends who worked as anesthetists. He observed their schedules and lifestyles and visualized himself in that same role. “I knew it was a rigorous course to get there,” Thomas said. “but why not give it a shot?” The past couple of months have been rigorous in their own right, with Thomas balancing newfound fatherhood and medical work during a pandemic. But there are signs that the clouds are beginning to part.

New antibody tests and an overall increase in access to testing have spurred a safer work environment. Now Thomas and his coworkers know for certain whether a patient is positive for COVID-19. Elective surgeries are picking back up. Patient volume is nearly back to full steam. Dangers lurk for every medical professional during these times, but Thomas insists he’s nothing but grateful. He said he loves his job and knows how fortunate he is to have one given the current economic conditions. Even more, he’s grateful to be able to come home to his baby boy — even if he has to shower before he can see him. “It’s been special for us,” Thomas said. “Just watching him with my wife and the way she responds to him, it’s hard to put into words how special it is.”

From The State. © 2020 McClatchy. All rights reserved. Used under license. 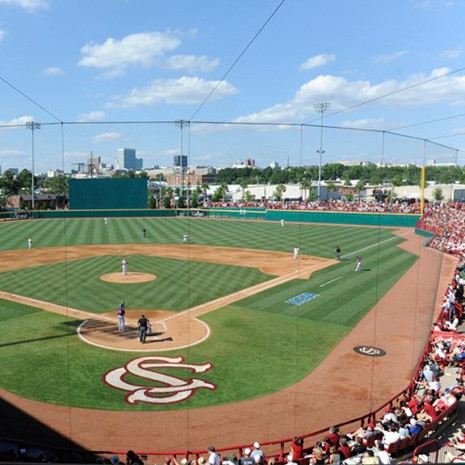 “I was watching back - and just unreal memories,” Thomas said. “It hits me more now looking back, being older. It’s just an incredible feeling to be able to do that for our fans, our school, our state. Just unbelievable. “I hate to say it’s more special now, but it’s just a different feeling and a different appreciation.” - Brady Thomas