New York was originally home, until we moved to South Carolina when I was younger. Many relatives and friends are still in New York and New Jersey. When I told my family in South Carolina that I was going to go up north to help take some of the strain off of the nurses during this time, my family absolutely flipped out. I told them, "I have to."

My mentality is very simple; I know the strain that is felt during a shift where we are short a nurse or two and I could not imagine being short staffed with units popping up out of nowhere. Not only that, but for these hospital workers to have so much fearfulness and uncertainty while this hits their backyard, just left an uneasy feeling inside me. As a full time travel nurse for over three years now, I never know exactly what I'm getting myself into but this was the craziest storm I've ever seen.

The hospital I'm at was completely COVID-positive patients. Normally, this hospital has a 16-bed ICU that usually runs at ten beds occupied. When I arrived, the entire floor was converted into two ICUs and a step-down ICU. Everyone was intubated, on anywhere from 5-8 critical drips; paralytics, sedation, pressers, etc. We had three patients a piece like that. These patients were the most delicate patients I have ever seen in my five years of nursing. We even had a prone team. Yes, patients lying flat on their faces. Just bizarre to fathom. My first day, I just remember "code blue" being called every 30-45 minutes. "Rapid response" followed by "anesthesiologist to room xyz" was another repetitive page, meaning the patient was going to be intubated. But where the heck are we putting this patient!?

Deaths, so many deaths. As a chemotherapy/oncology nurse, I am used to deaths and see it often. But in the three weeks of being in New Jersey to care for COVID patients, I have seen way more people die than I have in my nursing career so far. I've done more chest compressions in these three weeks than I have in my almost five years as a nurse. At first, it was the elderly, the obese, the people who were unhealthy on the daily basis. Then, it became healthy people. Young people. There was a time where the code was ran on the patient basically my age, for two hours. He didn't make it. The massive, white, meat freezer truck outside...full of dead bodies, the morgue full and bodies on stretchers with ice bags on top, waiting for the next freezer truck to come. It was the most obscene thing to witness, right here, in the USA. A total war zone. I've woken up every night, between 0200-0300 since seeing that.

As a nurse, saving lives is the goal. With COVID ICU patients, you run around feeling crazy, defeated, exhausted. I've had to learn quickly that this virus has no prejudice. It does not discriminate to age, race, sex (although majority have been male). There is no saving everyone. Their lungs are deteriorating; the x-ray is as if you are looking at a blank piece of white computer paper. Their kidneys immediately go into failure. I shake my head as I type this. But the most memorable part of all of this is the empathy for the relatives and loved ones, because no one was allowed to visit. Since I felt so defeated on not being able to help save many lives, I did the next best thing I could; hold the hands of the patients as they took their last breath, so they wouldn't have to die alone.

There is just one patient that I have gotten to extubate who is still alive on a step-down unit. I've gone to that patient's new room to visit and the things he remembers hearing while intubated...wow. I could only imagine how fearful he was. Truly cannot wait until he gets to be home with his family. As of now, the hospital has only had one patient successfully discharged that was intubated on the vent. All these losses makes the rare wins even sweeter.

With places like NY/NJ, where everyone was basically blindsided by the events of the last five weeks and so much damage has been done, it's hard to think there is an ability to make an impact here. BUT, I know an impact can be made to all the other states that have been blessed so far, including South Carolina. Please, take your health seriously! Eat healthy, go on walks, start including cardio. Do things to strengthen your heart and help the capacity of your lungs. Medicine is such a band-aid, but lifestyle choices are the cure.

It's funny, in a twisted way, that so much of this COVID chaos could have been and could be avoided if people did what they were told in kindergarten: wash your hands, cover your cough, sneeze into your shirt. It blows my mind that as people get older, all the basics go bye-bye. Nurses, just because you have PPE does NOT mean you are exempt from getting this virus either. We have had staff become sick and even had hospital staff pass away. That was even more devastating to watch, because I was working alongside their people, who had to care for the members of their work family. I wish that more people in health care could use these various platforms of media to actually educate and convey the news that helps people be smarter rather than fearful. There is hope!

The staff at Mountainside in Hackensack, New Jersey, have been nothing short of amazing, welcoming, genuine and grateful. I will always remember the tears in the eyes of nurses as they said, "thank you for coming to help," and, "seeing you guys let me breathe a sigh of relief." This is such an awesome facility, and although this horrific experience has happened, I am forever thankful to have met this new family. There are no words to explain what everyone has gone through, together.

Be kind to each other, have each other's back, work as a team and remember, you are a NURSE!

"Be kind to each other, have each other's back, work as a team and remember, you are a nurse!"
- Rosina Fadul 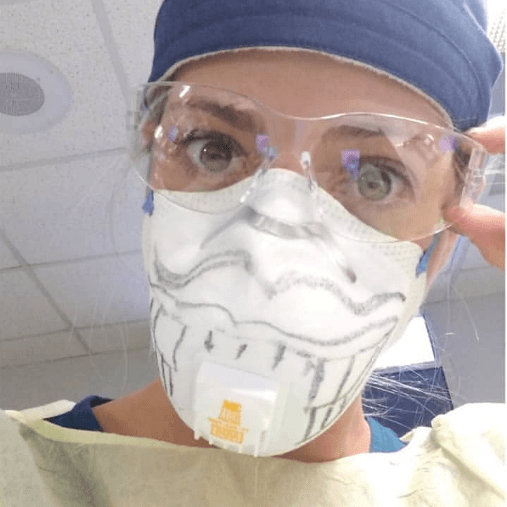 Rosina Fadul on shift at Mountainside in Hackensack, NJ.