Building a successful acting career, 1 step at a time 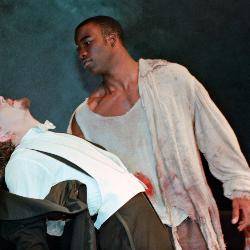 Theater alumnus Mike Colter has gone on to success in film and television after getting his start on the UofSC stage in the 1990s.

Professional actor and 1998 theater graduate Mike Colter will be hosting a question-and-answer session that is open to the public.

“There are people who just have the knack,” Colter says. “Actors are born. You study to free the talents you have, but there’s no one-plus-one-equals-two formula that creates a successful actor.”

For Colter, it was a combination more resembling calculus with a lot of unknowns.

He was at Columbia’s Benedict College when a theater professor there, Scott Blanks, suggested he go to Carolina, which Colter did starting in his sophomore year. A collection of professors at Carolina encouraged and supported him in his efforts to get an undergraduate degree in theater.

Then came the stroke of luck. A graduate student who was expected to do most of the leading-man type roles for the coming season left school.

“I don’t know why he left, but they needed a leading man, a tall guy and that opened the door for me,” the 6-foot-3 Colter says. “I got roles that I never would have gotten as an undergraduate.”

Those who remember Colter from his Carolina days say it was more than luck that led to his successful career.

“Mike was serious about his approach to training as an artist from the very first and he did not want to miss the details,” says Jim Hunter, professor and chair of the theater and dance department at Carolina. “I think this commitment to specifics, knowing that skipping a step was not moving solidly toward his goals, is one element of his success.”

After graduating from Carolina in 1998, Colter earned his MFA at Rutgers’ Mason Gross School of the Arts. While he says that degree enables him to teach if he should find himself again in need of gainful employment outside of acting, he didn’t plan it that way.

“I didn’t have a Plan B,” Colter says. “I know that’s probably not very smart, not to have a safety net.”

Hunter says there was no need for a Plan B because Colter followed Plan A so well.

“He built a solid foundation for his successful career at each step along the way,” Hunter says.

Colter’s success has led to him being named a Distinguished Young Alumni of the university, an honor he says means a lot to him because it lets him recognize many of the people who helped him along the way.

“This is more about coming down and saying thank you to people who will be attending,” Colter says.

A native of Columbia, Colter played a boxer in the Academy Award-winning “Million Dollar Baby,” a Navy SEAL in the Oscar-nominated “Zero Dark Thirty,” a drug lord in the television series “The Good Wife,” and has just finished filming a pilot for TNT called “Agent X” with Sharon Stone.

“Pilot season is very stressful,” Colter says. “You just have to constantly go out and do what you have to do and be prepared for rejection.

“Every time out, you have to prove yourself but prepare for the worst.”

As Mama Rose would say, “Either you have it, or you’ve had it.”