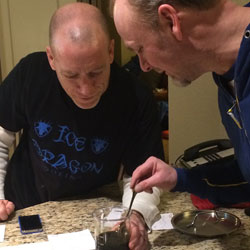 The cool future of nanofluids

Andy Hayes and Dale McCants work on a nanofluid coolant prior to attending the 2015 Consumer Electronics Show in Las Vegas.

Andy Hayes and Dale McCants have been thinking small for quite some time. Literally. Now, the two University of South Carolina mechanical engineering doctoral program alumni are ready to go big — really big — and they’ve got some pretty cool ideas about how to do it.

Hayes, who works for NASA as a thermal engineer, and McCants, who teaches thermodynamics at Carolina, are champions of nanofluid technology, which uses tiny, specially-shaped metallic nanoparticles suspended in liquid to increase heat transfer within an electronic system. It’s the kind of technology, they say, that could one day be used to cool everything from motorcycle engines to computer server farms and large buildings.

At the moment, though, the two are best known for their product Ice Dragon, a nanofluid cooling agent employed by serious computer gamers seeking a competitive edge. The product works by allowing gamers to overclock, or run their gaming systems faster, without overheating.

“When your system is at, say, 45 degrees Celsius, and mine’s at 43, I might be able to push mine a fraction of a second faster,” says Hayes. “That’s really all it takes when you’re playing these online games.”

Since debuting Ice Dragon at the 2010 Consumer Electronics Show in Las Vegas, where it was named one of that year’s top five innovations, the product has been picked up by distributors in the United States, Europe, Japan and China. The coolant is also used by a pair of computer and electronics manufacturers, Origin PC and Steiger Dynamics, both of which offer it as an option on customized systems.

“A lot of people in the gaming world were skeptical at first because they didn’t know much about nanofluids, but we let the results speak for themselves,” says McCants, who currently heads up the senior design capstone class at Carolina's Mechanical Engineering Department. “Because we had done so much research and so much testing, we basically challenged people to test it themselves and write about the results online.”

After building the brand for the past five years, Ice Dragon started turning a profit in 2014. Hayes and McCants, though, see possibilities far beyond the gaming industry. The next step, they say, is to demonstrate nanofluid’s viability as a cooling liquid for HVAC systems in buildings, where preliminary studies suggest they could reduce energy consumption by between five and 10 percent simply by swapping out traditional coolants for their product.

To make their case, they have already identified a building on the Carolina campus where they plan to test the product on a larger scale. The same nanofluid currently used to help gamers swing their swords faster in online games could be pumped into the 20-ton chiller of the HVAC system at Carolina’s War Memorial building later this year. Hayes and McCants are also talking to the military about running tests at Fort Jackson.

“From the beginning, we had a goal to do something big,” says McCants. “Most large buildings are liquid cooled — on military bases, in cities, on college and university campuses like our own-- so if we can show that this works and get it out there, it’s going make a huge impact. That’s sort of our life goal.”