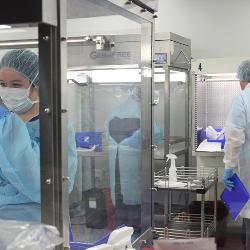 If you saw the sign for the facility in the basement of the Coker Life Sciences building — the ACE Lab — without any context, you might wonder if novice cardsharps go there to learn the latest in sleight-of-hand. But there’s a much more serious kind of training going on in the South Carolina College of Pharmacy’s new Aseptic Compounding Experience (ACE) Laboratory.

The University of South Carolina’s cutting-edge facility was planned and constructed partly as a response to a deadly fungal meningitis outbreak caused by the New England Compounding Center in 2012. Because of the center’s improper compounding procedures, more than 700 people nationwide were sickened from tainted steroid injections, with at least 60 deaths linked to fungal contamination. Carolina’s ACE Lab is providing the hands-on training needed to help prevent such a disaster from occurring again.

Compounding is a common — and essential — practice in health care. “Nearly every hospital has a clean room for sterile compounding,” says Michaela Almgren, clinical assistant professor in the South Carolina College of Pharmacy. “Just about any medication that comes in an IV bag has to be put together in a clean room. The compounded medication is usually prepared for a specific patient and will contain a patient-specific dose.”

Typically, the compounding process involves taking a commercially produced medication provided in a sterile form from the manufacturer and dissolving or diluting it in saline or some other aqueous solution. The proper amount can then transferred into a container — such as an IV bag or a sterile vial from which it can be infused or drawn via syringe — intended to provide a precise dose to an individual patient.

With a pill, getting the right dose of a medication might be as simple as taking more than one or using a cutter to take just a fraction of one. Oral medications travel through the gastrointestinal tract, a gauntlet for microbes designed to wipe out small amounts of harmful pathogens that might be clinging to whatever gets popped into the mouth. As with handling of food, clean hands, clean tools and a clean workspace are generally enough to pass muster when pills are being handled.

If a medicine is going to be injected, though, it goes straight into the bloodstream. Without the last line of defense that the gut provides, even the tiniest amount of bacteria, fungi or viruses can pose a lethal threat.

The ACE Lab has a clean room and the equipment that allow students to learn how medications need to be handled and transferred in a sterile environment to eliminate that threat. Those entering the facility run through a process akin to that of an operating room — they scrub their hands like a surgeon and cover the body with a sterile outfit, including shoe covers, gown, gloves, facial mask and cap.

The clean room itself is scrubbed down, ceiling to floor, on a regular schedule and tested routinely for contaminants. The air is HEPA-filtered, and more than a dozen sophisticated ventilation hoods have even more highly purified air pumped into them for working with sterile syringes, vials and medications.

The facility and system require constant monitoring and workers using the proper procedures to ensure the compounded medications are safe for injection. That requires a lot of training, which the ACE Lab accomplishes with a true hands-on experience.

“Properly washing, gowning and covering yourself, and working in the hoods in a way that minimizes the risk of contamination, is a complex procedure,” Almgren says. “It might seem simple, but there’s a lot that goes into it.”

Many other schools don’t even have a proper laboratory for learning correct methods, Almgren says. Some simply use computer simulation software for instruction.

The ACE Lab, which opened last spring, ensures that South Carolina College of Pharmacy students get a full immersion experience in compounding before graduation. And through the Kennedy Pharmacy Innovation Center, licensed pharmacists and pharmacy technicians are being brought in for training as well.

“Everyone that sees this lab is really impressed,” Almgren says. “There aren’t many pharmacy schools that have anything like the fantastic facility that we have here.”