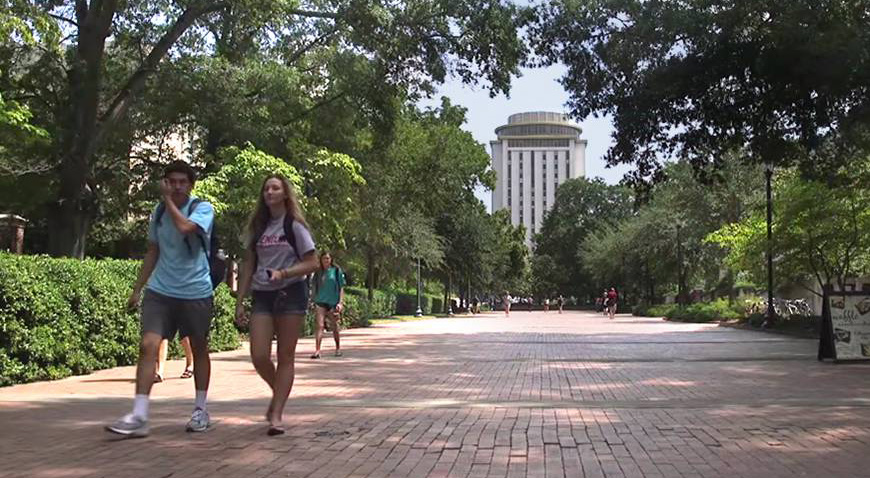 John Stathopoulos was afraid of heights — still is, probably — but early in his first semester of college he met several other Carolina freshmen who shared his acrophobia. The living-learning community they had joined was all about taking on personal challenges, so instead of spending their college years avoiding high places, the students found one 14,000 feet up — and jumped.

“I still cannot believe I put myself through that, but in the end it was worth it. I can now check skydiving off of my bucket list,” says Stathopoulos, who graduated from Carolina in 2014 and is now in his second year at the university’s School of Medicine in Columbia. 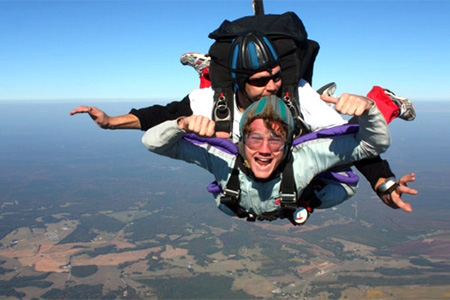 John Stathopoulos was afraid of heights — still is, probably — but early in his first semester of college he met several other Carolina freshmen who shared his acrophobia.

The campus community he and his skydiving pals were part of — Capstone Scholars — is celebrating its 10th year as one of the university’s most popular programs for high-achieving students looking for something more in the college experience. Based on comments from alumni and current students, it sounds like they’re finding it.

“Capstone pushed me to become involved in clubs and organizations, inspired me to participate in leadership roles and created opportunities that wouldn't have been available otherwise, all while providing me with a strong community of support and lifetime friendships,” says Kelly Brittan, a 2014 graduate who now works for the PwC accounting firm in Columbus, Ohio.

“My current workplace closely mirrors the Capstone environment, and it wasn't until after graduating that I truly realized how my experience at Capstone helped me to develop into a successful professional.”

Jory Fleming, a marine science/geography junior especially liked the one-on-one time he got in Capstone. “They have a dedicated staff that wants to mentor you and invest in you,” he says. “They want you to dream big and leave your legacy, and they actually show you how to do that.”

Savannah Turner, a 2015 nursing graduate, is still soaking up the rays from her time in Capstone: “I met the majority of my closest friends from college through the Capstone Scholar Program in one way or another. These are friends that I know that I will have for the rest of my life.” 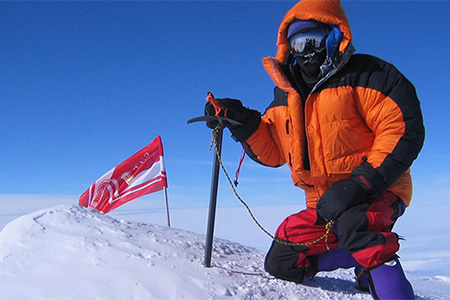 Patrick Hickey didn’t let his own fear of heights get in the way, and soon afterwards he was climbing mountains with a passion.

Nursing professor Patrick Hickey became the second principal of the program in 2009, succeeding now-retired statistics professor John Spurrier, and spent his first semester getting to know the students. “Who did we have? What were they like?” he says. “I realized that they had potential but they weren’t pushing themselves very hard. So I asked them to take on a personal challenge.”

Overcoming obstacles is part of Hickey’s DNA. An outdoorsy guy, Hickey was vacationing with his wife in South America years ago when the opportunity to climb a mountain presented itself. Hickey didn’t let his own fear of heights get in the way, and soon afterwards he was climbing mountains with a passion. He’s now one of only about 120 people in the world who have climbed the world’s seven summits (the highest peak on each continent) and the only nurse to have done so. He wrote a book, “Seven Summits: A Nurse's Quest to Conquer Mountaineering and Life,” about the climbs and the lessons learned.

I realized that they had potential but they weren’t pushing themselves very hard. So I asked them to take on a personal challenge.

Hickey asked the Capstone Scholars to take on challenges based on seven categories from the book in which he outlines the need for a balanced life, physical wellness, goalsetting, positive attitude, realization of potential, desiring success and creating a legacy.

The idea of taking on challenges that develop one or more of those areas resonates with parents and students. “In a practical sense, taking on personal challenges generates experiences that build confidence and can help pave the way for internships and graduate study,” Hickey says. As a sign of the times, he notes, “we’re seeing some of our students taking selfies of doing their personal challenges.”

Hickey is tapping into the more than 7,000 personal challenge statements that Capstone Scholars have submitted over the years as part of a new book he’s writing, tentatively titled “The Path to Student Success Starts with a Personal Challenge.” Hickey plans to use proceeds from the book’s sales to help fund Capstone Scholars scholarships. 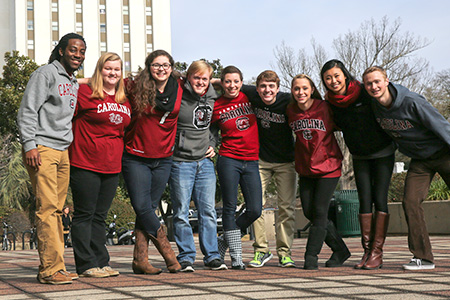 Scholars attend Capstone Conversations, featuring interactive discussions with guest speakers, engage in community service together and have the opportunity to participate in Capstone-only study abroad trips, usually in the summer.

There’s more to the Capstone Scholars Program than personal challenges. Scholars attend Capstone Conversations, featuring interactive discussions with guest speakers, engage in community service together and have the opportunity to participate in Capstone-only study abroad trips, usually in the summer.

Students also can apply for Magellan Apprentice grants, $1,000 stipends for undergraduate research that are exclusively for Capstone Scholars. Passport Travel Grants of $2,000 enable scholars to defray the expenses of study abroad. And through a partnership with the Career Center, the Capstone Scholars Program shares the stipend cost with employers for internships and co-ops.

Capstone Scholars also have their own sections of University 101 — associate principal David DeWeil won the U101 Teacher of the Year award in 2014 — which helps create more bonds among the 800-plus freshman group.

Capstone Consultations launched this semester with each Capstone Scholar getting an appointment for one-on-one face time with the principal or associate/assistant principals. These informal mentoring sessions are intended to help the scholars map out plans for their freshman or sophomore years (student participation in the program ends after the second year). Participating in the once-per-semester consultations is one of the program’s four requirements along with community service, taking on personal challenges and maintaining a minimum 3.0 GPA.

The thing that’s been the most beneficial is the opportunity to connect with good mentors, to have people say to you in the first two weeks of class, ‘Where do you want to go and how can I help you get there?'

“The more face-to-face time you have with students, the better they tend to do,” says David DeWeil, associate principal for the program. “Personal touch is what we’re known for. We send parents of Capstone Scholars an e-newsletter because we want them to be engaged and aware of what their students are doing.”

Tori Bennett, an international studies and Spanish freshman, was impressed with the immediate attention her Capstone Consultation brought. “The thing that’s been the most beneficial is the opportunity to connect with good mentors,” she says, “to have people say to you in the first two weeks of class, ‘Where do you want to go and how can I help you get there?’”

Students who complete a prescribed list of requirements during their two years as Capstone Scholars can graduate as Capstone Fellows, a distinction noted on their transcripts and diplomas and marked by an honors stole on their commencement gowns.

Beginnings and the road ahead

While the Capstone Scholars Program launched in fall 2005, its genesis goes back to the late 1990s when campus administrators were engaged in a months-long strategic planning session.

Gene Luna, associate vice president for housing and student development and  a staff member on the former Strategic Directions Initiative committee, had seen a similar program at another university and suggested that a new program for high-achieving students might find traction at Carolina. The South Carolina Honors College was accepting only about 250 freshmen at the time, which created a backlog of exceptionally talented students, many of whom were not enrolling at Carolina.

“Not long after SDI concluded, the Student Affairs department hosted an event with the authors of a popular book at the time —‘Millennials Rising’ — and they were discussing some of the attributes of 21st century college students,” Luna says. “We picked up on the fact that millennial-generation students and their parents have an affinity for meritorious titles and programs and that got us thinking again about starting a new program here.”

The first year we were expecting about 300 students, but 500 accepted our invitation to become Capstone Scholars. This year we have more than 800 Capstone freshmen.

Luna was tasked in 2003 with starting the new, as-yet unnamed program, and he reached out to colleagues in University 101 and Study Abroad to lay the foundation. Capstone House was chosen as the residence hall for program participants, and the program’s name followed. Today, both Capstone and Columbia Hall are used to house Capstone Scholar freshmen.

“The first year we were expecting about 300 students, but 500 accepted our invitation to become Capstone Scholars,” Luna said. “This year we have more than 800 Capstone freshmen.”

This year’s freshman class of Capstone Scholars arrived with an average SAT score of 1300 (29 for ACT) and high-achieving high school GPAs.

Luna envisions the program gradually increasing to 1,000 freshmen with major renovations to Capstone and Columbia Hall in the next few years and perhaps a greening of the space between those two buildings to create a commons area. “We could call it Capstone Village,” he says.

Capstone Village? Sounds like an appropriate aspirational goal for a program that encourages high achievers to fulfill their potential.