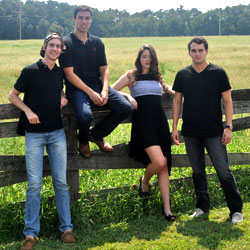 Several UofSC students have formed a band, Mayberry, what will perform at the university's annual State of the University address.

There are plenty of reasons to go to the State of the University, President Harris Pastides annual address to the Carolina community, but hearing the student band Mayberry perform is definitely part of the day not to miss.

May sat down and answered some questions about the band, how the guys got invited to the State of the University and more.

How did the band come together?

Casey Berry and I met our freshman year and used to joke about how our last names put together sounded like a country band. One year later, we started singing together for weddings and small gigs. Without guitar, bass and drums, it was hard for us to become much more. A friend of Casey's mentioned that his friends were looking for a singer, and in October of 2014, Keagan Anderson, lead guitarist, and Sam Crosby, manager, joined the band. They were ecstatic to add not only one, but two singers to their growing band. Keagan and Sam loved the name Mayberry, and so the four of us set out to find the remaining members. Jack Owens, the drummer, attends Davidson College in North Carolina, and is an extremely talented musician that has worked in bands with Keagan before. Casey and I knew Robbie Wilkinson from our a cappella groups, The Carolina Gentlemen and the Cocktails, and brought him in as the bassist in January of 2015. We found out later that the same friend that introduced Keagan and Sam to us happened to be Robbie's resident mentor. We're all pretty amazed at how well we blend together both musically and socially, and we feel blessed to have found some of our very best friends.

What kinds of music do you play? Originals, covers or both?

We are a country rock band that performs mostly covers right now, but we have several originals in the works. We are super excited to share our originals and we hope to have an EP out by the end of this year. We try to put a unique spin on our covers as well, and even won second place in Carrie Underwood's mashup contest last December. She watched our video and sent us a signed CD.

Do you play shows locally?

Yes, we do play local shows, and events around the state. We have played Jake's Bar and Grill, Tin Roof, 701 Whaley, Bill and Busters Tavern and several philanthropic events on the UofSC campus, including the UofSC Love Story Wedding and Up Til Dawn. We have also been invited to perform at the Miss York Pageant and Long Branch Nightclub, in Rock Hill, S.C. Look out for us at some upcoming events this semester as well.

How did you get invited to play at the State of the University address? How did you react when you heard the news?

Casey and I were asked to sing at the inauguration of the new student body president in March of last year, and afterwards we told President Pastides about our band. He then invited the entire band to perform at his commencement dinner in May. We were extremely honored to have been chosen for these special events, and so when we heard the news that President Pastides had requested us for the State of the University address, we were so excited! All of these opportunities allow us to give back to the school that has made our band possible, and we are so grateful for each and every one.

Have you ever been to the State of the University address?

None of us have ever been to the State of the University address, so we are thrilled be a part of it. The musical opportunities we have been given at this school have made our Carolina experience so unique, and they are memories we as a band will remember forever. It's special for us to perform music that is so deeply rooted in our school's history, and we can't wait to share it with fellow Gamecocks.

Why is Carolina home for you?
Carolina has not only given us our band, but also several lifelong friends. I feel most at home when I'm on stage performing as Mayberry. This summer, I counted down the days until I would be back onstage, or even just jamming at rehearsal, with them. We all think it's incredible how we found each other, and how we share the same passion and the same dream for a future in music.

Not only are the members of Mayberry involved with the band, they also spend their time in other groups on campus, including the Cocktails and Carolina Gentlemen. May, Berry, Anderson and Crosby are all members of the Country Music Association Education organization as well.