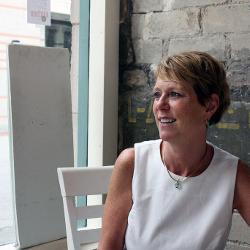 Linn Lesesne returned to Carolina to finish her degree in interdisciplinary studies after more than 30 years in the hospitality industry.

When Linn Lesesne decided to return to Carolina to complete the degree she had started years earlier, she knew she could bring something a little different to the classroom.

For one thing, the interdisciplinary studies major had more years of experience in the hospitality field than most of her classmates had years of life. But she also found herself in a unique position one semester when a young student in the program approached her about an internship at Charming Inns, which Lesesne owns and operates with her husband.

The student spent a summer working without pay for Lesesne.

“She didn’t have to do it. She simply did it for the experience,” Lesesne says. “She is going to go far.”

A native of Charleston, Lesesne says she was not as focused as her intern when she first arrived at the University of South Carolina in 1978.

“I had three majors in two years,” she says. Her grades were not up to par and she told her parents she wanted to take a semester off. Needing work, she found a job as a secretary in the sales office of a Charleston hotel that was part of a national chain.

“That’s where I got my bug for the sales hospitality industry,” Lesesne says. “I just really liked the hotel business and stayed with the company and moved around.”

Her moves included Boston, Atlanta and Dallas in the hospitality industry. She got married, had children, got divorced and came home.

Back in Charleston, Lesesne took a friend’s advice to interview with a small local hotel group. It was there she met her husband, Richard Widman. Their combined family included six children. Waiting for the youngest to finish college, Lesesne began her own pursuit of a college degree.

“I always knew in the bottom of my heart that I wanted to go back to college,” Lesesne says. “I made a big announcement at Thanksgiving. I surprised my family, some Clemson and Auburn fans, with a Gamecock T-shirt on under my jacket and I said, ‘I am going back to school.’ Once I announced it to the family, there was no turning back.”

It was that drive that Glenna Gillentine noticed from the beginning. Gillentine was Lesesne’s adviser in the interdisciplinary studies program in the College of Hospitality, Retail and Sport Management.

“I had a tender spot in my heart for all my nontraditional students coming back,” says Gillentine, now director of internships for HRSM. “I like to help them reach their goal. But Linn had this drive to get this done.”

Lesesne credits Gillentine with helping her to navigate the waters of counting college credits.

“I am forever indebted to her for her enthusiasm,” Lesesne says. “She was very much a mentor to me.”

Lesesne took some classes online and at colleges closer to her home base, but the last three semesters were almost entirely done on the Columbia campus.

Coming back to the campus she had left three decades earlier could have been a bit daunting for Lesesne, but she says it was not because she was sitting in classrooms with folks younger than her own children.

“Nowadays, the age thing doesn’t seem to matter as much,” Gillentine says. “Linn seemed to fit right in with her classmates.”

Lesesne says she felt comfortable with other students.

“Some of them, especially from my management class, are still my Facebook friends,” she says. “What was incredibly intimidating was the technology. I had no idea what Blackboard was. I actually got my children to help me get through some of that.”

She says she wishes her younger self had been the student she was later and that she could impart some of that wisdom to students.

“What I learned is go to class. It’s just a matter of respect for your professors that you show up. And get to know your professors. It is so important in a big university like Carolina.”

Lesesne put on her cap and gown and walked across the stage in May 2015. Her only regret was that her parents did not live to see the day.

“Probably the most difficult part of that day in May when I walked across that stage was that my parents were not there,” she says. “I know they were there in spirit though.”

To learn more about the bachelor's degree in interdisciplinary studies, visit the College of Hospitality, Retail and Sport Management website.