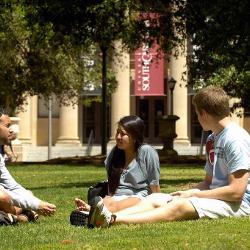 The Carolinian Creed is 25 years old, making this year's celebration of our statement of values a little more special.

For more than 100 years, the University of South Carolina had one primary rule governing the conduct of its students: to refrain from engaging in any behavior that brings dishonor to their fellow man. After women were admitted to UofSC in the 1890s, the Honor Principle called upon students to behave like gentlemen and ladies.

But by the 1960s, one rule no longer sufficed, and Carolina had amassed hundreds of pages of policies prohibiting a variety of behaviors by students, faculty and staff.

“There were so many rules about what not to do, we didn’t print them all out,” says Dennis Pruitt, vice president for student affairs. “You had to come in to the office to read them.”

In the late 1980s, a series of disturbing incidents at colleges and universities across the U.S. alarmed administrators. They sought to learn why this behavior — which included acts of racism, hazing and sexual assault — was increasing and what could be done to prevent it from happening at Carolina.

Pruitt led a group of students, faculty and staff charged with examining students’ relationships with each other, defining Carolina’s values and its expectations of community members and devising a way to describe these to the community.

“This process coincided with the emergence of positive psychology, and we took a similar approach” Pruitt says. “We reversed the traditional ‘what not to do’ and focused instead on what to do.”

Rather than writing an exhaustive list of forbidden actions and their resulting punishments, the group highlighted the university’s community standards and the values the university expects its community members to espouse in their relationships with each other.

The work lasted two years and resulted in the Carolinian Creed, which was approved by the university’s governing bodies and presented to the Carolina community in October 1990.

Pruitt and his colleagues envisioned using the creed as a teaching tool to encourage students, faculty and staff to aspire to behaviors and characteristics including respect, integrity, civility, compassion, empathy, openness, inclusion and concern for the individual.

“These are the ways we want to be treated, and the creed attempts to create a sense of shared responsibility for treating others in the same way,” he says.

Since its adoption, the Carolinian Creed has been lauded by education experts and emulated at other institutions. Ernest Boyer, former president of the Carnegie Foundation for the Advancement of Teaching, recommends that every institution of higher education develop a similar statement.

After 25 years, the Carolinian Creed is as relevant today as it was then.

“It came about during a time we were diversifying the university,” Pruitt says. “We have even more diversity now — low-income students who have to ‘out’ themselves to receive aid; diversity of thought, especially in terms of political, social and cultural issues; students exploring gender and identity; and the intersectionality of these.”

No matter the changes at Carolina, the creed stands as an expression of the university’s enduring values.

There are many activities to celebrate the 25th anniversary of the Carolinian Creed. Check them out and get involved.